Flashback Friday: "Nothing To Loose". 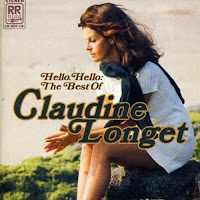 Even though the movie "The Party", starring Peter Sellers, is not one of my favorite ones at all (mostly as I at times find some of the comedy to be a bit infantile and annoying), there is one particular scene in the film, which I adore. It features the serene Claudine Longet, a French singer and actress, in a beautiful performance of "Nothing To Loose", composed by Henry Mancini.

Claudine did enjoy success on the music popularity charts in the 60's. Her 1967 debut album, Claudine, peaked at #11 on the Billboard pop albums chart in the United States. Sadly, in 1976 Claudine was convicted for misdemeanor negligent homicide in connection with the death of former Olympic skier "Spider" Sabich, with whom she was romantically involved at that time. After this personal tragedy she has maintained a private profile.

In any case, the compilation below is very soft and tranquil. Her fragile, feminine voice, as she sings in English, yet her words so saturated with a heavy french accent, give the harmonies and lyrics an inevitably sensual and dreamy feel.
Hope you enjoy it too.

What a sweet song.

Have a lovely weekend Zuzana. Enjoy the sunshine.

it is a dreamy song...i tried to come up with a different word but...it gave me smiles. have a wonderful weekend!

I Remember that film & that part of it.
She has a fine voice.
I hope your week is going well Zuzana?

Beautiful! I hope you have a good weekend!

I love Peter Sellers and yes, The Party is infantile. I love it. ;)

I remember Claudine Longet appearing on many Andy Williams Christmas specials with their kids, even after their estrangement.

I remember the whole Spider Sabich story back at the time. The Rolling Stones wrote a song about it which wasn't released until sometime later.

This was quite the flashback, for sure. :)

I remember her...such a sweet voice.

Ah, yes, Andy Williams ex-wife. She was a pretty, tiny thing wasn't she? She's 68 years old now. Thank goodness someone older than me!

Have a wonderful day Zuzana.

Never heard of her or the movie before in my life! Yet, I like her name ;-) sounds like mine a little bit ;-) Her voice in the music compilation sounds very young, and very delicate though. So sad that these people end up their lives in such controversial, complicated ways.
have a lovely Friday!!
*hugs*

Lovely song Zuzana...thank you for sharing this flashback...one I did not recall.

Yes...truly a tragic loss for all of us! So beautiful! Hope you have a wonderful weekend! ~Janine XO

Ooh la la, what a beautiful French accent! This song is one of those catchy ones that grow on you and you end up whistling and humming it all day. Great choice Zuzana - have a great weekend!

I actually remember the turbulent times of Claudine and Andy Williams. It’s funny how the phrase “Nothing to loose” can have such a radically different meaning in the diverse situations of life.
-
Enjoy your weekend …Blue eyes.

I've never heard of her before but she has a beautiful voice! Interesting bit of gossip about her.

Thanks for the memory! Yes, I was always enchanted by the -- fragile loveliness of Claudine Longet. I do remember the tragedy that cast such a shadow over her life. So sad. As for Peter Sellers, he is the only actor I can think of who can make my taciturn, stern hubby laugh like a little child!
Hope more sunshine is coming your way in Denmark! Have a wonderful weekend! Zuzana, I so appreciate your kind remarks! Thank you!
Hugs,
V
Hugs, V.

At first I didn't remember her, but the second I heard her voice memory of her came flooding back. I loved her voice and seem to remember her singing some other song, but it won't come to my mind.

"The Party" is a family favourite over here (we quote it a lot at each other), and that scene is my dad's favourite of all! Thank you so much for reminding me... I'll send him the link, he'll love it. I love your Flashback Fridays!

Elizabeth, Brian, tony, Jacki, Hilary, LadyCat, Sandy, Claudia, Laura, Janine, Blogaire,
Scribe, sprinkles, V, Stevie and BPG, I am happy you enjoyed the sensual voice of Claudine.;) Thanks to Hilary for the link.

And thank you everyone for taking the time to stop by and listening.;) Your visits and very kind words are always very much appreciated.