The Time Of Anticipation. 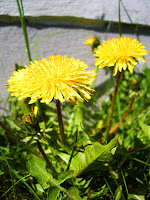 As April leans toward its end and the sun climbs higher up in the sky, spring is reaching its culmination. This at least according to the calendar.
In reality, it is only truly beginning.

After a week of a weather full of contradictions, including even hail and snow, today is sunny, but chilly. It feels as if winter is still present in the air, her icy breath ever so palpable in the wind gusts.

Still, upon closer look, it is obvious that a new season is gaining hold over our landscape. Today I discovered the first wild flowers in bloom. The meadows are full of daisies and violets and just next to my house, the first dandelion could be found basking in the sun, its yellow crown so significant of late spring.
Most of the bushes are now covered in a gentle green hue and cherry tree bloom is imminent.

As we reach the point of no return, while April turns into May, even here the culmination of the season will become ever so apparent. Thus the time of anticipation will begin. 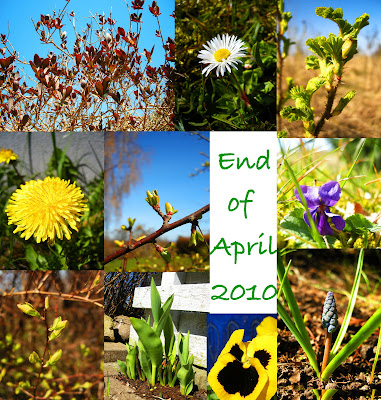 Hey! Your Right. It's MAY next week.Warmth & Light Are Coming.
Have A Fine Day Zuzana.

yeah, its so cool. spent a good bit of time under a tree yesterday with my boys...fishing pole in hand...we had a lot of fun welcoming spring in our own way...its raining today s its definitely acting like it....have a great saturday....

Love the collage. I am a fan of Dandelions. I don't want to hurry spring. Summer here can be quite uncomfortable.
Glad you are finally getting some nice days.
Kat

We are having some beautiful weather here and after a long, hard winter you can almost feel a collective sigh of relief from everyone. I do love the springtime.

Today the skies are dark and rainy. Storms, possibly tornadoes are predicted for this afternoon. But when I look out my windows, I see purple iris blooming everywhere. I also see tall grass and weeds. I needed to get the yard mowed very badly this weekend. Maybe the weather will dry out enough by tomorrow for me to fill the mower with gas and get to work.

Because it's dark and gloomy here the photos of your bright sunny outdoor spaces are quite welcome. Enjoy your weekend!

Yes, a lovely warm day and people are out, cutting their grass, buying garden furniture and getting their barbeques out of the shed!

I thought the weather here had been all over the place but at least we didn't get snow and hail!

Last weekend started out warm and we got up to 80 degrees on Tuesday. That very night we had a heavy rain/thunder/lightening storm. It rained on and off through Thursday. Yesterday the sun came out but was windy and chilly. I had taken my dogs for a walk and was wishing I'd brought a jacket with me. Today is a little warmer but still chilly. So no summer dresses for me today!

I'm noticing lots of flowers and trees in bloom lately, just not in my yard. :(

I was suddenly struck today by the fact that spring had come... And then when I went out, I was shocked to find that it was a hot summer day!
I'm a bit behind the times.

Beautiful photos! We are having a cloudy, raining day here too. But it's fairly warm, so we can have the doors open. Have a great weekend : )

And we have dandilions! Sounds like I have work to do...yikes.
Have a great weekend, Zuzana!
:) The Bach

Next to our house in Norway I found ice in the morning :(
Daytime it's Ok weather, but far from nice flowers out there.
Hope you have a great Saturday evening!

oh, yes, may is about to grace us with her presence - and all things beautiful - such an incredible time of the year here - and in the deep south of this country from whence i hail - i am just returning from a visit home where the fragrance of the blooming trees and plants was just mind bogglingly [is there such a word?] bedazzling! and the visual feast of the redbuds and dogwood and daffodils and azaleas and japanese magnolias and the blooming fruit trees! just magnificent - and there, in louisiana, the world was lush and green and vibrant! full of life and promise! here's wishing all that to all the planet!

Amazing collage!! You have such an eye for photography! I loved it when I lived in Utah and we would finally see the first wild flowers of the season. It was always a sign of true warm weather just around the corner. I also vibrantly remember the first cherry blossoms on the trees. So delightful and almost whimsical. They would make me giddy. Anticipation really is the perfect word for it.

How exciting for your that your favorite time of year is rapidly aproaching! :):)

Wonderful colourful shots you have there...

I miss the seasons, we only have two - Hot and hotter... we are fast approaching hotter!!

whatever the weather is doing here lately I am just happy as a clam!! love your writing and never tire of reading your posts. thanks for being a loyal visitor to my blogs. I don't know how you find the time!

Still, once it begins, there's no stopping that wonderful growth. Gotta love the promise of spring.

Beautiful collage Zuzana. Oh yes, Spring is in the air...

Hope spring hurrys up for you!

Hi Zuzana!
I have been out of the blog loop and eager to visit!

I SO welcome spring and all that it brings...even the rainy Sunday afternoon we are having! A cup of tea and the newspaper and I am a happy camper.

Ooooo, I love the new photo of you at the top of the blog. Lovely...

Your prose is pure poetry...and I feel I am watching the sunrise, and spring spread over the landscape with you...drinking a cup of tea in your garden! I love your writing...I'm so glad I met you! You are a treasure! BTW, my father was Polish...His parents born near Krakow...My uncle was Czech! I feel a kinship with you on so many levels! Love, Janine XO

nature is amazing, the beauty of it is astonishing and unstoppable!

Hello beautiful Zuzana. Thanks for stopping by this morning. I love your post today with the beautiful tree. It has rained all day Sunday and still raining the Monday morning. We do need this rain. I have so enjoyed spending the day just remembering the beautiful weekend we just had. I have some beautiful Iris too. Blessings
QMM

Tony, Brian, Kat, Joanne, Stevie, Kath, sprinkles, Alesa, LadyCat, The Bach, Kata, Gypsi, Holly, Eternally…, Doreen, Hilary, Blogaire, Donna, Jill, Janine, Jingle and QMM, thank you all for your very kind words on my collage and for sharing with me your own sentiments about the progress of spring in your part of the world.

I truly enjoy all your visits and your comments, always.
Xoxo
Zuzana

I love every wild flower except the dandelion!

April is indeed ending!! I didn't realize that until reading your entry! :-o time truly flies!
Seasons are a bit off. While summer should start on your side, it should be ending here, but they say - and it certainly feels like so - it will last until the end of May. A few more days of heat and sun, just as it seems you will have a few more days of Spring before summer enters seriously.
Dandelions are called here "diente de leon" = lion's tooth. I don't know why?
have a great day!