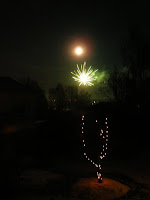 I can never get tired of looking at the moon. It mesmerizes me always and it leaves me feeling enchanted every time.
The moon is full thirteen times a year and there is something inevitably feminine about its cycle. Mysterious and enigmatic, so close, yet so out of reach, never the same.

I have described numerous times that I can see the silver disc out of the roof top window above my bed, drifting to sleep under its cool glow, when the nights are clear and the conditions right. I wish I could see it as often as thirteen times a year, but that is rarely the case. The Scandinavian night skies are often cloudy and the view of the moon is scarce.
Intriguingly enough, the last full moon of the year fell on New Years Night. As luck has it, that night was as beautiful, as during the last full Moon in the same month. Clear and bitterly cold, with snow on the ground and the skies absolutely pristine.
Everything seemed magical and fairytale like and the old year departed with an uncanny grace. And even more fascinating is the fact that there was a partial eclipse, that could be seen starting early in the evening and lasting about an hour. I am forever fascinated by these celestial events and the fact that they occur on the last night of the year adds obviously incredibly to the mystique of this natural satellite of the Earth.

The only regret I have at all times is a not having a better zoom on my camera, as the pictures here are nowhere near the incredible sights I had out of my windows last Thursday. 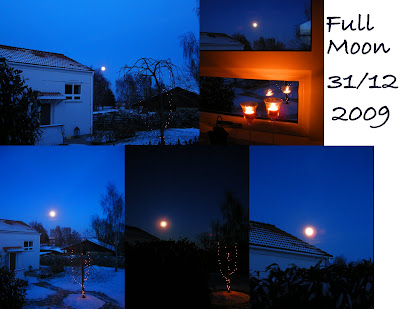 I'm the same. I never get tired of looking at the moon!

I love the moon and so does Jess! She stares at it through the window - I wonder what she can see with those amazing feline eyes? The moon is so fascinating and perhaps this full moon is a good omen for the year ahead...
Your photos have come out much better than my attempts!

I hope your January is being kind to you so far!

Have been moongazing with my son thursday and we came to the conclusion that the moon was the best of all the celebrations in the sky.

it never grows old to gaze into the heavens and see her looking back...

You MUST plan your trip to Southern California around the cycle of the full moon. You will NOT BELIEVE the beauty of that orb as it HANGS over the Pacific Ocean at about 5am. It is like a dream. Like a photo that you have seen a thousand times...it's reflection on the water like a dazzling glow of beauty.
I have taken dozens of photographs, but they never quite do it justice. Thank goodness I have a great memory.
And, 12 more times each year to take in its glory...

I think the pictures are beautiful. I love the moon, too!

The full moon on New Year's night was beautful. It almos looked like the sun was about to rise in the middle of the night. I love when the moon gives out that much light!! =) Great post!

The time of the full moon is when the sambhur deer would drop by at my farm.It makes me wonder why it chooses that special time.When morning comes I'll be first out to check any signs of its visitation..hooves print,trampeled over grasses or broken branches of dillenia shrubs.The full moon thus highlight to me we are not alone in leaving our prints on the universe. Thanks for sharing the beauty of Scandanavian nights.

Not good enough? These pictures are amazing!!! My mom woke up on the 1st of January, thinking I had my nightlight on, only to realize it was the full moon and its powerful light coming through the windows. It was amazing, wasn't it? and so big! The newspaper said a full moon on New Year's only happened every 19 years, so we were lucky.

We were overcast new year's eve, which was a shame as I wanted to see it, and apparently it was blue! So good to see you back Zuzana, I hope you had a lovely break my friend. xoxo

I think I'm a sun girl :) but I might have to start paying more attention to her sister! xo

Me, too...I love moon gazing, and I love the analogy that you make with the moon and femininity..That is so true. That must be part of it's mystique, it's allure amd attraction. It has a definte magnetism and hypnotic quality.

saw the full moon here on new years eve. Pretty! We live in a beautiful world.

Ah the Moon…that luminous globe that stabilizes our planet, controls our seas, inspires both lovers and poets alike, and causes those with lycanthrope tendencies to howl at it, what would we do without her?
-
Once while riding across a wide open prairie, where there were no artificial lights, I shut my headlight and rode the highway with just her illumination.

I watched this same moon with wonder and delight! So beautiful!

Your pictures are beautiful! I am a moon lover, too. Drawn to it like the tide. We had the amazing full moon visible and left the blinds open to bask in it on New Year's Eve

I keep telling HH we need to put a skylight in the bedroom upstairs for just that reason. I think you pictures are great. We also had that Blue Moon in Kentucky. No need for lights outside that week. thanks for your visits, dear one.
qMM

I adore the moon as well and never tire of staring at her endlessly. There are many stories about the moon in different cultures.

The pictures you have taken are so lovely. A strange thought: I felt like grabbing the moon and holding it in the palm of my hand.

Yes, the moon is truly mesmerizing when it is full. We sat outside watching in the new year (along with the spectacular fireworks a lot of our neighbors treated us to!)and the moon was amazing, with a large white halo, and a smaller, rainbow hued one. Heralding in a year full of promise?

Happy New Year, my friend. Love the pictures of your Scandie moon! :)
It rained here all night on New Years Eve...so, no moon that night..of course, it didn't matter because I was partying away in a nice warm house. :D

Over the weekend I did get to see it, but was away and left my camera at home. :( I'm with you on wanting a better lens for my camera...

Lovely! I love it when the moon seems big and close so that you can see the face of the man-in-the-moon.

Hundreds and thousands of poems have been born inspired by the beauty and mystery of the moon. With the advancement of science a lot of mystery has disappeared by the beauty still remains and couples are going to get moonstruck for generations to come!
Nice picture and you for sure have a window with a view.....

I feel the same way about the moon. Nice photos. I can just imagine.

full moon is fascinating, and looks beautiful. but on the other hand I always have funny feelings about it-like sth strange could happen only because of full monn, plus I dont sleep very well then, can really explain that...

I saw you at Cielo's and thought I'd stop by and take a little time to enjoy your lovely blog. Happy New Year. Diana

You know, I went to my parents house for dinner on New Years Day and drove home in the dark. I knew that there was a full moon as my father mentioned it. But I didn't really pay much attention to it on my way back home. I really regret that.

Your pictures are beautiful!!! I love that blue light. It doesn't ever get like that where I live.

A lovely description! And lucky you to be able to see the moon from your bedroom window. I miss the Scandinavian sky even though it was often cloudy, it is incredibly beautiful.

Zuzana I have just met you and would like to share this very appropriate award to you as someone I have just met. It will be up tomorrow 1/6/10. Do what you wish with it but I like the idea. Blessings
QMM

Zuzana, Greetings from snowy NH, USA...to add to the wonder and mystery...isn't it awesome that we were all witnessing the same brilliant blue moon on the same evening around the world...we always do, but still somehow, it was extra magical being New Years Eve!

Wonderful! Wonderful! The moon holds that mystery doesn't it!??

My camera limits me terribly...I keep looking at new ones and looking and looking...hmmmm, someday I will buy one with more capabilities!

this is superr cool; im obsessed with astronomy- its so gorgeous and inspiring
xx
and gorgeouss blogg; will definitely be back visiting soon!

They look great to me. Your photos are always beautiful and full of mystery. They depict what you write so beautifully. Always.

I've tried taking pictures of the moon with my camera...I get nothing. Your pictures are beautiful.

I'll always remember one summer when our family was camping in a state park. We were set up near the lake. There was a huge harvest moon that night. I laid awake long after everyone else was asleep looking at the moon.

I have loved your words and images, Zuzana. May this new year be chock full of joy and adventure for you.

I too love the moon,...and I love the way that you capture moments with your words.

I love the moon photos-fabulous.

Yesterday as I worked in my garden I glanced up in the western sky and saw the moon-on-the-wane. Sometimes I forget to look for it in the daylight, but it was a treat.

One evening my little granddaughter asked who was taking bites out of the big cookie.

As always, your comments are always appreciated and are an inspiration to me to every day,