Halo Around The Moon. 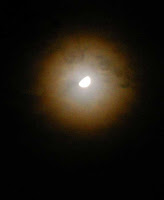 The moon is visible again in the Northern night sky. Our last few evenings have been clear enough to reveal the cool glow of an almost full silver disc.

On Sunday night the sight was obstructed by a few clouds and the weather conditions produced a halo around the moon. This bright effect most likely occurs when high thin clouds containing millions of tiny ice crystals cover much of the sky. Each ice crystal acts like a miniature lens, diffracting the moon light. Science aside, the image appeared unusual and enchanting.

Yesterday night the skies were pristine and as I was returning home from work, I simply had to pause and gaze at the jet black sky, which was filled with millions of stars. This view will never cease to mesmerize me, as it is at night that it truly becomes very obvious to me that our planet floats suspended in space. The evening was bitterly cold and the Orion Belt clearly visible in my view.

I only wish I had a professional camera that could take magnificent pictures of the night sky. All I have to settle for are a few precious imprints in my memory and one really bad shot of the moon. 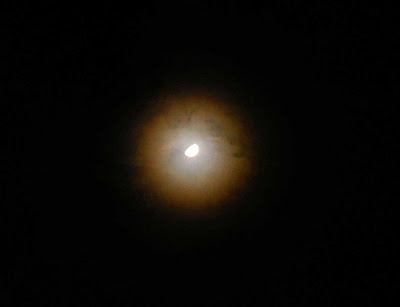 Thats a wonderful photo! I never get tired of admiring the moon in all her stages.

Hi Zuzana
What a great halo round the moon. Orion is my favourite constellation. I love the myths and legends of the constellations. Often, I look for the Orion Nebula - it's quite plainly visible on a clear night. I'd love to have a look at it through a pair of binoculars or a telescope to see it in its misty loveliness!
Another lovely post from you.
Dan
-x-

If you can forgive me for being a little skeptical, I don't think that's a true halo although it is a beautiful picture.

As you said, a halo is caused by ice crystals but the halo isn't caused by diffraction, it's caused by refraction and gives a very precise angular size of almost 22 degrees. The pictures you have show a ring that's too small for refraction and instead you're seeing reflection from the high clouds, so it's not a true halo.

Sorry to bring the bad news, but the images are beautiful nevertheless! In fact you're almost seeing a moonbow there, that's why it's a little redder towards the outer edge of the ring. That indicates water vapour rather than ice. A halo is almost pure white.

Hehe, no problem Tom, it is important to get the science bit right and you being an astronomer should know.;)) So thank you.;) xo

This picture is perfect to me. It tells the story of the world of the moon.

The sun is shining brightly!!!!

You take such glorious pictures. May I ask you what type camera you use and do you use special lenses in order to take such beautiful celestial pictures? Have a wonderful day! CAthy

beautiful pics. i love looking at the moon...

WOW! Zuzana, you have re-decorated and it is wonderful! All spruced up for a new year!

Your posts on the moon always entertain. It is so beautiful! I too, often wish I had a better quality camera for more exquisite photography...maybe someday!!

Have a great day!
XOXO

Nice to know the scientific "facts" behind the halo around the moon phenomenae!
There was both a halo around the moon AND it was a half moon, like an orange slice the other night(last Friday?)that caught my eye and imagination recently.
BTW, I think your night sky photos always turn out quite well, but I know what you mean, as I am sure the real thing was so much more impressive to the naked eye and photos don't always quite capture that.

I got up to take Lucas to the bathroom last night, and thought someone had left a light on, as there was the bright light coming through the window. It was the moon!, and it was very beautiful and pristine. There was not a cloud in the sky, nor any sort of fog that would cover or ruin the lovely sight. It is amazing the moon, isn't it?...sometimes, very intriguing even.
have a lovely day!
*hugs*

Does the halo mean snow? That's what I've always thought. We're due some sort of weather here today... hope it's snow and not rain (did I just say that?!)... I'm tired of needing fins and a snorkel to take the dog for a walk :)

Wow, great photo! When I was young I was told that a ring around the moom meant rain was coming.

I so love looking at the moon!
Wonderful photos!
Thank you for sharing them, Zuzana!

Enjoy the day!
It's the most beautiful morning here and I have a day off, so I know I am going to really enjoy it!

It sure is beautiful regardless of the science behind it.. or in this case.. around it.

Moon again ... there are hundreds of poetry and songs written in Indian languages.
The poet sees the moon as a male and the halo as his lover.
As a child we used to listen to stories about the mountains in the moon.
Science is science but at times it is more fun to keep the science aside and be a child or a dreamer!
The picture has come very nice, considering that you have used a ametuer camera

Hi Zuzana,
I know that frustrated with my camera's limitations feeling well...but your photos really capture the halo of ice crystals perfectly...just lovely.

I think your shot is great dearest Zuzana!

But sometimes I also wish to have a professional camera, so I can take really great shots...lol, not to mention sometimes I wish I would be a great photographer as well!

Hope you having a great week my dear, cheers: Evi

Ps: Love your new layout and the picture about you on the sidebar :-)

What a great halo round the moon! It's an excellent picture so please don't think otherwise!

I was out and about on Sunday night and as ususal, didn't pay the least bit of attention to the moon. I really should so I don't miss beauty such as this!

Whatever it is called around the moon, it looks very intriguing and mysterious!
I like your new blog look (I wonder if it's more "work" oriented for you -since you work in a lab, everything needs to be organized and precise!).
I'm trying to haunt down the three people from whom I lost a comment today -if you're one of the ones, I apologize!)

I have missed so much! Love the new look of your blog. Love the photo of you! xoxo

And this post is great. You sure did take a great photo of the moon.

I was just catching up on your posts there; love the unforgettable moments post, all the more special for the description of that unplanned moment. I have a few. :O)

If I could, I'd do astronomy at university. I'm fascinated and Orion's belt is right there, just outside my bedroom window at this time of year.

Your photograph is pretty amazing, my sky pics never turn out.

I hope you are well, my friend, I love the new blog look and the gorgeous photo of you! xx

stunning image! I am a star gazer from way back also. stars, clouds, etc. have a great week!!

Lovely one. the Orion belt is the only one visible form any part of the world.

Diane asked if a halo indicates snow on the way. Just a reminder that Zuzana's picture isn't of a moon halo, but a halo often does indicate bad weather approaching. An approaching area of low pressure will often have high thin cirrus clouds preceding it and these are the types of clouds you need to form a halo (very high and cold so the clouds themselves are formed of ice crystals). It's not 100% accurate but it is a pretty good indication rain or snow is on the way.

Well, I LOVE the photo of the moon within the halo. It is magical and evokes lots of feelings.

I also love seeing the moon when it has a moonbow (night rainbow) in all its glory surrounding it.

Kath, Dan, Tom, Elizabeth, Cathy, Brian, Jill, kristy, Phillip, Kirsty, Tina, Claudia, Diane, Mitr, Being Me (welcome!), Margie, Hilary, Sumandebray, Laura, Evi, sprinkles, jeannette, Shelly, Helen, Doreen, Susan and Sharon – thank you all for your lovely words about my photography and for sharing your own affection for the moon.

As always, I appreciate your kind visits more than I can adequately express.

Zuzana your pics are lovely. Tom is right, and he knows his stuff for sure. However there is another way to perceive this mood of the moon. A "moon dog" (or paraselene) refering to a halo around the moon has always seemed to me to allow for a looser interpretation of proper halo, or just misty glow. It allows for the poet's discretion to be moved withersoever. I also find a flexible magic with his more intense cousins, the "parhelion" or "sun dogs".

Richard, you are an artist at heart and you view your surroundings in an appealing way, which is reflected in your art. Thank you for this beautiful comment and your visit.
xo
Zuzana