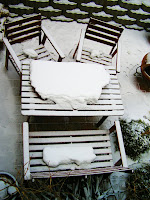 The winters in southern Scandinavia are in contrary to popular belief quiet temperate. They feel cold, due to the damp, windy conditions, but on average, the temperatures will stay around 5C during the day and around freezing, or just below freezing in the night. The Gulf Stream keeps our weather very stable, thus our winters are mild and our summers cool. Not my kind of weather at all, if you ask me.

However, as with every rule, there are exceptions. Every few years we do get large amount of snowfall, particularly in January and February, making our winters feel long and at times endless. December snow is very rare and the fact that our Christmas 2009 was white is highly unusual and happens on average every fifteen years. Since that very snow fall in the middle of December last year we have experienced record breaking weather conditions. In fact the temperatures have remained below freezing, way below freezing almost constantly for six weeks. The few hours of plus degrees did not manage to thaw very much of the very first snow away and in periods, we continue to receive fresh addition, such as yesterday night. Thus everywhere I look I see fresh snow, but also old snow. The remains of December snow are clearly visible. My garden furniture, my flower pots and my lounge chair are all covered by snow that is by now six weeks old.

As I walk around my terrace, gazing at the old layers, which still look as white and pristine as when they fell, I realized that I am - in an interesting and unique way - revisiting the past. Minutes, days and weeks, all captured in frozen precipitation we call snow... 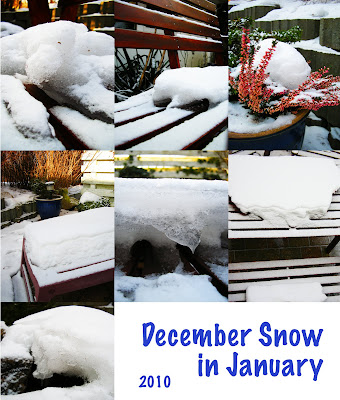 Got up this morning to 6 inches of snow!!!We were only supposed to get 1-2 inches!!!!Really beautiful and totally unexpected. Have the grand kids here and now we'll have sledding this afternoon!!! YEAH!!!!! Cathy

so it seems you are getting our snow this year. I am very glad to share that with you. :-)

have a wonderful weekend!!

We are having extremely cold temperatures but no snow to speak of...I would like a little snow to make the temperatures a little more bearable or at the very least pretty.

You have an intersting background.
I am in Maine and it was o zero degree's this morning. Awful
cold year.

It's been bitter cold here on and off this winter. Right now on. But we've had sufficient warm days throughout to melt our last significant snowfall which was early December. We have only a recent dusting right now.. and it's not about to melt anytime soon.

Love your collage. As always you capture your moments in time so well.

What an interesting thought...that in looking at 6 week old snow you are also revisiting the past...just like the air we breath is also the air the everyone who has gone before us has also breathed. The past, the present, and even the future...encapsulated in old snow. Deep thought.

I'm a Spring and Fall girl, myself. Winter's not so bad, it's the COLD that get's me!

I like your picture in the sidebar, Protege. Tell me, are you fluent in Danish?

Great collage! It has been cold here in Indiana the past week. However, cabin fever has not set in yet. I'm still keeping my mind preoccupied and scheduling events for LadyCat and I to look forward to this winter season. I like your thoughts about new snow and old snow.. great post! :) The Bach

Zuzana,
You have such a wonderful attitude and a unique way of looking at things. You always make me think. I feel the cold just looking at those pictures.
Kat

We got some snow last night too. Hopefully it will be gone in a day or two.

Your snow photos are very nice.

You know what, next week more snow to come. The boys are already thinking the snow will last til June. LOL

Time frozen in ice and snow - an interesting thought - the idea of a pristine winter landscape is one that captures the imagination.

Its extremely cold here this weekend with severe frosts but no snow in my neck of the woods (yet!)

Stay warm and cosy with Batcat!

I am sooooooooooooooo glad I don't live there!!! There is just no way I could handle six week of unmelted snow only to get a bunch more piled on top of it!

You have such a unique way of looking at things. I would never have thought that I was looking at the past when I looked at that snow. I'd have just looked at it with great annoyance and irritation, wishing it would go away as soon as possible. It is very pretty though!

Thank you for the kind message you left on my blog. I love that your verification word was "fight"! LOL I didn't even realize I had word verifications.

Boy we are looking at it now. 4 inches and still coming down. Oh well we are safe and warm, and everything looks pure and clean.
QMM

Hi Zuzana
It's suuny and warm here today!
But I have to admit I do love the snow but don't like to be snowed in and that has happened a few times since I've lived in Colorado.

I loved your collage of the snow!

Stay warm and have a wonderful weekend!

Zuzana~ Love the changes you made to your blog....very nice! Love your white house on the hill...:)

It is sooo cold here 15* not counting the frigid wind chill. Thank God the sun is shining!

Hope you are staying in near a warm fire and enjoying some hot chocolate.
Calli xoxo

Hello.
How Is the weather today?
introduces readers to various types of weather that occur during each season.
The text discusses typical activities and clothing for each type of weather.
Supportive illustrations accompany the text. You can find out here....
Bye

I live in South Carolina, and we've had the coldest winter since we moved here 13 years ago. Brrrr. I hope you're staying warm!

We also got a lots of snow in Hungary Juhuuu! We don't have garden,sad because I love playing in the snow and sit out in summer time...happy because I don't need to "work" with the snow

I am glad to be back online and visiting your blog again Zuzana (I never realized how utterly important a computer is in my life until I had to go without it).
It's amazing that since my last visit the snow is still with you in Denmark. Ours is now a memory, but it's still freezing cold and I will not be surprized if it returns soon.
Batcat must be really confused!
Keep warm Zuzana and have a nice week.

Nice to see the snow. I never get to see it in my part of the world..

Vazhachal Forest - A Picture Album
Getting formal on Business meets

Cathy, Doreen, Jill, Yvonne (welcome!), Hilary, Stevie, Kat, The Bach, Kat, Sumandebray, Donna, Elizabeth, Jeanne, sprinkles, QMM, Margie, Calli, Debbie, Kata, Blogaire and Mitr, thank you so much for your always lovely words in regards to my photography. I hope those of you who got new snow recently are still enjoying it. I guess winter is this year out of the ordinary all across the world.

Thank you all - as always - for your kind visits.

sorry so late in getting around...my world is snow...about 14 inches of it. roads are still nasty and i have no net at the house. but escaped...only to find more snow here. lol. hope you are having a great weekend!

Lovely! I got out in fresh snow today with snowshoes, two kids, and two dogs. It was wonderful.

There's a place on one of our commercial streets where the snowplows pile up snow all winter. It creates a small mountain at least ten or twelve feet high. That pile stays there aallll winter.

We know it's almost spring when that old, dirty snow is finally gone.

Brian, Claudia and sallymandy, thank you for stopping by and for sharing your stories about old snow, lots of snow or lack of it.;) Your lovely comments warm my heart.;) xo