The God Of The Doorway. 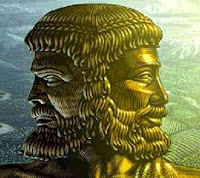 So here we are, still recovering from our New Years celebrations and trying to remember (and to keep) our resolutions, as we enter the first month of a new year. And a new decade. And if you are like me, you might sense a void, or a feeling of emptiness, as January is in a certain way an anticlimax to the month of December, which passed too quickly with all the joy and lights of the Christmas Holidays.

I have to admit that I dislike January. This poor month most likely doesn't deserve it, but it holds very little of my affection. It is one of the longest months of the year. Not in the amount of days, but in the sense that it feels endless.
Named after Janus, the Roman God of the Gates or Doorways, often depicted with two faces, one gazing backward and one forward, it signifies a simultaneous end and a new beginning.

I never make any resolutions and I dislike any kind of endings. Therefore New Years Eve leaves me usually with a sting of melancholy. Still, I have decided to try to see things differently this time. After all, the promise of a new beginning and a fresh start is one of the most intriguing parts of life. The sense of expectations, the idea of new experiences in the coming twelve months that are to be filled with marvel, joy, and moments of happiness, as well as occasional pain or sorrow - to keep our reality in balance. A plethora of events that makes every year special and exciting, like a brilliant pearl in a precious necklace that is life.

As I stand in the doorway between the new and the old, in the midst of the cold and very dark, never ending winter - just like the God Janus, looking back with sweet melancholy at what was, I am also looking forward with excitement to what is to be.
Posted by Zuzana at Monday, January 04, 2010

My personal year starts on April 1st. A much more suitable time to make resolutions, I feel.

I like the idea of new beginnings January brings.I love to fill clean pages on a tablet with ideas, lists, goals. Then the time just thinking about these things while I clean up and put away the clutter of Christmas celebrations leaves me with a home bare of nick knacks for awhile. Space to move about and think some more. Pretty soon the year goes rushing by, collecting even more clutter to fill my home and life and brain and add to more memories. Happy New Year to you~

looking back and looking forward...as long as we continue to move forward, not letting our view draw up back. it is january...

I find March to be that long month. By then we're mentally putting winter behind us but it's still all too present physically.

"There will come a time when you think everything is finished. That will be the beginning."
I am TERRIBLE at endings...probably because I have not had very much practice with them...
I am LEARNING to see each of them as a new beginning...so much more positive and encouraging to me!
Happy NEW year, NEW decade...NEW day.

Great post! January makes me a little sad, too. Especially, when the radio or televesion starts playing/showing recaps of last year or the decade.

I am trying to think positive this January and also look at it as a new beginning. =) I hope this new year brings a lot good to everyone and the world. I also hope that in this decade the war will soon be over.

'A brilliant pearl in a precious necklace that is life' - well said and highlighted my friend.Looking forward to an intensely creative year ahead and I shall take January leisurely to start with.

Profound post my dear friend. I was a Registered Nurse. I finished my career in the home health arena. I didn't consider science the right industry for that, but there was no medical category listed. When I graduated from high school I thought I wanted to be a Med Tech, ended up being an x-ray tech, spent 25 years there, then went to nursing school. I worked til I was 70. I nice to run into you.
Blessings
QMM

How very interesting! He is rather hansome isn't he? I am eager to make my first trip to my caravan, which is usually in March, so that feels like the start of the new year for us. Kath in England

I agree, it's pointless, any time is good for resolutions, Im nearly sure thats most of 1st January resolutions will die around 2nd week of Jan:P

Resolutions are nothing more than unrealistic complexities that we add to our already complicated lives.

A decade ago we worried about Y2K. 10 years have passed and we’re still here.

I think your 'daily' BLOG best exemplifies that we should live life in the moment.

Normally I have similar feelings about January. This year I am so excited. I maybe lucky and January will pass on the high bliss I am on.

Have a lovely evening.

I always look forward to January because I can put the past year in the past. Like 2009 was mostly not good from my birthday weekend on forward. This month feels kind of like a new beginning so that I can leave all that behind.

I do understand you not liking January though. I'm not good with change wish things could always remain the same.

Sometimes I make resolutions for my birthday. It's always for something personal that I want to change about myself like learning to be happy with what I have and not always wanting more. I didn't make any for my last birthday though.

Fortunately, and even when it becomes chilly and windy here, it never gets entirely white as it does in other wintery countries. Therefore, there is always something green and alive in every month. As it is a new month, and a new year, January always brings a feeling of clean and fresh start to my days. I always find myself cleaning here and there, decluttering drawers, starting new projects...very active month actually, and never long enough to do all I have planned, both at work (too much to do there!) and personally.
Have a great start of the first week, of the first month of the new year!
*hugs*

I'm looking forward to everything positive this year has to offer...

Suzana, dear friend, this (January) too will pass!
How things are going in my own life, I started a few years back holding to the Jewish calender of times (although I am not Jewish), because I found that changes in my life kept taking place in Sept/Oct. not in January.

One of the things you're bringing up that January is in the dead of winter, yes -it's a time and place of hibernation, not a time of setting new goals -it's too early for that. In nature, Spring tells us that it's the time for new things.

When you're interested in mythology and related things, remember that Constantinopel long ago changed the beginning and end of the calender years!!

I kind of like January – it’s cold so we stay inside and read all the books received at Christmas while eating the fancy chocolate received as gift also. It is a slow month, a time to meditate and enjoy being calm.

Welcome back, dear friend! I hope your holidays were lovely and that your January turns out to be not as long and much more light-filled than you anticipate! xo

My reality is out of balance right now, but I know it will even out. Thanks for a wonderful post! V.

Ah, yes...looking backward AND forward...interesting to see what the future holds. I share your feelings about January. Sort of a let down after the holidays and for us right now the coldest weather we've seen this year. Hope it does not mean a brutul February, too. We in the South here are wimps about the weather, as you probably know from your stay here! c.

"A plethora of events that makes every year special and exciting, like a brilliant pearl in a precious necklace that is life."

I used to feel this way about January, but 2010 is very different for me. I know that many things in my life that I felt would always be a constant have been fading for several years, and they've nearly vanished. Yet, with the promise of a new year, I know that what ushered in on Jan 1 will be a life changing year. I'm embracing joy, promise, and welcoming all things positive in my life for the rest of my days...

Feb. for me has always been my least favorite month, but I feel that even Feb will bring unexpected joy.

Cosmo, KathyB, Brian, Hilary, Julie, Mel, Denise, Shelly, Mahmud, QMM, Kath, Maja, Scribe816, Donna, Elizabeth, sprinkles, Claudia, Stevie, jeannette, Vagabonde, Diane, V, C and Rebecca - thank you all so much for sharing with me your own feelings about the beginning of this New Year and about the month January itself.

I found it very stimulating to read about your sentiments when it comes to New Years resolutions and your expectations when it comes to a fresh start.
Even though some of you expressed some reservations in regards to what is in store, including life altering changes, I hope this year is - eventually - a good one for all of us.

Thank you as always for your visits and comments, they all mean so much.

A very personal and tender post right from your heart and that is what makes this post to connect to all of us.

I tend to dislike February as it is another month of cold and darkness and further away from the cheery lights of December.

Susan and Lynne, thank you for stopping by and for your kind words,
xo