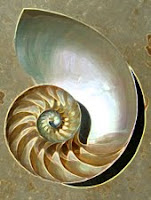 Also known as the Divine Proportion, The Golden Mean, or Golden Section, is a number that plays a major role in architecture, art, the way we perceive beauty and is found freely in the natural designs of various life forms.
It is basically viewed as an irrational mathematical constant and equals approximately 1.6180339887. It is often labeled Phi.

The number itself was determined by a mathematical calculation of a sequence of numbers, called the Fibonacci sequence.
Leonardo Fibonacci was born around AD 1170 and was an Italian mathematician, considered by some as the most talented mathematician of the Middle Ages.

As with anything mysthical and unusual, I am utterly intrigued by the Golden Ratio. Still, even though I have researched the subject in depth I feel I am not an expert yet to adequately explain the mathematics and the theory behind the ratio. This can be much better achieved by reading the numerous sites online dedicated to this enchanted number, such as this one. Some list objects, designed by the Golden Mean and truly, when looking at them, they do appeal to be more beautiful and eastethic, when compared to those that are not designed with the ratio in mind. 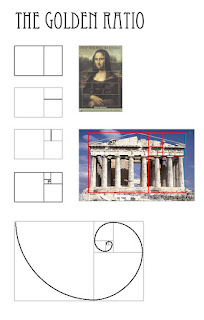 Both Leonardo Da Vinci and Sandro Botticelli created paintings that seem to follow the law of the Divine Proportion. Today, many artists and designers are very aware of it's existence and use it avidly in their work. The principles of the sequence can also be found in other areas, not just art and architecture. The Golden Mean is obvious in music, photography, interior design, graphic design and even in nature.
Some examples are: Da Vinci's Mona Lisa and The Last Supper (art), the Greek Parthenon and Egyptian Pyramids (architecture), the design of a Nautilus Shell (nature) and in the masterpieces of numerous composers such as Bartók, Debussy, Schubert, Bach and Satie.

I found particularly this animation very helpful when understanding how the formula is used in praxis and the clip below examins the Golden Ratio even more in depth.

You amaze me each time around. It was a very interesting post to read with background information that even I, as a non-scientist, can understand it.

Thank you so much. Have a great day.

it really is intriguing. i read a book on this about 2 years ago. fascinating...

I remember the 'Da Vinci Code.' It had a lot to say on this.

Heavier posts by the day eh?

Proved there is a creator and designer to everything.

Zuzana ~ I love the way you explain all of this stuff...even I can understand it! :)

Congratulations on your POTD award. This is very interesting post. Full of great information as the others said we can understand. Great Job.
QMM

Sort of a mysterious conspiracy from the beyond!! :-o Never EVER new any of this, mainly because of the path of my career and work. When I chose career way back in high school, I turned left, when it was at right when all of this was going to be taught for those that chose differently. I'm so intrigued!!! I want to learn more!
Thank you for always coming with the best topics Zuzana!
hugs

Nice Post. Yes mathematics is very interesting once you do not have to write exams anymore!
Liked the post

That is very interesting. I have heard of it before but did not realize it was used in music too. Your new layout looks great.
Kat

i always learn so much when i visit you.

I was just reading about this in a photography composition book. Fasinating!

Fascinating! I had never heard of this. Even cereal box shapes are influenced...wow!

I had a class called the Theory of Mathematics where we wrote about this. It was a class so perfect for us Art History majors and one that I can't believe that I did so well in, seeing that I am horrible at mathematics...

What an incredible post...I love that your blog is so enlightening...I always learn something new when I come here.

This is what keeps me coming back, I always learn so much from you!

I never realized how much it affected - music, art, cereal boxes, etc. Amazing!

I love visiting here as you always have the most interesting posts!
This one is wonderful and I really enjoyed it!
Thank you Zuzana and I hope you have had a great day!

I'm just waiting for the snow as it is forecasted.
We have not had much lately so I'm looking forward to some.

I see someone has taken on a new look for their BLOG. I guess it was time to shake things up.
-
You are an enigma. One posting has something artistic and the next is scientific. It amazes me how you intertwine the two. You actually make learning fun. I see by the other comments that I am not alone.
-
My dear you have a future in writing and teaching. There is a definite gift here which I think time will enhance.

Post Script; I clarified my 1 minute of fame in my last posting. Thank you for bringing it to my attention.

Wonderful post. Intriguing topic. You know so much about so many things. And you share. Thanks for that.

I've always found this idea so interesting...it is order in chaos...

Hi Zuzana,
What an interesting subject to post about. I really enjoyed reading it and I never heard of the "Golden Mean" before.

Elizabeth, Brian, Susan, Ocean Girl, Betsy, QMM, Claudia, Sumandebray, Kat_RN, Kamana, Zuzu, LadyCat, Rebecca, sprinkles, Margie, Scribe816, Hilary, Stacey and Sandy – I am delighted to hear that you enjoyed this post, whether this was a completely new subject to you or whether you recognized it. I find this mathematical constant, its appeal to the human eye and its design in nature extremely intriguing.

Thank you all for your lovely comments and kind visits.

Very interesting, Zuzana, and even inspiring! Gives me ideas. :-)

Great post- I always enjoy your blog when I visit. I enjoyed this one in particular and went on to sacred geometry which I found to be very interesting also. thanks so much for the introduction to both the golden mean and sacred geometry.

Amiable post and this fill someone in on helped me alot in my college assignement. Thank you for your information.

I've always been intrigued with the Golden Ratio. Thanks for posting about this!

Genial brief and this mail helped me alot in my college assignement. Thank you seeking your information.

Keera, young-eclectic..., sallymandy and anonymous visitors, I am happy you found this post interesting and /or helpful.;) Thank you all for stopping by.;) xo