Flashback Friday: "I Promised Myself". 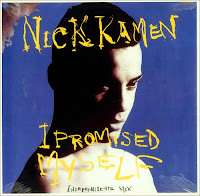 Nick Kamen's face became known from one of the many Levi's commercials that did run on television in the 80's. Those sultry ads featuring good looking men with their jeans.

This one was no exception. A handsome man stripping down in a 1950s style public laundromat, in order to stone-wash his blue jeans, while he waits clad only in his boxer shorts. Apparently, this dramatically increased the popularity of this undergarment and this ad was selected for The 100 Greatest TV Ads of all time in 2000.

However, Nick Kamen was more than a pretty face and did enjoy a brief singing carrier in the 80's. I did like his music, but to me he was always just a face from that jeans ad.
Until 1990, that is. In this year he released his his self-penned song "I Promised Myself". I think that compilation and the video that followed had everything that enticed my young romantic mind. The images were so simple, yet the young man standing there with his guitar appeared to be singing directly to me, looking at me with his enigmatic green eyes, telling me "...I will wait for you...". Needles to say I listened to the tape with this song until the tape broke.

Today I have grown out of some of my naivete, but a certain magic of the compilation has not diminished. Even though I by now consider the video to be somewhat aged and the thrill I used to feel is gone, I still relish in its aesthetics, its simplicity and in the timeless appeal of the lyrics and the harmonies.

Yes,pretty face :) I like to listen old music...just fly me back to my memories...makes me think..

Have a great weekend my friend!
How is the weather in Denmark?
Here it's really cold.

I have to go now ,because I promised myself....hehe the music is finished :(

Oh! Sugarplum Zuzana. That used to happen to me as well. Especially when 'Wise men say . . ." plays, I just go moony and loony.

The post seemed to take me on a journey to a distant romantic getaway.

Oh the joy of looking at nicely shaped bodies. Uhmm. The add is great.
Thank you for reminding me of this ......

Have a great weekend without too much snow I hope. Since last night we got about 20 cm fresh snow and it is still SNOWING. ARGHH!!!!

Hi Zuzana
I have to be honest, I don't remember this song, so thanks for sharing. I only remember Each Time You Break My Heart.
The rhythm in the background sounds like Respect by Erasure.
I still much prefer remembering him washing his Levis, though I was probably too young to appreciate the full effect!
Best wishes
Dan
-x-

these post make me feel like i am reading chapters of my past that i have never read before. lol. thats music for you...

That was a great TV ad and must have sold a whole bunch of blue jeans!

Zuzana, I often wonder how you come up with such interesting posts and you do it every day!
That is just amazing but I love it so just keep on!

Thank you for this one!
Took we back!
I love nostalagia!

Have a great weekend!
I'm off on a ski trip with hubby today, just a day trip but it will be awesome!
I'm so excited!

And thank you my kind friend for all the wonderful comments you leave on my posts!
They are so appreciated!

What a happy song! Now that is the rhythm one expects to hear when a love promise is made, isn't it? ;-)
Very 90's indeed, and though I never heard of it, it is exactly the kind of rhythmic tunes I truly love. I was moving my head while listening to it! :-D
Thanks for sharing!
have a great Friday! Friday at last!!
*hugs*

Nice song .... I do not remember listening to this song before.Thanks for sharing.
Have a great weekend

fabulous post, dahlin!!! loved this ad then and love it now!!! now to go find some of those jeans!!!

oh, you mentioned something about a song?

Very nice song and sweet music in my ears. Have a great weekend!

I love it when a television ad is captivating versus boring too! :)

Hope your Friday is off to a fabulous start. We're expecting snow!? Ice!? :/

Wonderful song. I've never heard of this song before but I love it. The 1990's is my kind of song too. Good vibes for the weekend.Thanks for sharing.

I have never heard him before. But whatever I saw and heard today I definitely liked.

I've heard of Nick Kamen but wasn't familiar with his music so thanks for sharing this.

He is quite cute.

LOL! That jeans ad is the only thing that comes to mind when I hear Nick Kamen, too. I think that's when I became fascinated with button flies. ;-)

"I Promised Myself" is a catchy tune. Hadn't realized it was his.

Well beautiful girl, I am too old to recognize that ad or that song,but sure did enjoy it tonight. It is snowing and we are having hot chocolate and listening to the music. Thanks for sharing.
QMM

Thank you for always finding the time to stop by, your visits mean the world to me.;)

Just the kind of music video that used to send me into fits, too, Zuzana. I had not seen this before, but I can imagine my twenty-something self also loving it. I love your musical flashbacks.

sallymandy, so glad you share my affection for this kind of sweet music.;))
xo