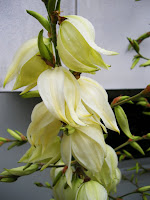 The previous owners of my house were definitely not tending much to the terrace. When I took it over, it was in need of attention. There were no flowers and the few plants around, including the hedge, were not thriving.

With that said though, I have often wondered whether they had an expert in a form of a landscape designer, or a gardener to design the patio and suggest the plants to grow there, as they are very unusual and seem to have been perhaps expensive.

One of them is a very exotic looking thing. I have been told that this is a common plant here in Denmark, but I have failed to identify it. It is a sturdy plant, with long, narrow leaves, I would say almost cactus like. I have seen it previously in Tuscany and it made me conclude that it needs very little water to survive. That made me view it as exotic, combining with the fact that it does look a lot like some sort of agave.

It is an evergreen and the most interesting feature of the plant must be the flowers. They shoot up slowly, as thin, long stems in mid June and then continue to grow exponentially to almost the height of two meters. Then they start branching out over a couple of weeks and the result is branches carrying big, creamy white, bell-like flowers.

Does anyone of you know the name of this exotic flower? (Please click images to enlarge.)

If you are ever in my area, will you please stop by? My garden is in need of much help...
Your green thumb would be a much appreciated help!
I love your yard!

You are a great gardener. Please come to ours for a while. Even in summer time!! Flowers regards!!

Great flower! By the looks of it, it seems that it could be a bulb flower? If so, it is probably why it blooms around July, when the sun is really strong (bulbs flower when it's hot and sunny), and need very little water. Does it sound like a possibility?

Love to read your flower posts Protege!! They are so...seasonal? and hence exciting to see them bloom, right? Because of our weather, we pretty much have flower and plants blooming year-round, so though really wonderful to see, they don't come as a complete surprise, do you know what I mean?

Keep the good work in the garden! and always keep us posted.

I'm not sure what this plant is called but it's certainly a stunner! Could it be some kind of gladioli I wonder?
Have a lovely evening.
x

The color is gorgeous...and it seems to love to frame your bench seat perfectly!

Wish I could help, but it's not one I'm familiar with.

Julie, Philip, Claudia (what a thorough research!;), Jeanne, Betsy and David (thank you for stopping by) - thank you everyone for your kind comments and suggestions on what this plant of mine could be - I will update you if I ever find out.;))

I think I can tell what this palnt is--a Yucca plant. How do I know? Because when we moved to our house, there was this same plant near our driveway and, to be honest-it scared me a little and I find it not a pleasant looking plant(those spikes! and the tall Dr. Suess flowers don't seem natural to me). So, after a year there, I told my husband to dig it up. He tried, but he could never uproot it entirely and it comes back every year. I have grown to accept this Yucca plant will remain and kind of admire it's tenacity.

I must say I have never seen that plant during my travels to Denmark. But it is beautiful.

bull's eye Gal Friday!! It is not at all what I had thought, so Protege, just ignore my comment ;-D

Came back as I was extremely curious about the name of the plant. I have a couple of plants ad flowers that I have no idea what their names are, so it's always interesting to find out if there's been any luck in other cases.

It reminds me of a yucca as well. Are the leaves thick and spiny along the edges?

I'm intrigued! What plant is it?

=Tina,
so right you were! It is a yucca for sure - I looked it up by doing an image search and it is identical. I agree with all you sentiments about it; the fact that it is a bit scary and weird looking and I too wanted to get rid of it originally, but now I kind of like it as well.;))
Thank you so much.;)
xo

=Jacki,
it is planted often in peoples yard and outside gardening stores.;))

=Claus,
yes, Tina got it right, however I appreciate all your effort and research as well.;) xoxo

=stevie and gaelikaa,
the leaves are long and thin, narrow and pointy, very sharp at the end.:)) It is indeed a Yucca Flaccida, as stated by Gal Friday above.;))
Thank you so much both.;)
xo

wow! yes, that flower looks very exotic. i haven't seen anything like that before. it's really beautiful! looks like expensive to me. :)

Protege, you really are gifted with green thumb. you know how to make your garden bloom, very healthy and green! :)

=Noelle,
Tina above solved the mystery; it is a yucca palm. I am still amazed that it can grow in Denmark.;)
Thank you for complimenting my gardening skills.;)