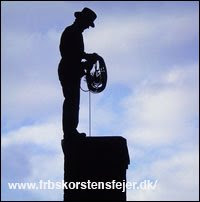 The other morning I had a very curious encounter. I had my fireplace built last year and this was the first time the chimney sweeps came by to clean it, since it was constructed. I have had fireplaces before, especially while living in the US, but I never saw anyone cleaning them. As I guess the property managers took care of it while I was at work.
I think I was mostly amazed by the fact that chimney sweeps still do exist. This strikes me now as a bit ignorant on my part, as of course how else would the chimneys get cleaned? I remember seeing them as a child, as I remember reading the fairytale by H. Ch. Andersen, "The Shepherdess and The Chimney Sweep".
But I have no idea why I have never seen them since. Perhaps I never paid enough attention. They wear the same uniforms they have worn for ages, black with golden buttons, cap or hat on their head. And they still use - mostly- the same equipment they always have. They climb the roofs and use long brushes in chimneys and are all covered with ashes and sot in their faces. It was an amusing and pleasant encounter. Where I come from, the encounter with a chimney sweep is considered to be a lucky one. It is encouraged to touch the buttons of their uniform for luck. I almost did it, but then changed my mind, as they would most likely consider me a bit odd. But perhaps that would have made their encounter with me unforgettable as well.
Posted by Zuzana at Thursday, October 30, 2008

LOL... your chimney sweep might have felt he had an obligation to give your Irishman a run for his money. So, was he cute? Would I like him? ;)

Diane, they were two and not cute or handsome, sorry to disappoint.:)
One of them was young and shy, the other old and rough. But they were very well mannered though and admired my fireplace a great deal.:)

Chim-chiminy-chim-chiminy-chim-chim-charoo. Good luck will rub off if I shake 'ands with you. Or blow me a kiss and that's lucky too. Even if you didn't rub their buttons, did you shake their hands or did they blow you a kiss? Maybe you'll have good luck anyway! Hope so!

How wonderful that they wear the same uniforms... and that you have a fireplace! :)

Yes G, I do have a fireplace and I love it, having it built last year was the best thing I did.:)

Mel, I did shake their hands, so hopefully you are right - thank you for hoping for my good luck!:))

That's so cool. I too have never really given any thought to chimney sweeps so I would have been every bit as delighted. I'm glad you shook hands.

That's romantic. It really does have a fairy tale-esq feel to it. I am almost jelous...I never have a reason to use my fireplace, so I doubt if I will ever encounter a true chimney sweep, :)

LOL... Holly, I bet those chimney sweeps don't see their jobs as terribly romantic... nor do their wives, who are probably always cleaning soot off the furniture! ;)

Hilary, exactly, I never thought about that either, but it was in some way very cozy to have them around.:)
I am not familiar with that song, so Mel's got nothing on me.:)

Holly, yes, I follow what you mean about it being romantic, as I am incredibly romantically inclined myself.;)
Why don’t you use your fireplace? I know you have one; you posted a picture of it recently.

Diane, my Irishman just told me the song is from Mary Poppins, I might get on youtube and see if it will be in my head too.;)