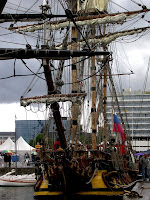 I live in a city with a large and busy port, which accommodates many container ships as well as passenger ships and in the summer months, large cruise ships. This principal port is located in the center of the city, as originally the first settlements were established along a small river delta. They slowly grew and expanded along the coast, to form a major city around its harbor. Archeological findings date it back some 1300 years into the times of the Vikings.
I love the harbor and I drive through it as often as I can find the time. I am always fascinated by the incredibly large container ships, that often anchor there, such as Emma Mærsk, the largest container ship ever built.
The cruise ships continuously use the port as a part of their itinerary. I pass the docks every day on my way to work and during the summer season, these large "resorts of the sea" arrive several times a month. At times I can not resist and have to stop to gaze at them in awe. Their size is incredible and overwhelming. Hundreds of meter long, with multiple decks and all the luxuries one can imagine. The most common are ships from P&O and Holland-America cruise lines. I often envy the passengers and the incredible adventure they get to experience.
A few years ago, Ooesterdam was anchored in the harbor during a large tall ship show. Sailing ships from all over the world gathered at the city port and it was possible to board them and get tours. It was an amazing sight, as there is so much romantic beauty in these old ship rigs. 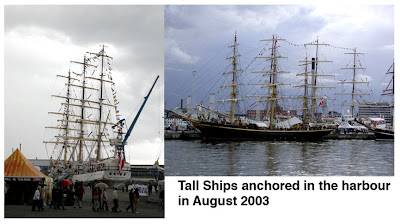 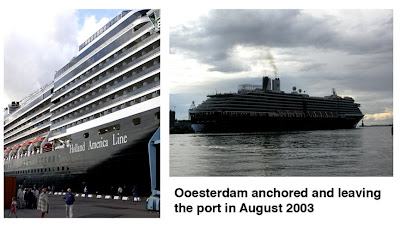 Hey, Ms. Z...going backward and reading some of your older posts this morning with my coffee. :-)
How OLD the history of your harbor, with evidence of Vikings there!
I love these kinds of old masted ships. We get them, too, across the bay in Newport for the Tall Ships Festivals--also the giant cruise ships from time to time. I think I might have been a sailor (or even just a fisherman) in a previous life because I love the sea and boats and would like to be on one of those ships whenever I see one.

Tina, thank you so much for leaving a comment here, on my old post; I think it is the only one that has never been commented on.;))

Yes, I love ships! I hate flying, but my dream would be to sail around the world. I guess perhaps in my next life.;)
Happy to find someone who share this sentiment.;)