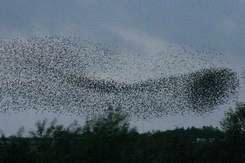 In spring and especially during the birds migration season in autumn, which is right now peaking in Scandinavia, a phenomenon called "Black Sun" can be experienced in south part of the Danish peninsula where I live. This term describes a flock of up to thousands of birds, particularly starlings, that lift into the skies simultaneously at sunset, before settling down for the night, thus temporarily "blacking" the sun. This assemble of birds might also perform the effervescent, but synchronized flight, when they feel threatened by the birds of prey. It is incredibly enthralling and intriguing, that such a vast quantity of birds can coordinate their flight and perform such beautiful acrobatics in the sky. Nature is astounding.
Posted by Zuzana at Thursday, October 16, 2008

I actually saw something similar to this in Charlotte... I don't remember the time of year but I know the sun was beginning to set. I was at a stoplight and these little birds were doing the most amazing sychronized flying over the intersection, swooping and turning, up and down. Everyone was completely enthralled and I know we sat through 2 green lights before the horns started honking. It was really amazing and I've never seen anything like it since.

Interesting Diane, I am sure this was a similar phenomenon. It is amazing that the birds can synchronize their flight in such a calculated way. I too find this incredibly fascinating.

Reading books about earlier t times in America, there are numerous references to the sky being filled with birds. I can recall times when I was young of seeing clouds of birds.

But now days, like bees, the birds are disappearing. Oh, they are here and there, but mostly what we see are handfuls of birds.

It is a sadness, not having swarms and crowds of birds.

Bill, I have heard about the problems with bees, it seems to be a global predicament.
I too remember that there used to be larger flocks of birds, particularly migrating ones, when I was a child. Luckily, the Scandinavian nature is despite everything still very pristine and the described acrobatic flights can be freely observed.

That would be so amazing to see (though not from directly below). ;) It's wonderful that you were able to capture and share it. Thanks for that.