Prague, the city of a hundred spires. 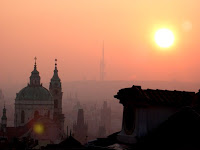 My father was born in Prague. Today, he and my mother again live there and the pictures here were taken on my visit to Prague in October last year.
I never lived in the city, but I did spend many of my childhood summers there with my grandparents. Every summer until the beginning of the 80's. I remember moments in time, fragments of experiences that still linger in my memory. Anyone who ever visited that city falls in love with it.

Positioned in the heart of Europe, it played important roles in its history. And history is what can be found on every street corner. Every building is an architectural treasure and behind every street name there is story to be told. Already as a child I was intrigued by "the city of a hundred spires", as it is called in the fables. I read with great fascination the tales of the city and took often long walks through the picturesque center with my grandparents, while they were pointing out to me all the places depicted in my favorite book. This was when Prague was dusty grey, some of its historical buildings in decay, with only a handful of tourists around. But at that time it held a particular magic that is since long gone, never to return. Historical places were easily accessible, one could walk undisturbed back into history, in an atmosphere of romantic melancholy in an almost "film noir" setting. To those familiar with the renewed Prague and its beautiful old town, which looks almost like a theater settings at times, the "Charles Bridge" comes to mind. A beautiful, pedestrian only bridge connecting the "Lesser Quater" with the "Old Town". The bridge is usually packed with tourist and street performers to the bursting point, almost at all times of the day, except for very early in the morning or very late at night. Although beautifully restored and an experience to cross, it is at times almost claustrophobic.

Well, I recall seeing a black and white photograph taken in the mid seventies. It was taken by my grandfather, as we were strolling across the bridge, me and my sister and my cousin, as children, on a Sunday afternoon. The striking part of this memory is the fact that we were the ONLY people on it. Such a solitary moment in this romantic city can most likely never ever come to pass again. 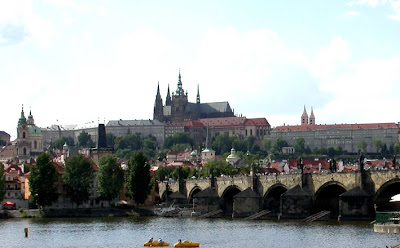 The Charles Bridge today.
Posted by Zuzana at Tuesday, October 21, 2008

What beautiful photos and a beautiful post! I've heard that about Prague as well, that everyone falls in love with the city, and I hope to find out for myself in the near future. We've talked about the feeling of 'rootlessness' and you know that, like you, I know it well, but if I had to be rootless, I'd like to be like you, with ties to so many lovely places! :)

Diane, thank you for such a lovely comment -I agree, I do feel fortunate to be able to travel to this historical and beautiful city often and to have ties with it still.
I will be happy to be your guide if you ever decide to visit Prague.;)

Such beautiful photos.. that top one is so dreamy. I always have this image that historical cities never change but I suppose they just don't change as much as many do.. there's always that. Thanks for the wonderful post.

Thank you Hilary for your kind comment. I know from your blog that you are a talented photographer, so I feel very flattered you like my photo's.
Yes, in the Eastern Europe there has been great changes in the past 20 years, some for the better, some for the worse.
But that is the fact of life and changes are inevitable.

I have always wanted to visit Prague. I still plan to someday. You have a gift with words. I enjoy reading your writing.

The mind games post was sure fun to muse over.

Holly, thank you for your compliments, I am pleased to hear that you enjoy my writing.;)
I do hope you get the chance to travel to Prague one day.

My kind of city, for sure.

I am happy to hear that you like Prague David.;)
Thank you for stopping by.

Prague...I would love to see it. Whenever I read about it, it seemed such a cosmopolitan city that you wanted to rush up and down the streets, cross the bridges, take it all in. Thank you for this close up view. Congratulations on Post of the day Mention!
Sandi

Thank you for stopping by Sandi, if you can, please do visit that city, you will love it.
And thank you for bringing to my attention the nomination, I feel very honoured.