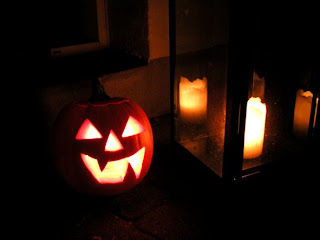 I love Halloween. I first became aware of this tradition when I moved to the US in the 90's.
At that time the festivity of Halloween was non-existent in Scandinavia. Growing up in Sweden, however, we did celebrate All Saint's Day on the first Sunday in November, a common religious observance which exists even in the Slavic part of Europe, where I was born. It is considered a somewhat serious and solemn day, with the tradition to light candles and visit the graves of deceased relatives.

While living in North Carolina, I became very fond of the Halloween celebration and all the traditions that it included, such as pumpkin carving, the trick-or-treating, eating pumpkin pie and watching all the horror movie marathons on the television. I honestly missed the holiday greatly when I relocated to Denmark 9 years ago.

Interestingly enough though, in recent years, this Celtic festival has spread around Europe and has become immensely popular even here in Denmark. Particularly the carving and displaying of jack-o'-lanterns. Seemingly they fit so well in the dark, cold season this far up north.
I carved my very own one this past Saturday and, as seen on the picture, it is ready to scare of anything sinister that might be approaching my house tonight.

My pumpkin looks like your pumpkin's retarded cousin. And yeah, I know 'retarded' isn't terribly PC, but I call it like I see it! ;)

LOL Diane, I love this comment.:))
I am so not PC, so this fits very well with me.
Have a Happy Halloween.:)

Protege, that was fascinating. I really enjoy learning all of these tid bits of Trivia that you have to offer. I am soo glad that you get to celebrate this Holiday. (How tragic it would be if you couldn't. ;)

Where I live it is so warm most of the year that fireplaces are more for show then for use. :(

With your lovely pumpking and a few frightening flicks, you're all set! Have a happy Halloween!!

Happy Halloween! I stopped carving jack-o'-lanterns around 10 years ago because they were sooo messy! I cheat by having an electric one sitting on my front porch. Now if only I can figure out how to get the electricity working on my front porch, everything would just fall into place (says the girl with the pumpkin necklace and the cat ear headband on).

Donna, I tried to made it scary, but happy.:)I hope you have a nice Halloween.:)

Holly, I really do love Halloween and am happy it has reached Denmark.;)
To bad you do not get a chance to use your fireplace. But I envy you the heat, I love warm and sunny climate. Scandinavia is way to cold for me, most of the time.
And Diane is very funny and writes a great blog.:)

Belle, happy Halloween to you too! And thank you for stopping by and for your kind comment.

LOL Mel, you are so funny! Have you tried to use extension cord? Or calling an electrician.:) Or I will be happy to carve a pumpkin for you next year and send it Federal Express.:))
Happy Halloween Mel:)