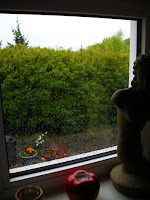 Today is a cloudy and rainy day, perfect for just curling up in front of the television (that now comes with 250 channels) and relax with some reality escapes. Although I am still a bit at loss with what actually is being shown where, I managed to catch a wonderful and most of all colourful movie called "The Darjeeling Limited".

Not expecting much, I was pleasantly surprised; it struck me as one of those rare independent movies, although it had a famous cast, among others Adrien Brody and Owen Wilson. The film basically captures - what is suppose to be - a spiritual journey through India, which is undertaken by three brothers, but one that very quickly derails. I would label it as a comedy-drama and I think it is one of these movies that one should see more than once.

Below is an update of my wonderful clematis, which thrives and grows well. Today's rain is a welcome relief for not just my plants but the rest of nature as well. 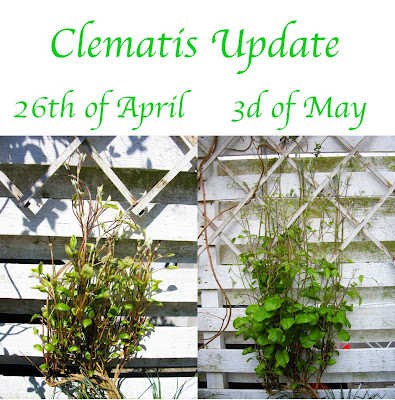 Oh they're coming along nicely. Frank has Clematis at his place and I'm not seeing any sign of them just yet. Are they supposed to be cut back? He never does anything with them year after year and yet they grow rich and beautiful by mid summer.

Confirmation #100 that you and I are trans-Atlantic soul sisters! I just watched Darjeeling Limited for the second time, having seen it in the theatre when it was released a couple of years ago. BRILLIANT! I think it is the BEST metaphor of "letting go of baggage" that I have ever seen. And I need that reminder all the time!
Your garden is blooming with beauty!!
Enjoy the rest of your rainy weekend and your 250 channels!! :)

I'm glad that you're keeping us updated with your flowers. I enjoy these very much. Clematis is so lovely.

Oh, and I meant to comment on the movie, too. Getting a personal recommendation is the best. I've written this down and will look for it. Thank you.

Finally, two more things. My eyes latched onto your "life is an adventure" saying at the top of your blog again this morning, and I also wrote that down on a sticky note and put it on my printer. I've been getting too serious and anxious about problems. I love your feeling here.

I learned your real name on Gal Friday's blog the other day...so pretty...and guess what? I decided to type it into Google with "wants" like I did the other day with my own. (Remember how you said you might not find anything?) Turns out you do want few things after all, dear. Who knew you could just find out what they are on Google. :)

Sometimes, a rainy day is a good excuse to slow down and just watch a movie during the day, isn't it?
I had heard of that movie and now that you have given it the Protege "thumbs up", I'll keep it in mind for when I rent another movie.

Your clematis is so much farther along than mine, but..guess what?! Mine is thriving after all--the little nubs finally are becoming stems, although still tiny compared to previous years.(remember I was telling you I had thought mine had died?)

Funny - my post was about the rain, too! The clematis is looking good!!!

It rained here all day, too (think it still is, actually), but (of course), I spent a couple of hours tramping around in it with my boy :).

I've never heard of the movie but I shall look it up... sounds good!

Hope your weekend was lovely... xo

I'm trying to be patient. I'll wait to see the clematis flower. Now that's an excellent way to get me hanging on to your blog.

=Hilary,
there is no real need to cut any clematis back for it to grow, at least that is what I have heard. The reason why it is recommend to cut it back is to make it flower more and all along the plant, not just on top. Also, not all clematis plants are suppose to be cut back; my neighbor has one and shes never does anything with it; yet it blooms wonderfully each year.;)
I would love to see picture of Franks; what colour is t?
Hope your weekend was great.;)xo

=Julie,
how great that you are familiar with this movie.;))
Yes, it was very refreshing and different, hence I would love to see it again.;)
Hope you had a wonderful Sunday.;)

=sallymandy,
your comment made me laugh and that is so nice - to laugh on a Monday morning!;))
First of all, I am happy that the short quote made you feel good. It has almost been my mantra since childhood, when I wrote it down. I have always felt blessed with the fact that I am even allowed to be here and every single day, no matter how difficult or dark it might be, is an incredible gift. I find not knowing what is just around corer an incredible adventure;)
In regards to the google and my name; you are so right; but only 3 pages came up and I definitely did not approve of the one that said I need some spanking! LOL
Hope you have had a good weekend, thank you for this absolutely great comment.;)xo

=Tina,
you are so right, I was actually very happy it rained yesterday. The nature needed it and it was somehow relaxing to be all curled up on a sofa watching TV. As you say, there was no guilt that I was not outside.;)
I am so happy to hear your clematis is coming along, I am sure it will be gorgeous. What colour are the flowers?
Hope you had a great Sunday.;) xo

=Hazel,
sometimes it is nice with rainy Sundays, right? Thank you for stopping by, hope your Sunday was great despite the rain.;))

=Diane,
being out in the rain with your dog must be extremely lots of fun, you get to play around in the rain like a kid.;))
Likewise, hope your weekend was great dear friend.;) xo

=Mahmud,
am so glad you are going to be hanging around here, I love when you come and visit, And I know as you love plants that you enjoy watching them grow.;)
Hope you had a great weekend as well.;)

I don't think I have any images of the full plant(s) but here's a post from last summer which included one of the blossoms after a rainfall. They bloom all season long with profuse flowers. :)

Rainy Sundays are such a gift.... to curl up on the couch with a book or movie as the rain refreshes the earth... ahhhhh.

We are having your weather here today, Z, and on a day when outdoor fayres abound too!

How lovely to be able to languish on the sofa with a film, and I shall very much watch out for this one - I love Owen Wilson in his less mainstream movies, and Adrien Brody is ever wonderful! Blessings to you for a fabulous Monday, dear friend!

=Fhina,
the movie was lovely and as the nature needed water, I was happy to spend a day inside.;)
Hope your Monday was great as well, dear friend.;)) xo

=Hilary,
I saw the clematis - great picture; I have one of those too, it has beautiful red-purple flowers. Mine grows less well than the blue clematis, but it still becomes gorgeous.;)

=Beverlydru,
yes I think we all need those days when we do nothing but relax; my Sundays are those kind of days.;))

That clematis gets better by the day!
I think Owen Wilson wrote that movie...and I think I have seen the trailer, but not the movie though. If I come across it, I will.

=Claus,
yes the clematis is growing very fast.;)
The movie was really nice; very interesting in many ways, I can recommend it.;)

My clematis has small, fragrant white flowers that bloom in early September.
I would like to get another clematis plant-with more of the larger, colorful types of flowers(like the one you have) that bloom earlier in the season, too.

=Tina,
I am not so familiar with those; I think they are the ones called late blooming or fall blooming clematis. Mine do not have any fragrance and they bloom in July - August. The purple-blue one that I am posting about is called "Clematis Jackmanii". I also have one with dark red flowers called "Clematis Rose Cardinal".;)
I think though yours should be trimmed also each spring, maybe a bit later than mine, perhaps in March.
Eventually, the trimming is not necessary; it only promotes flowering as an untrimmed clematis will flower less for each year and eventually stop flowering all together.;)