Season Of The Rainbows. 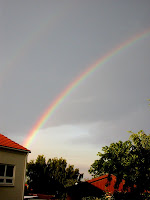 We are all familiar with that wonderful magical phenomenon that occurs during a summer rain. I love rainbows. Already as a child I found the colourful arch incredibly enchanted. I used to watch it emerge behind the sun drenched drops of rain, while it intensified on the canvas of the dark sky, only to slowly disappear into the air, as if it never existed at all.

Nowhere are there more rainbows than here in Denmark. I see them all the time in spring and summer, in the early mornings or late in the afternoons, almost always complete, like divine bows, so proximate, yet so beyond reach. 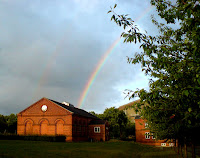 I am not surprised that these vibrant creations of nature have mesmerized mankind, giving rise to tales and stories of mystery and magic in fables and mythology.
However, the magic of the arch is nothing more than a refraction of light when it passes through a drop of water, causing the white light to separate into seven distinct colours; red, orange, yellow, green, blue, indigo and violet.

Science aside, I still like to believe that some conjuring is indeed taking place - how could it not in creating such a magnificent piece of art.
My favorite still has to be the notion of the leprechaun and the secret hiding place for his pot of gold at the end of the rainbow, as so well depicted in the movie musical, "Finian's Rainbow", which I recall fondly from my childhood.

Today, I still love to watch (and listen to) the so very romantic duet between Don Franck and Petula Clark; "Old Devil Moon".
They don't make music like this anymore.

I've always been a "Rainbow Connection" kind of gal. :)

Just lovely! Interesting that you have so many rainbow there in Denmark! We had one last month and it was the first in several years that I had seen. They are mesmerizing and mystical in a way. You are right.. the legends are fun, especially the pot of gold at the end!

I adore rainbows. They sing of hope and promises kept. We had a shimmering double rainbow at our home last evening. Then this post. I love it.

The best rainbow I've ever seen was a vibrant beauty which appeared to me when I went out for a walk during a sun shower. I had just learned that after 4 years of trying, that I was pregnant with my older son. It was one of those incredible moments that life gifts us with from time to time.

I love rainbows too, esp. the double ones, that seem like serendipity. I believe God put them there as a promise not to flood the entire earth again, as it says in the Bible, Science figuring out how He made the rainbows notwithstanding :) The prettiest one ever was just after my Dad's funeral - there was a magnificent, full one with one side seeming to rest on the ground, the other on the mountain range my Dad loved. I'd love to be in Denmark where you have so many of them!

Beautiful pictures of the rainbows. I love rainbows, too! One day last year after it rained I looked up to see one rainbow over another rainbow...it was so BEAUTIFUL!

When my kids see a rainbow they always say that their dog Navy (he died) is smiling down at them. I was tell them it sure is. ;-)

No matter how many times I see a rainbow, I'm still in awe of them :)

Everyone made these eloquent comments and then there is me...;);). For fear of ruining the mood I have to say that to this day the Seseme Street version of the song "Rainbow Connection" sung by Kermit the Frog is still one of my favorite songs of all times!!!

I love rainbows, such great shots...did you take them? I haven't seen rainbow such a long time now...I miss it. Wishing you a great weekend Zuzana and thanks so so much for your thoughtful comments. It means a lot to me. Much love: Evi (ps, your cat is so adorable :-)

=Betsy,
the multitude of rainbows here is most likely due to the very unstable weather with lots of showers.;)) I am wishing you more rainbow sightings.;))

=Beverlydru,
yes, we have the double ones here too.;) They are like a good omen or sign, I agree with you.;)) Thank you for your kind words.;)

=Hilary,
what a lovely, touching story. I often think about the effect nature has on us and how it can make our days. Thank you for this lovely comment. xo

=Rosezilla,
your lovely words just underline the fact that if we pay attention, nature has a way of giving us signs of comfort. Yes, we have many rainbows, that make up for the - quiet often - rainy summers.;))

=Shelly,
double rainbows are double magic.;)I love the way your kids think about them.;)) Thank you for this lovely comment.;)xo

=Hazel,
my sentiments exactly, I am sure they must inspire you in creating your jewelry.;) xo

=Rajesh,
thank you so much for your kind words and for taking your time to stop by.;)

=Holly,
you have not ruined anything.;)) I love this comment, it shows how young at heart you are! And who doesn't love Kermit.;)))
I always enjoy when you stop by dear friend, your words always make me smile.:)) xo

=Evi,
yes, both pictures are taken where I live and work.;))
Thank you for this lovely comment, I so appreciate your kind words and I truly enjoy my visits to your lovely place.;)
Wishing you likewise a wonderful weekend from me and Batcat.;))
xoxo

I am catching up on my reading and so glad I did! WHAT a charming song!
I SO enjoyed it that I think I will play it again before I go to work!
Thank you.
Oh, and have a lovely weekend. I am picturing you on your terrace with that glass of wine!!

=Jill,
I am so happy you enjoyed the clip. I find it to be such a wonderful melody and a movie-musical that is so overlooked.
Wishing you likewise a lovely weekend.;)

Z, I cannot observe a rainbow without wanting to find out its end - Just in case there may be a pot of gold there - It truly is still a very magical event, even when we do understand the science behind it all, non?!

I hope rainbows always grace your life, wherever it leads, sweetie! xo

=Fhina,
I so share your sentiment about the rainbow; thank you for that lovey wish.;)) xo