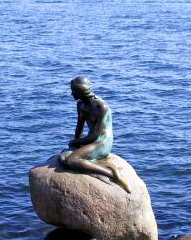 I am sure everyone is familiar with the famous Hans Christian Andersen fable about the little mermaid, that fell in love with a prince and chose to become human, with grave consequences. It has been made into many animated movies and is known by kids and adults all over the world.

H.C Andersen was a Danish poet and author, who had a wonderful gift in writing stories and fairytales, that were entertaining, but always with a little twist. He managed to expose the weakness and problems in mankind and in societies, which can be adequately transferred to any era in human history. Many of his fairytales are world renowned and cited and many additional stories have been spun on the same themes, such as "The Emperor's New Clothes" and "The Ugly Duckling".

Andersen is beloved by the Danes and a statue of the little mermaid is one of the main tourist attractions in Copenhagen. The statue was commissioned in 1909 by Carl Jacobsen, son of the founder of Carlsberg and created by the sculptor Edvard Eriksen. It was unveiled on 23 August 1913 and has ever since been sitting atop a big rock at the harbour, gazing with longing across the ocean.
I have seen the little mermaid only once almost thirty years ago. Strange but true; every time I make plans to go and see it again, they somehow fall through.
I was a child at that time and to me it appeared just like any statue, but many tourists claim to be surprised about how small it is in reality.

The statue of the mermaid has endured decades of vandalism, I am sorry to say. It has lost arms on numerous occasions, it has lost its head, have been painted pink and even been blown of its rock, most likely using dynamite. Interestingly, this defacement started first in the sixties and have only intensified in time.

The statue has been making headlines recently, as it will soon embark on a long travel following a somewhat controversial decision by the Copenhagen City Council, to move the statue to Shanghai for the duration of the Expo 2010.

I decided to post two different youtube clips of the attraction; the first one seem to be more professional, taken by the economic expert Jim Rogers and his wife, one one of their travels.

The other clip was simply so funny, I had to post it as well. It is taken, as far as I understand by two Erasmus exchange students. Judging by the language, they are Italian and judging from the clip, they are laughing with great irony at the terrible late March weather with sleet, cold wind and about 3C (around 37F). Surely, this is a very strange climate to anyone who is at home around the Mediterranean, where March is summer-like, to say the least. I do not speak Italian - I can catch a word or two about the weather - but to those who do; in a case some profane language is used, I deeply appologize.;)
Still, I love the sincere, unpretentious humour in the short clip, hope you will too.

I saw the mermaid years ago on a work trip when I worked for a language school (EF). The image has always stayed in my mind. I loved the way the waves lapped around her feet and it was one of the first sights I saw abroad that really holds happy memories for me.

its beautiful- i haven't seen it before

She looks so vulnerable (and yes, small) out there, on those small rocks!
I agree-that second video with the tourists standing out in that miserable weather is too funny(looks like March weather in New England).
I used to have a book of Andersen stories (Thumbelina was my personal favorite), and whenever my mother read me the Little Mermaid story she would tell me about how she saw the statue on her honeymoon in Copenhagen.

I saw the picture of the mermaid once. I wish I could remember where though. Wonderful stories by Anderson. This brings back memories.

The surprise that people express over how small it actually is, reminds me of the Mona Lisa. Not that I've ever seen it, but I keep hearing that it's far smaller than imagined. Another fine post, Z. :)

Someday I will see that statue in person! When I was about 10 years old I recall wanting to be a mermaid so badly that I thought I would just die if I didn't grow some fins. I have always loved the ocean and beaches. They speak to my soul!!

I would love to come and see it...but in its original resting place...I am of the opinion that it should STAY right where it is!! ;)

What a beautiful mermaid she is.

The second video is funny.....I wonder what they're saying!

Thanks for sharing this. I have seen the little mermaid and I like the movie alot...but never knew of the statue or the story behind it. ;-)

=Reasons To Be Cheerful...,
of course, I recall you have said in one of your comments that you have been in Denmark through an exchange program. She is positioned in a perfect spot and the changing of tide does make her mysterious and alluring.
Always glad when you stop by.;)

=Lisa,
if you are ever in Denmark, please make sure to pay her a visit.;)
Thank you for stopping by and for leaving a lovely comment.;))

=Tina,
how fantastic that your mother has been in Copenhagen on her honeymoon. I somehow like when people choose to go to cities to celebrate themselves as a couple instead of just a tropical paradise.;)
Even more sweet that she used to read from HC Andersen fairy tales for you; I think we all have at lest one such recollection.;)

=Michelle,
glad that I could bring back a childhood memory, it fits so well with the pictures you posted recently.;))

=Hilary,
very true. It was my thought exactly when I was in Louvre a few years back; luckily we hurried to the statue immediately upon our arrival and we caught her somehow amazingly completely deserted by spectators. To this day this makes no sense as already when we were leaving the painting, many tourist were arriving in herds. And when we returned to her numerous times while still in the museum later that day, the line was long at all times. Anyhow, she is much smaller that one would think, but I did not feel what most people feel, that she is insignificant. I think they get that feeling as she is behind a glass wall and difficult to see. I was mesmerized by the painting and couldn't take my eyes of it. It was a magical moment that I will never forget. She has an indescribable aura around her.;))

=Holly,
I thoroughly enjoyed your comment. I have never met anyone who wanted to grow fins! This is so amusing, I really love that.;) What an imagination you had as a child, simply wonderful.;)
I so hope too you will one day find the time to see the statue in reality and in that connection see me as well.;)

=Jill,
so right you are, I think they could have made a copy and lend that to China.;))
I am hoping you will get an opportunity to visit the little mermaid one day.;)

=Shelly,
glad you enjoyed the post.;)) I am always happy when people learn something new from my blog.;)
And thank you for that kind compliment.;)
xo

Z, I am just getting caught up with your tags and your blogs, and have so enjoyed Batcat's Birthday, learning more about you and your sweet neighbours, and these clips and the history of the little mermaid, which I have longed to see since I was a little girl and my teacher visited and took photographs to show us.

She also visited some house or garden with lots and lots of statues - Is that also Denmark, Z?

Anyway, I very much enjoyed today's visit and a catch up, and especially spending time with my surrogate cat, Batcat! It is a mark of the respect in which a cat is held that we call them not by their name but by a plethora of nick-names...

Whenever the vet called for mine by name, it always sounded so strange, and I wondered who he could be addressing!

Lovely to stop by, Z - It always is! My best wishes to you, my sweet, and good luck with planning your lovely vacation with your bold Irishman... xxooxx

Fhina,
thank you for this lovely comment; I think this is the 3d time I am trying to write a reply as bloger has been acting funny the whole morning.
No well, you know how much I always appreciate you stopping by, as I know you have a large fan base and many places to visit.
I am glad you enjoyed catching up on my posts, thank you for your always kind words.,)
xo