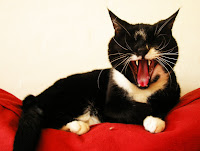 This is what Batcat looks like when his afternoon nap is brutally interrupted by someone (his staff). I managed to capture him in the middle of a yawn, which on the picture looks like a threatening roar.

I am not sure exactly on which day he was born, but it was in May 2003, which makes him six years old this month. Those years went by in a flash; actually, that year was a very significant one in my life and brought on many changes of a personal nature, among other things this was the year I found and bought my house. 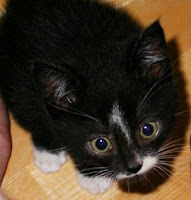 Batcat was born on a small farm in the northern part of the Jutland peninsula. I have posted a few pictures from his childhood previously. The farm was owned by one of our student’s family and when the farm cat produced a litter of four kittens, our female student did her best to persuade me to get one.
Relentlessly she kept sending me the cutest pictures of all the kittens until my heart gave in and I decided to get a cat. Not just to me, but even to a colleague of mine, who chose eventually to go for the only completely black kitten. (I seem to remember that the student never worked in science again after finishing her education, but became some sort of a sales person. Well, this did not surprise me a bit, actually.)

I knew I wanted a black and white cat and there were two tuxedo kittens in the litter. One was beautiful, his colouring close to perfect. For a while, I was pretty sure he would be the one. Until the day before we actually drove to get our kittens. Suddenly I knew I wanted that skinny little kitten with very long legs, that looked hilariously funny and that was nicked named “Harry Potter” by the student, as he had a funny white mark in his forehead.
Well, his name became Samson, as I have always liked cats’ names to contain an "s". He was called Samson or “Samso-loono” as he was a truly “loony” kitten, always full of life and energy.

However, since the handsome Irishman came into my life, Samson is not called Samson anymore. Almost immediately upon their first meeting, he stated that Samson looked like a feline Batman - "BatCat”. With his two pointy black ears, he looks like he is wearing a BatCat costume - a true cat superhero. So, from that moment on, he is only called Samson by the vet.

Batcat is my most beloved feline friend. Being an inside cat, he looks almost like a toy. His paws are snow-white and always clean, his pads are soft and smooth - his whiskers are long as they never get worn and his fur is always pristine, luscious and shiny.

As no other cats ever enter his territory, which is the house, he is very laid back and relaxed, as he has no need to feel anxious about protecting it at all times. This also means he stays away from hostile encounters with other cats and animals that can spread diseases. My large windows offer views of surrounding nature where he can watch birds and other animals through out the year, without hunting or killing them, as other cats do.

He is Batcat and he knows it.

I didn't want to sound too strange at the time(although, I am sure, often, what I try to say here comes out strange, anyway), but when you last showed Sams...er, Batcat in that purring video, I was entranced by his beautifully white mitten paws and wanted to kiss them! I am that way about kitty paws, though, and Batcat truly has such lovely ones.

What a lucky cat he is that he was chosen by you and gets to now rule the roost at your house. :-)

(BTW, my Jewel will turn six years old May 30th)

I love cats. We have one that my daughter named "Tigger" (he's orange and white) but when she moved out without him, my husband dubbed him "Chester". Cats seem flexible about their names and not much else.

That second kitten shot is absolutely adorable. The biggest reason I love cats are those cute kitten pics. No matter who you point the camera, the will always look so warm and fluffly and full of mischief.

Happy Birthday to Batcat!! Such beautiful kitten. Guatemalan people are more of the dog type...myself included, but I love all animals...well, maybe except those that can give one the creeps!

Happy birthday, bobcat! I love the "woken up" photo! :)

Happy Birthday Superhero kitty!! What a cute and sentimental post. He really is a very pretty cat. I should probably introduce you to my Cindy sometime. I am sure the two of them would hit it off just splendidly! ;);)

Oh, the video is so funny! He looks totally annoyed at you! I can see why you had a hard time choosing from that litter...they are all beautiful! That tiger striped one would have had to have been mine! ;) Happy birthday to your lovely feline! :)

I love black cats and wish I could save them all. I hate how so many people think they're evil.... au contraire, they are so sweet! :)

I love your name by the way, Z!

BATCAT! I love how you related his story to us.. and wow.. 2003 was 6 years ago? Still feels like yesterday! I love the last photo of batcat staring out the window. So peaceful and you kind of wonder what could be going on in his head at that very moment.. watching birds? perhaps plotting world domination? hmm.. hehe..

=Tina,
I so get that sentiment, I always stroke his paws, have done that since he was a kitten, kind of "massage" them and he loves it. Some cats do not want you to touch their paws, but he is an exception.;)
Always love when you stop by my dear a friend and your comments are NEVER strange.;)xo

=Beverlydru,
there is a cat named Tiger in my neighborhood.;) And you are right, cats do not listen to names much, more to the way we say them.;))

=Michelle,
Batcat thanks you. And yes, kittens are so cute; I am telling you, I was ready at that time to take them all home.;))

=Claus,
thank you so much; I love animals too, even lizards and snakes, but I am not too fond of insects. Particularly spiders and my house is full of them; yuck.;)

=Cairo,
ah, I love that nick name; bobcat! Perfect! Yes, isn't that photo just hilarious? Makes me laugh at all times, thanks for stopping by.;)

=Keera,
yes, that irregular spot on his forehead is very cute.
Batcat thanks you for your best wishes.;)

=Holly,
thank you so much; yes, Batcat would be very interested in meeting Cindy, and yes, I am sure they would get along.;)) There is one female kitty in the neighborhood and although he can not really scent her being inside, he still behaves differently once he sees her, than when male cats come around.;))

=Betsy,
glad you enjoyed the clip; yes, he sure was annoyed that i was disturbing his nap.;) The clip was taken shortly after the top "yawn" picture.
The tiger striped one was a little female kitty an you know, I was considering taking her too! But she was unfortunately spoken for, or it would have been a "Delilah".;))

=Jewels,
thank you so much and thanks for stopping by.;)

=Reasons To Be...,
thank you so much for the best wishes, Batcat is so very happy!;) xo

=Erika,
I agree, I think black cats are very interesting too.;)
Thank you for always finding the time to stop by.;) xo

=Valentine,
what a great comment! Yes, "plotting world domination" sounds about right.;)) Thank you so much for these words that made me smile.;)) xo

Batcat is adorable! I love him in the video.

Batcat is getting cuter and cuter every time I see him in your posts. His yawn photo is quite scary and funny! hehe and yes, he is the best and perfect companion for you, of course next to the Irishman. hehe :)

What a great tribute to a beautiful kitty. I remember choosing one of my cats (long gone now) because she was funny-looking, whereas the only other feline cat available was perfectly beautiful. I feared the goofy one would be overlooked. AND she grabbed me every time I passed her cage at the animal shelter. So I figured we chose each other. She was a PERFECT cat. Happy birthday to Batcat. :)

=Donna,
thank you, yes the clip is fun, he is a bit irritated at me, but he still can't help it; he has to play along.;))

=Noelle,
so right you are; when the Irishman is around, I am happy, as my world is complete.
Thank you for all the compliments, Batcat sends you a BIG hug.;))

=Hilary,
sometimes you simply feel that the animal wants to be with you - a connection that is made both ways. My mother and sister once almost came home with a parrot, as it kept nudging them and talking to them and showing off when they passed his cage in the pet store.
Eventually they left without him, but they could not get him out of their minds. Still today we all keep thinking about what would have happened if....;)))

I know it is an old post, but how could I resist? I see you know he is a tuxedo cat. A worthy companion for you. Thanks for sharing a little bit of him with the rest of us.
Kat