I love open fireplaces. There is something very cosy about a fire. Who doesn't remember fondly the camp fires from our childhood, which unified us and made us feel safe and happy in a company of friends or family.
I also love to sit in front of a fire in solitude, such as my fireplace at home. A few years before I actually had it built, I was able to enjoy a fire outside using my "Mexican Oven".

I obtained it in an unexpected way. One day, when I came home from work I saw a strange looking thing made of clay next to the garbage cans in the parking lot. It looked like some sort of an oven. Upon talking to my neighbors I realized that it was once a property of the temporary occupants of a house that is now being renovated next door, which they rented briefly from the current owners. When they moved, they left the clay object behind and gave it to one of my neighbors. Now it was though not wanted anymore and my neighbor was getting rid of it. "Do you want it?" his wife asked me when she saw the puzzled look on my face. "It is a clay oven, a Mexican oven and it would be a lovely addition to your terrace " she added. "Yes!" I exclaimed imaging immediately cosy summer evenings in front of a crackling fire. "Then just please take it", she said and this is how I became the owner of the "Mexican Oven".

At that point, I knew nothing about the origins of this lovely outside fireplace, which looked more like a piece of art than an oven. Upon a search on the net I quickly realized that this was a somewhat expensive piece of clay and most likely I would not have been able to afford buying one, should I have ever chosen to do so.

Correctly called "The Chimenea", this is what is written about its origins by the wikipedia; "Originally, all clay open fire garden heaters imported to the U.S. from Mexico were known as chimeneas. As the story goes, chimeneas originated hundreds if not thousands of years ago by Mexican tribesmen who developed the chimeneas as a means of providing heat for their family as well as a vessel for cooking and baking. The original chimenea was designed to keep the rain off the fire and the family warm using merely a couple of sticks".

I love this wonderful clay oven, which prolongs the precious Scandinavian summer days into wonderfully warm and cosy summer evenings. 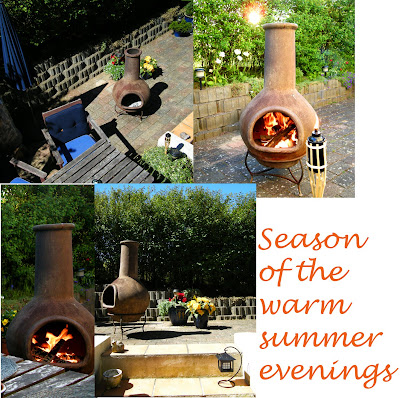 That is a wonderful clay oven and will keep you warm on winter days. Enjoy!

These were really popular when we lived in Nairobi. They're a great way to stay toasty on chilly evenings. :) Enjoy yours!!

I love it !
we have an inside fire but this would be beautiful on the back porch xx

Oh yes, I would love to have that, too! My dream is to get an outdoor brick oven so that I can cook pizzas and breads in it like a true Italian. My great-grandpa had built one for my great-grandma back in the 1930's, and my grandma has all kinds of stories about watching her mom use it.

I would so very much love to sit with you around that fire , chatting, under the bright Danish summer night sky--just from looking at the photos and knowing what an interesting soul you are.

A few people in the neighborhood have the ame kind of "chimenea", but I bet none of them have a story like yours behind it. What a great find...for free, too!
(we have a fire "bowl" in our back yard--not as pretty, but we use it often during the summer)

When I first saw the picture I said "Oh a Chimenea!", because I have one and that's how they are called here in Guatemala, where we also have those around. As I kept reading, I learned you have researched and learned how they are called in Spanish :-))
Looks lovely in your terrace!, aren't they nice? I have mine in a living room, though I must confess we have never lit it.
Great story how you came across your chimenea!

I was going to tell you we call them 'chimineas' :) I used to have one... now I have a wide copper bowl on a stand, with a mesh cover... it makes a big, gorgeous, open fire. I LOVE it and use it from spring into fall... and sometimes even in the winter!

You were so lucky with getting this beautiful piece! I totally love it. And I don´t know the better feeling than sitting infront of the fireplace in cold night :)

Oh, that is lovely, I so love a fire. We camped a lot when I was young, and we briefly had a fireplace in this house. And outside one would be better, it is usually too hot here to have a fire indoors. Enjoy your beautiful chimenea.

Somehow it puts me in mind of having a super-sized glass of wine.. ;)

What a lucky find!!! Your fireplaces (indoors and out) are so lovely.

Beautifu. I'd love to sit by a fire in your fireplace in the summer, with a blanket over my knees, and watch the sky get dark.

Thank you for your kind comments recently, Z! Love....

It really is very cool. I like pieces like this because they are also very much a piece of art. You truly have some treasures. I think that could actually fit in quite well at my place here in the desert.;);)

=Rajesh,
glad you like it too; I really enjoy my evenings in front of the fire.;))

=Cairo,
you lived in Nairobi? Is there anywhere you have not lived - amazing! And yes, an oven like this prolongs the season when we can sit outside.;))

=Lisa,
it sure would; hope you can find one to for those cosy summer evenings next season.;))

=Jacki,
to be able cook in an oven outside must be truly rewarding; the scent of food and a company of good friends or family around the fire; what better way to spend an evening is there, right? What a wonderful memory that you grandmother carries.;))

=Tina,
you always leave the kindest comments; i sure would love to spend an evening like that with you.;))
I also have a bowl like that, bu I could never manage to get the fire going in it; it only smoked out the neighborhood.:P:P

=Claus,
of course I knew you would know of this piece of a great fireplace.;)) I can completely understand that you have one inside; it is beautiful as an ornament, it truly is a piece of art.;)) Always appreciate your kind comments.;)

=Diane,
yes, there is nothing like an open fire, it is great outside and inside.;)) I guess it is the primal instinct in us knowing that fire means life.;))
I am sure your "bowl of fire" is wonderful!;)) xo

=Tereza,
agree with you completely; as a child when I spend my summers in the vicinity of Prague, we used to make campfires and grill sausages over it (opekali burty!)
I wonder if you ever did this?;) Always glad when you stop by.;) xo

=Rosezilla,
it is indeed such a wonderful memories that we have of objects from our childhood? I do understand that perhaps your tropical weather means no need for fireplace; I sure would not mind that heat and humidity.;))

=Hilary,
hehe, somewhat I knew you would say that!:):) LOL, this post was actually inspired by you, as you pointed out that huge "vine bottle" on my terrace.;)))
Always love your comments dear friend.;) xo

=Hazel,
thank you so much, I love them both and enjoy both equally much.;) xo

=sallymandy,
that is exactly the way to enjoy the white nights here; despite the chill that they bring, if there is a fire it allows for sitting outside long into the night.;))
And right back at you; thank you for your always kind words.;) xo

=Holly,
that is right, this would be a great oven to use in the hot desert, later in the year perhaps. I am not sure that I have ever told you that I spend a week in that beautiful part of the world and to this day remember it as one of the best weeks of my life; you live in a unique place.;)
Always appreciate your lovely comments dear friend.;) xo

I love chimeneas! It looks very nice in your terrace.

=Shelly,
thank you, I enjoy it almost through out the whole summer.;))
xo