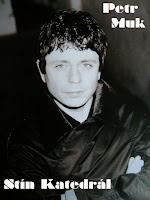 Today I am sharing with you a compilation of the Czech music scene. It is very different, and quiet possibly of very limited interest, as few (if any) of you can understand the words nor know the artist or the song.
Still, perhaps some of you can find the beauty in the haunting harmonies appealing.

I feel very much removed from the modern Czech music, as I have not grown up there and my teens were spend in the west. Thus my knowledge of the Czech or Slovak artists is very limited. All I recall are the performers of my parents generation, such as Karel Gott, whose music equals my childhood.

During the late 90' while living in North Carolina, I realized that multitude of radio stations, even European, were transmitting live online. Thus I found a popular Czech station and used to listen to it every day in the lab on my computer. In that period, I knew all the Czech hits. This was when I made a brief acquaintance with Peter Muk. Much later, when I visited Prague with my parents in the beginning of this decade, his songs were often played on the radio while we drove through the Czech country side. I became completely infatuated with his style. His compilations hold the very essence of what I look for in music. His lyrics are incredibly poetic and his sound has that airy, escapist feel to it that the romantic in me enjoys to dream myself away to.

My favorite compilation of his was not available for sharing, unfortunately, therefore I decided to share the one below. I am not completely sure, but I assume this is a live performance in 2007 or 2008 of his big hit from 1996, entitled "Stín Katedrál" , which translates something like "The Shadow of The Cathedrals". It comes across as a tribute to Karel Svoboda, who composed this song in the 70's, I believe.

Svoboda was a very talented composer of a multitude of absolutely magnificent compilations, throughout almost four decades. He wrote hit after hit for numerous Czech performers (including Karel Gott). It is quiet curios for me today to ponder the fact, that he originally studied in the medical field and was a close friend of my father, while they both attended the Charles University in Prague in the 60's.

Unfortunately and very sadly, Karel Svoboda died way before his time in the most tragic way - by taking his own life in 2007.

I hope you will enjoy this rare and absolutely stunning performance in a breathtaking setting, of one of the most hauntingly beautiful compilations I know...

Beautiful music, and romantic! The people in the audience almost look like models:) Thanks for sharing, Zuzanna.

Zuzanna!! You broaden my world so delightfully! I am so thankful I found your site and a new friend. I loved this music and would never have found it without your sharing...it reminds me of something I cannot quite pinpoint, but my mind will work on it and I'll let you know when it comes to me! Have a great day...of course mine is only beginning! C

I love your musical posts. I always get to hear about artists i probably never would have been exposed to otherwise. Thanks!

I want to dance...it's beautiful! I think really good music transcends the knowledge of the language...Tho I don't need to, I can almost understand what he is singing through the mood...
What a gorgeous setting too!

Very beautiful, soothing style! I can see why you love it!

As you know, I often pay more attention to music and rhythm that to lyrics. While listening to this song, I realized it could be because of the unknown languages a lot of songs are sung in! :-0 The soft way the song is sung, and the beautiful music can win you over, even if you don't know what exactly they are saying.
Thanks for sharing!

And I love your winter candles, too! XOXO

That was beautiful. Thanks for sharing something I wouldn't normally experience.

Music being what it is, the blending and bending of notes is often haunting or comical, lyrical and majestic...I think we hit it all here...thanks for sharing this with our world.
Sandi

this is the kind of music I like. The instrument supports the vocalist rather than competing with the voice
Great!

actually quite beautiful...i agree, i probably never would be exposed to much of the music you post...for that i appreciate you. have a great weekend!

Didn't understand the lyrics but I liked the song and video just the same. Thanks for sharing.

He has a nice voice to listen to although I don't understand one word of the song.
Thanks for sharing your musical memories.

A lovely piece...I so enjoyed hearing it...the music brought my little girls running...they find the singer handsome and were so intrigued with the different language!

Have a wonderful weekend!
XO
J

=jeannette,
thank you, so wonderful that you enjoyed and watched it long enough to see the audience as well.;)) xoxo

=C,
thank you for your very kind words, I am so glad you enjoyed it despite it being very foreign.;) xo

=Cairo,
so glad that you enjoy my Friday theme, thank you so much.;) xo

=Julie,
thank you - you are so right and I can identify with the sentiment, as I often love french songs even though I do not understand the words.;) xo

=Betsy,
thank you, glad you enjoyed a bit of Czech music.;)

=Claudia,
yes, I agree, sometimes the rhythm and the harmonies are what catches our attention initially, so the lyrics are secondary. Always happy to see you visit.;) xo

=Nessa,
thank you and you are welcome.;) xo

=Sandi,
thank you for your kind words and for finding the time to stop by.;) xo

=Sumandebray,
so very happy that you enjoyed this one, I am glad to hear it.;) Always happy to have you visiting.;)

=Brian,
I guess that is the beauty of blogs, one gets to see a different part of the world. Always happy when you stop by.;)

=sprinkles,
I am glad you liked this, thank you for your kind words and visits.;) xo

=Elizabeth,
I know you love music too, so happy to hear you enjoyed this.;) xo

=Jill,
ah, how great that your girls loved this.;) Yes, he is handsome and very charismatic.;) Hope your weekend is great.;) xo

I'll admit, as an Eastern European descendant (Bulgaria), I was curious to see if the language sounded in any way Slavic. It doesn't. But this is a dynamic performance that feels so Positive to me and very well produced! I'm happy you shared it!!!

=Michael,
it does sounds Slavic,;) But Bulgarian is only distantly related to Czech. Bulgarian is a South Slavic language, while Czech is West Slavic.;) I am happy you enjoyed the clip nevertheless.;)

That's beautiful. I want it on my iPod!!

=salymandy,
I am so happy you enjoyed this - a bit different - compilation.;)
xoxo