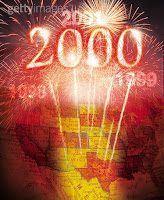 The first decade of the century is about to end. That notion is somewhat nostalgic to me. Perhaps as I am so aware of time and how fleeting it truly is, or maybe because I dislike when something reaches its end. No matter how good or bad it is.

The finale of this decade is somewhat poignant to me due to many reasons. One of them is that these are the fastest passing ten years of my life. I do not recall any other decade moving with such a a speed forward. Perhaps this is linked to the relativity of time, which makes each passing year feels shorter, as it encompasses a shorter span in our life.

It truly seems as it was only yesterday I celebrated the turn of the century with my parents, as we watched the fireworks in the sky and wondered, whether the whole city will turn black due to the scare of Y2K. But, nothing sinister took place and we happily toasted the new decade welcome.

These ten years that went in flash still fail to have a proper name. They were nicknamed "The Noughties" (derived from "nought", meaning zero), a term that has achieved common usage throughout the English speaking world, but failed to reach an universal usage. Still, officially called the 2000s, this decade did however see some major events taking place. Some happy, some sad, some terrifying and heart wrenching, some joyful and exciting. But in any case world changing.

Just to mention just a few of the trends, a BBC article sums up the decade using keywords, in all areas of life, including people and events. Here are a few examples, taken from the article:

For full text, please visit this site.
There are many other sites online listing key events of the decade all across the net. I guess everyone has their take on what was and was not important. I have my own personal events that define not just these last ten years, but they also define me as person. I am hoping that the next decade ahead of me holds just as much excitement.

what a cool list...will definitely visit the ful article. this decade has flown by. i can still remember where i was as we turned to 2000. it seems like only yesterday. wow. i had not thought like that until you brought it up...

I agree with you--these past ten years have been the fastest passing in my life! (funny, I only just began to see this term--"the naughties" this week--had never heard it before then)
Also--it seems so much happened in those ten years to alter our world, or maybe it just seems that way.

Zuzana:
"I dislike when something reaches its end. No matter how good or bad it is."

Quite true but every end paves way for a new beginning. Right? I wish lovelier and beautiful things for you in the forthcoming year.

Nice post to reflect, ponder and count the blessings.

I will check the link for sure.

Interesting post, Zuzana. I had not thought of the fact that a decade will have past already! A lot happens in 10 years, oh yes. Sadly the Y2K caused me employment problems, being a newly-trained Oracle developer just having lost my first IT job due to a big take-over.

The lists are a good reminder of a lot that has happened in the first ten years of this millennium. BTW have you thought of how many people FORGET where they've put their MEMORY stick! ;-)

Harry Potter!...thank you noughties! :-))
Indeed, it is ending, and I didn't even realize it until reading your entry! One gets too busy as one grows older, and time flies by. A lot of changes happened in this first ten years of 2000s indeed. Lots of growing up, and lots of bonding...overall, it has been a good decade. Actually, I'm glad 2009 is ending, as I truly dislike odd years, and am looking forward to 2010! I have a feeling it is going to be a good year.

The list really shows how much our lives have changed. We are going to keep evolving quicker and quicker but it is all good...

I am always surprised when people say that time goes by fast.
This has been the LONGEST 10 years that I can ever remember. The last five feeling like fifty.
Life goes by so very slowly for me. SO much has changed since New Years Eve 1999, I can't even begin to try to take that all in. It is a completely different world...for me anyway.
Life is long. Very very long. Has always been for me.
LOVE your list of things...
thanks, as always, for such a great way to start my day. You are so admired and appreciated!

You're not kidding that it flew by. I hope this one just slows down a tad.

This has been an incredibly, unbelievably eventful decade. It doesn't seem like it has gone fast at all. I can't believe all that has happened... wow, I might have to write it out just to ponder it. Hadn't thought about it all together until now.

Wow! just love the countdown thing at the bottom of your post!

Oy Vey! I just realised that I spelled it "Naughties" instead of "the Noughties"!!

Oh my, did it ever fly! Where does time go? I ask that question daily. I try not to live with regrets, always looking forward, but I always feel rather melancholy at New Years....

It was a decade with the greatest ups and downs in my life (globally speaking) -Y2K, Twin Towers, Economic Downturn.

I remember the Y2K thing too, I think I was the only person I know who wasn't in the least bit concerned about it.

Yes, this has most definately been a quick 10 years. I was thinking just the other day about how much has happened in my life since 2000, both good and bad.

I love lists like the ones you posted. It's fun to look back and be reminded of when things were introduced.

Great look back at all the trends and news of the decade. Each word brought back a memory, some good and others bad. Some events seem like they happened so long ago and for others it seems like it was just yesterday. My divorce was final exactly 10 years ago today...I hadn't even thought about that until this moment. A lot has changed for me in the past ten years.

It's been quite a decade, that's for sure. Amazing to actually see it in a list, and the reality of it all sets in.
Brenda

Ah, I like your Countdown icon...I wanna have like that 2. I just realize it's only 15 days from this year? Time is running ...I wish we can stop it NOW!

I so agree with you, these years are flying by. so funny about the Y2K, what a big scare for nothing.

hope the next ten slow down a bit!!

i've got notes going for a post on the noughties too. i think that term only caught on in the UK, it never really went to the US. it's just more british english to call a zero a nought, i think. too bad, as i really kinda like that term.

i think there's one more object that irreparably redefined: bush.

Brian, Tina, Susan, Keith, swenglishexpat, Claudia, Stacey, Julie, Hilary, Rosezilla, Mel, Rebecca, jeannette, sprinkles, stevie, Brenda, Kata, Doreen and julochka – I am happy to hear that you enjoyed this post and that you can relate to the sentiments in it, all recollecting the events in the past decade. Whether some of you feel those ten years went too fast or too slow.

Thank you all as always so much for stopping by and for all the lovely words above, they are all very much appreciated.

My post The Beginning Of The End was nominated for POTW by Hilary. Please click the image above to visit her lovely blog.