Flashback Friday: "Thinking About Your Love". 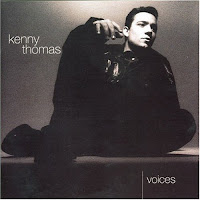 I have always thought that the best music was made in the 80's. Most likely this is not true, but because that is the decade when I was a teenager, my interest in music was very intense. Of course some of this popular sound carried into the next decade and therefore even the early 90's produced some of my favorite compilations.
Quiet early on realized that it was the soul and R&B (and later jazz) music styles that sounded the most appealing to me. Therefore when Kenny Thomas performed his "Thinking About Your Love", it immediately caught my attention. This single from his debut album "Voices" stayed on the UK chart for 13 weeks. I made sure I purchased that album later in the summer, or rather a tape. In fact it was one of the very few tapes that I took with me when I moved to the US in 1992 and therefore the music reminds me of my last year ever spend in Sweden.
"Thinking About Your Love" is actually a cover of a hit from 1985 made originally by Skipworth & Turner. Perhaps it does not contain particularly poignant lyrics, although I truly love the sentiment behind them. And perhaps it can be viewed as just another love song by many. However, I have always enjoyed the easy flow of the harmonies conveyed by an appealing voice. And today I enjoy the flow of memories that it brings back so easily...

Hard to say when the "best" music was, but I agree: a lot of really good music came out of that era. Thanks for sharing your picks with us. I have to confess that listening to music these days is not something that I do much. I appreciate someone "sifting" through the offerings and sharing their favorites. You have turned me on to a couple I have really enjoyed and would have otherwise missed! C

Lovely Flashback Friday this week. I must have missed this one; but I liked it all the same!

I have never heard this before or of him...I was more into the Barron Knights in the 80's...thanks for posting this, everyone needs to hear at least one new (to them) song every day of their lives.
Sandi

I will return and check this out when i can listen to it properly. There was some good music in the 80's and some wild fashion too!!

Great tune! To my ear, very early 90's. That shows you how late things came our way in pre-Internet days :-)
Have a great Friday!

Songs are full of memories.

great music .. got that touch .. the touch we liked in those growing years

Music and scents are often the keys to unlock our best memories. I listen to music from many eras and am always glad to find something new I enjoy. Glad you liked my blog too.
Kat

I always look forward to your choice of music for Flashback Friday Protege. The 80's and 90's always make me smile and I usually end up humming a Stock Aitken Waterman song from that era. I often go clubbing to a place called Mc Gowan's here in Dublin and weirdly the DJ starts off with the latest sounds and finishes up with 80' music. And of course everybody has a good time!
Have a nice weekend Zuzana, hope the weather in Denmark is better than here - wind and rain and cold...

its hard to really pinpoint which decade had the best sound, no? But Iam quite partial to the 60's and 90's.. but my granddad is trying to get some Frank Sinatra and Elvis into my system.. hard to say no, though. hehe..

Thanks for sharing. Had never heard of Kenny Thomas before today.

Late 80's music is my favorite, all those hair metal bands!

Love the 80's music!
Love this song!
Thank you so much for sharing and have a wonderful weekend!

Oh, I love Denmark too and so want to go back again.
I have 2 good friends there!
Have to get back to see them.

it does sound kind of jazzy and R&B. love the beat. I was a teen in the 70's. explosive time.

have a joyful and relaxing weekend!!

to tell you the truth i don't have any idea about the songs of lady gaga, rihanna, etc. The last pop star i knew about is britney spears. hihihi.

Always great to listen to your favourites.

Ahhh...the 80's...good times, good music. :-) Although, I did not know this song or the performer at all. But the sound of it reminds me of other songs from then.

=Cairo,
I am happy you liked this old hit.;) xo

=C,
absolutely delighted to hear that you enjoy some of the compilations.;) xo

=Brian,
glad you agree, likewise hope your weekend is great.;)

=Claudia,
I know what you mean, sometimes the music takes a while to travel across the continents.;) Likewise have a lovely weekend;) xo

=Sumandebray,
yes, the touch of youth.;)

Kat_RN,
You are absolutely correct; scents and sound can take us back in time so easily.;) xo

=Blogaire,
always enjoy when you stop by an the optimism in your comments. I am so delighted to know you enjoy this theme.;) Ah yes, it must be so very nostalgic when the clubs play the 80’s music.;) And we have the same weather as you, I am afraid…
xo

=Valentine,
you have such a broad knowledge in music, I am impressed.;) xo

=sprinkles,
yes, that was a decade of a certainly interesting rock and hair styles in rock as well.;)xo

=Margie,
so interesting to know you have friends here, it is a small world right.;) xo

=Doreen,
the 70’s produced some great compilations as well.;) xo

=Denise,
glad to hear that as I truly have a hard time finding any appeal in the new music.;) xo

=Lynne,
thank you, happy you enjoy this theme.;)xo

I think we all prefer the music of our teens, possibly because that was the age when we were discovering ourselves and our own likes and dislikes apart from our parents. So for me, the best music was in the 70's, but basically, IMO, the entire period of music that was in stereo and on vinyl is good (stereo became the standard in the late 60's, and the last vinyl new release (not CD only) was in '89).