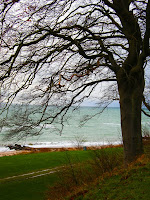 During my years in North Carolina I missed many things, but nothing as much as the proximity of the ocean. Indeed, the beaches there and the coastline of the southeast US is absolutely beautiful, however I lived about three hours drive from the coast and thus seeing the ocean on daily bases was not possible.

Even though I was born in the mountains, I grew up on the west coast of Sweden and came to depend on the view of the sea. Today, my every day drive to work takes me by the ocean and I look forward to those few glimpses of it each day.
Some of you might remember my two posts from this summer, with images of almost exotic, turquoise coloured sea and the green-blue coastline.
The Summer Sea of Scandinavia.

Well, this past week on my drive to work I stopped to film and capture The Nordic Winter Sea. Light years removed from the visions of the calm waters of the summer months, these images represent the force of the wind that powers the numerous off shore wind farms in near proximity.
Gone are the colours of the tropics and the tranquility of the summer air. Instead, they are replaced by a certain raw beauty of savage waters, the colour of green glass and silver steel. Gazing at the raging waves, as they hit the shore, fills me with a sense of unrestricted freedom.

Although I love the summer sea endlessly, there is a certain pristine appeal to the winter sea. Rugged and wild, it is in constant motion, sweeping the beaches, filling the air with salty freshness and cleansing my mind and soul. 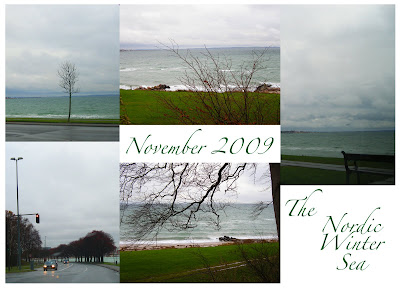 Lovely description of the sea, and winter.

you and you love for the ocean. I miss hearing the sound it makes, am so glad you made this video.

have a great day!

Nordic Sea looks quite threatening in winter. I am so used to associating sea with sun (because I only get to see it in the summer) that I almost feel like this isn't a proper sea at all :)

Btw, I discovered your blog through Bee, it's very nice.

I love the sea in winter. The churning waves and volatility of it is so moving.

What a contrast indeed Protege from your Summer posts and now. It looks cold there now and the video made me shiver almost, but it's a wonderful view to drive past every morning.
I am lucky enough to be near the sea in Dublin and I can't imagine myself ever living too far from it. I grew up on the Atlantic coast and could glimpse the ocean from my bedroom window every morning. After school I wanted to be a fisherman and passed an interview for the fishing academy but by chance my path took me in a different direction. But the sea is a powerful force of nature and I can remember wild Atlantic Winter storms claiming many lives from small boats that fished off our coast.
We can look at the sea in awe and admire it's unique beauty, but we must always respect it.

great pictures! I am already feeling cold looking at those images.

I checked out your summer post (I did not "know" you back then!) and could have sworn that top picture was on a Florida beach!!! Thanks for the pix and the lovely essay that dispels just a few of my mind's stereotype of Scandanavia! C

the sea, the water - different seasons show the amazing power of nature.

when i first came to denmark, i thought they were all completely out of their minds, going to the beach, even in stormy, cold weather. for me, a beach was somewhere to go on a sunny, summer day and work on your tan. but i've since learned to appreciate the beach in all weather. and i do love the nordic winter sea. sigh. great post!

I love the ocean in winter. It is so much more elemental to me.

The gnarled tree makes its own statement about the fury of the wind and the sea. You are indeed lucky to have such a beautiful daily drive to work.

I LOVE the ocean and the glimpses I get of it every day too...it NEVER seems to get old.
I think the reliability of the ocean is the best party...it's the same, doesn't change with the seasons, it's colors are the only thing that differ, which delights me to no end.
I will blog about this soon too!
You are beautiful!

I agree, those winter colors are beautiful! How wonderful that you have that to look at every day!

I love the way you describe the winter sea and know exactly what you mean. Great post.

As a Cancerian, I am tied to the oceans. I love the raging Atlantic of the east coast of Canada, the wild Irish Sea, the tranquil turqoise sea around southern England and although I have never seen it in person, the Nordic Sea does draw me too.
The spectacular cinematography of films like, "Babette's Feast" and "Pelle the Conqueror" have given me a glimpse of those beautiful seascapes and I am held in awe.

Love the new look here, Protege. It is beautiful and a perfect backdrop to your wonderful posts and images.

great pics...i miss the ocean...the sound of her waves lapping at the shore, lulling me with her lullaby...thanks for taking me there today. smiles.

These words are beautiful Z: "Instead, they are replaced by a certain raw beauty of savage waters, the colour of green glass and silver steel. Gazing at the raging waves, as they hit the shore, fills me with a sense of unrestricted freedom."

I really enjoyed your video clip too...we are hours and hours away from the ocean and its beauty! Hubbie and I are journeying to the ocean in a couple of weeks and I look forward to it SO VERY MUCH!

For some reason, I have alwasy associated the grey and wintery ocean with England. It's probably the result of pictures and the stories in the books I've read. I find it unusual, as our oceans and beaches are always under the subtropical spell. Except maybe when a hurricane is on its way. Nevertheless, the sound of the waves crashing, and the music of the sea is so soothing, I bet it is calming and relaxing year-round. So lucky you are so close to the ocean!

So beautiful. I drive over a river every day to go to work. I love looking out at it. Hope your week started off well. Take care. Cheers!

Even though I’ve only been reading your posts for a short period of time I like how you find beauty in almost every situation, especially when you write about the seasons.

OOh i felt cold just looking from my armchair! :D It is cold and windy here in England, but at least today, it is dry and I have been able to wash 3 loads of old dog towells and hang them out to dry!

Gorgeous! I do so love the winter sea... everywhere. But I miss the North Sea most :(

Hi Zuzana
I so love the sea!
Miss it terribly!
But here in Colorado we have the incredible mountains!

While I am away from blogging I know I shall miss visiting you very much!
But I hope to be back sooner than later.
Oh, mum's the word about my being on the computer ....do not let my Dr. know ....LOL!

Take care my friend.
Be happy and stay well.

I've never really been around the water much and am actually kind of scared of it because I don't know how to swim.

Your video and pictures make it looks so cooooooold there!

Beautiful view though, I do envy you getting to see that each day.

I had to share this with Peter, because he is always talking about how he misses living so close to the ocean. He is the kind of Dane that loves going to the beach on a windy day and getting sand stuck everywhere. :-)

Thank you for the lovely photos and video. There's something so elemental and primal about the sea. If I ever leave the mountains, it will be for the big water of the ocean.

Your descriptions of the harshness of the Nordic Winter Sea brought to mind the writings of James Herriot in his descriptions of the wild beauty of the North Sea and the Yorkshire Moor winters. I should love to see it myself. "C" and I will be on a cruise in the Carribean in early Feb. I have to admit that being on the ocean with no land in sight will be a little disconcerting for me. V.

Thanks for this post, Zuzana. Your coast looks a lot like ours in the Pacific Northwest. I go for walks no matter what the weather, but if it is too cold and windy, I like to read books by the fire, or dance (Eastern European, Balkan, Rom, Croatian, Bulgarian, Serbian, Greek, Thracian, Hungarian, etc.).

The wonders and beauty of the sea. How can one live without them.

you described the sea so beautifully!

Such a contrast to your Summer Sea - a remarkable transformation. Our nearest coastline here in the east of England is the North Sea and these pictures remind me of the wild grey, steeliness of that coastline - we have to go west to Cornwall to get a warm blue sea!

Your drive to work must be invigorating, at any time of the year!

We share a love of the water! Where we live now, I drive over a bay bridge when I go to town and it always makes me happy to see the water.

What a beautiful way of looking at the sea! :)

I love these images of the sea. I don't get to see the sea much these days, and yet in the UK we were only about 5 kilometres from it.

=Lynne,
I agree with you, too bad you can not see the ocean now. But then again you get it in return with the stunning landscape, which pictures of you often post.;) xo