As it goes, there is major misconception that the above statement might not be true. Beautiful women are often considered exactly that; beautiful. They are judged by their appearance and no one even assumes there can be anything of substance to find in the beautiful shell.

As a woman in the world of science, I pay attention to women that came before me. In no way can ever claim to be in the same league as any of the famous females in history, that contributed to the changes in the world of science and technology. But I like to think about the fact that they existed. These strong women that made their mark and excelled because they worked hard and devoted their life to something they loved and believed in.
I also admit being somewhat shallow relishing in the fact that some of them were indeed beautiful. Or I guess, it might be my sense for that, which is aesthetic in an intelligent manner. An appealing woman, that pays attention to her looks, yet seems to posses an open mind, astuteness, curiosity and uncanny genius, encompasses my natural ideal.

The other day I watched a short documentary about a life of exactly a woman like that, the Austrian-born American actress and scientist Hedy Lamarr.

Considered an international beauty icon and often proclaimed to be the most beautiful woman in the world, Hedy was mainly known for her charisma conveyed by the silver screen.
Already as a teenager she was cast in movie roles and in 1933, when she was only nineteen, she married Friedrich Mandl, a Vienna-based arms manufacturer, 13 years her senior. Mandl prevented her from pursuing her acting career, and instead took her to meetings with technicians and business partners. In these meetings, the mathematically-talented Lamarr learned about military technology.
Unhappy in her marriage, she managed to leave her husband and escaped secretly to Paris and later to London. 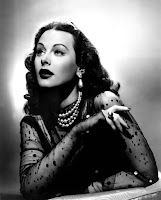 In Hollywood, she was usually cast as glamorous and seductive. Her American debut was in Algiers (1938).
At one point she lived as a neighbour to the avant garde composer George Antheil, who had experimented with automated control of musical instruments. Together, they developed a "Secret Communications System" which they envisioned to be used against the Nazis in World War II. By manipulating radio frequencies at irregular intervals between transmission and reception, they invented an early form of signal encryption.

Lamarr and Anthiel received a patent in 1941, but the enormous significance of their invention was not realized until decades later, during the Cuban Missile Crisis and subsequently emerged in numerous military applications, after the patent expired. But most importantly, the "spread spectrum" technology that Lamarr helped to invent would stimulate the development of digital communications and wireless operations, such as those that today are in use in ordinary cellular phones.

Hedy Lamarr received recognition later in life for her invention and likewise have been featured in magazines, adds and articles over the years.
She became an American citizen and lived in Florida until her death in 2000.
Posted by Zuzana at Monday, November 02, 2009

So as a beautiful woman, do you feel that you have been able to command respect? :) I know that when I was kinda sorta attractive I did not realize at all that there were people who thought I was ditzy precisely for that reason. At that time, I was actually bright as well.

Now that I'm not so much to look at and my brain is unreliable, I am often totally ignored, which can be depressing but in some ways I guess it means all pressure is off :)

A hollywood starlet with brains? They don't make those anymore. Thank you for sharing the story of this incredibly interesting woman.

I'd love to be a brilliant, gorgeous woman. The fact that i misspelled gorgeous three times is probably proof that i'm neither. LOL

She was an amazing woman. How wonderful that you highlighted her.

i don't know her. So thank you for sharing her story. Such a remarkable woman. Id be googling about her all night till am satisfied.

Great post, Ms Beauty-with-Brains! Wow, I'm a big movie buff and I had no idea about this story! Thanks for sharing. I'm going to read up about her.

I always loved Hedy in anything she acted in. Now you surprise me with this...but I never doubted her intelligence...it takes it to make it in life...
Sandi

I always loved Hedy in anything she acted in. Now you surprise me with this...but I never doubted her intelligence...it takes it to make it in life...
Sandi

I think women can be both beautiful and smart. There are plenty of them out there. Great post on Hedy Lamarr. She was an incredible woman. Have a fantastic week. Cheers!

Good Morning, Protege: This was fascinating! Hedy Lamar was mentioned in Bob Hope jokes, but in a nice way. I did not know about her brilliance in Science. I would argue that you are definitely in the same league. You have your own unique style, Protege!!! A very interesting outing here!!!!:)

The combination of beauty and intelligence is a blessing for both a man and a woman!

Ahh very interesting post. I knew nothing about Ms. Lamarr other than she was an actress. Beauty and brains.. lucky for you, you've hit a double-header. :)

Wow, I had no idea she did more than acting! Interesting info!
Brenda

when i first saw the title, i could not imagine what you would be writing about my wife, but...rather neat story and one i did not know. intriguing...

Hedy Lamarr is one of the most fascinating women...especially since she helped develop something that is very fundamental to my area of study. :-)

I think you are beautiful AND brainy, Protege! :)

An interesting post. I did not realise that she was a scientist.
I've just popped over from Sandi's blog by the way.

Thanks for sharing this wonderful story. She is a very beautiful woman! ;-) It's amazing all the things she accomplished.

I hope your having a wonderful day!

...anyone that underestimates a BEAUTY by thinking they are NOT bright are foolish INDEED!!!

Lamarr is gorgeous AND brilliant!

What a fascinating woman!

Wow! I love this post. My co-blogger, V, and I just began (I mean only just began!) a "side" blog of reviews (there are only a couple so far). One of them is of biography of super-woman Emily Hahn. If you're interested, see review at the link in our sidebar. Thanks. C

Lamarr was indeed a geat woman - proving that you can be beautiful and intelligent! Great post and links. Thanks for sharing her fascinating story.

=Beep,
ah, I so wish I could call my self beautiful.;) Looks aside, I have been lucky enough to find myself respected by others, both in the works place and among strangers and friends.
Always happy when you stop by dear friend.;)
xo

=Cairo,
thank you for your lovely words; glad to know that you enjoyed the story of Hedy.;) And you know what; I bet you are brilliant and gorgeous as well,;) xoxo

=Nessa,
glad you agree on the fact that Hedy was in a league of her own.;) Always enjoy your visits.;) xo

=Denise,
ah, I knew you would enjoy this considering you have both beauty and brains.;) xoxo

=BPG,
I am delighted to know you enjoyed getting to know the other side of glamorous Hedy.;) Your visits always make me smile and your words warm my heart.;) xo

=Sandi,
so right you are, a pretty face is never enough, it has to be backed up by intelligence.;) Love when you visit.;) xo

=Keith,
completely true and I like to believe that fact.;) I knew you would enjoy a story about a Hollywood icon.;) Your visits are always very much appreciated.;)

=Michael,
as always, your comments are so kind.;) Even though I am far away from her league, it is still so flattering to know you think this.;)

=Phillip,
I agree hundred percent.;) Always happy when you stop by.;)

=Hilary,
you leave the best comments my friend.;) Glad you enjoyed this piece of information about a gorgeous and smart woman.;)

=Donna,
so right you are, she indeed was.;) xoxo

=sprinkles,
I agree with you, at times it is nice with surprises like these. I really cherish your visits.;) xo

=Brenda,
thank you very much, glad you enjoyed this post.;) xo

=Brian,
what an absolutely great comment! I relish in the affection you carry for your wife! I am sure she is one remarkable Lady.;)

=Jacki,
of course, you if anyone would appreciate the science behind this story.;) Always glad when you stop by, dear Jacki.:) xo

=Betsy,
ah, you are way, way to kind to me, I only wish you were right. Thank you for your kind words.;) Right back at you.;) xo

=Lynne,
welcome and so glad you stopped by, please come back again.;) xo

=Shelly,
yes, she is an absolute icon, so glad that you too enjoyed her story.;) Your visits are always very appreciated.;) xo

=Jill,
thank you for those wise and brilliant words.;) Always happy when you stop by.;) xoxo

=gaelikaa,
I agree, thank you for always finding the time to stop by.;) xo

=Stickhorsecowgirls,
welcome and thank you for stopping by; your place sounds very interesting and I will make sure to pay you a visit.;)

=Jeanne,
thank you dear friend, so happy you too enjoyed the story behind this gorgeous face.;)
xoxo

What a great story! Never heard of her before, nor about both her artistic and scientific contributions. There have been - and certainly are - amazing people, women and men, around the world, huh? Thank goodness! :-))

I have never known this about Hedy Lamarr. Thanks for digging up this untold story about her and sharing!

that is a great story! and how awesome that she was so stunning on top of it!! yay for beautiful brainy women!!!

=Claudia,
I was not aware of Hedy Lamarr's scientific talent until I saw the documentary and found it to be likewise intriguing.;) Always so happy when you stop by.;) xo

=Keera,
glad you found this interesting as well.;) Your visits are always appreciated.;) xo

Fascinating! I never knew about Hedy Lamarr's scientific achievements (nor did I know she lived until 2000). I'm with you...I just love learning about women who are beautiful and also highly intelligent. Thank you!

=sallymandy,
glad to see you back! So happy you agree with the sentiment of this post.;)
xoxo