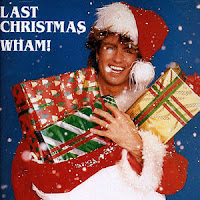 The next four installation of my Flashback Friday will be in the spirit of the season. To me the Holidays start with the last weekend of November, meaning that tomorrow is a very special day in my white house on the hill. But more on that later.

Meanwhile, I hope you all will bear with me, as I present to you my four favorite Christmas compilations during the weeks leading up to Christmas.
I know some of you are already (or will be soon) fed up with all the Christmas music that is played relentlessly on the radio. I however admit being one of the few who relish in exactly that fact. I simply love this holiday and anything connected to it, including the music.

This first piece I recall very fondly as a major hit. Made by Wham!, it was released in 1984, when I was a teenager. Me and my sister sat glued to the television set as soon as the top ten hit shows were broadcast that winter, just to get a glimpse of the video. I loved foremost the harmonies, while my little sister loved the images. The story must have appealed to her romantic sense, as perhaps she too longed to live through some of the sentiments depicted within; spending time in company of good friends in the mountains. And, as sometimes life has it, my sister very much indeed made her dreams come true; in a few years after that she met and married a handsome Swiss man (and a talented skier), who took her away to live at the foothills of the beautiful Alps, in one of the most stunning parts of Europe. She did get to live out the story depicted in the favorite video of her past. With one exception; it did not include a broken heart.

So, without further ado, here is Last Christmas, which I dedicate to my sister, together with all the memories of wonderful childhood Christmases we once shared...

great flashback. i remember WHAM! from my days as a teen as well. brought warm smiles to hear it.

have fun and stay safe out there in the madness this morning!

Kind regard Zuzana from Germany where I am for a 10 days trip!

I love ANYTHING Christmas, including music. I listen, every day, pretty much all day long, to a Christmas radio, either online, or on the local radio. Or I'll play any of my many CDs! :-) Wham's song is a classic!, and a must for this holiday season. Cannot wait for the following Flashback Fridays! Be sure I'll be among those who won't have enough of them ;-)
My Christmas season also starts this weekend! decorating the house tomorrow. Cannot wait! I hope you enjoy your start of the season! Happy starting to the season weekend!

It was good to hear about your sister's story. Wish her all the very best.
We too liked this song a lot and it was played and replayed during our hostel days
It was great to listen again after many years

Protege: It's nice to have good memories and also to make new ones! I enjoy your spirit about Christmas!! I hope I'm horseback riding that day!:D

I loved Wham! way back in the day! Thanks for sharing an oldie but goodie.

Happy belated Thanksgiving my dear Z! (Yes I did my own falling asleep on the couch.;)) I adore that picture of you!:):)

oh i love this song. I sing this Christmas or not.

I used to go the their concerts; I liked George, my friend liked andrew...we thought we may 'double date' one day....*L* Wonder what Andrew's doing now?

=Brian,
thank you; glad you recall this fondly from your youth as well.;)

=Phillip,
I hope you are having a great time on your trip.;)

=Claudia,
so glad to find a kindred spirit.;) I too love this holiday and this weekend the Holidays started for me.;) Always so happy when you stop by.;) xo

=Julie,
so happy you too love this piece and I agree with you on every word.;) Your comments always make me smile.;) xoxo

=Sumandebray,
glad you enjoyed my sister story with the happy ending.;) Your visits are always appreciated.;)

=Michael,
thank you for your visit; horseback riding sound great.;)

=sprinkles,
ye, those were the days, right.;) Glad you too remember and like this tune.;)xo

=Holly,
yes, go 80's!;)) I know we both share love of music made in that decade.;) Hope you too had a lovely Thanksgiving dear friend.;) xo

=Denise,
I agree, Christmas or not, it is still a great compilation.;) xo

=Helen,
yes, George is talented and I have always liked him and even more as a teenager. I have no idea what happened to "the other Wham guy".;) So happy when you stop by.;) xo