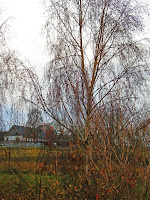 This week was again cloudy, windy and rainy. The sun has been absent for two weeks, but today the cloud cover was slightly lighter and a hazy glow appeared for a minute or two in the southern skies.

This would in no terms be described as sun. However I guess it ends the all time record that the first two weeks of November has bestowed upon us. On average, we receive around 50 hours of sunshine in Denmark in the beginning of this month. However, until now, we have only had 3 hours of sun. This is the lowest amount ever on record. And the few sunshine hours occurred only in the southern and northern part of the country. Some of us (like me) have not seen the sun for 14 days. And let me tell you, it has stated to effect me. It effected my mood and I have never been so tired as this past week. Novembers are dark as it is, but the cloud cover made the last 14 days feel like one long night. 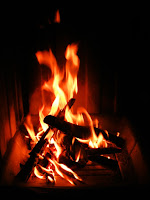 Some changes have also taken place in nature; foliage is now almost absent and the air is damp and cold. The other day when I stopped by the ocean on my way to work to watch it's raging beauty, I could sense winter in the air for the first time this season.

In November the best place to be is in front of my fireplace. Starting now, the fire will be lit very often in my white house on the hill and both me and Batcat will enjoy its warm glow.

I hope you are having a very nice and cozy Saturday, Zuzana. I have just gotten up and am enjoying my coffee sitting by your "virtual" crackling fire!
It is much the same here, as you described it, with the sunshine so thin and weak when it does struggle to appear(although, luckily, we have had at least a little more true sunshine than you have in the past 2 weeks)and I find myself tired by 4:00 every afternoon.
Wouldn't it be nice to win a trip to somewhere bright and sunny right now?(Australia? Brazil?)

The fire looks wonderful. Personally, I'm not fond of this time of year, right between the end of fall and beginning of winter. Once the trees are barren of leaves, I would love to see snow cover the branches in icy beauty.

Have a great weekend! :)

You fire warmed me this chilly, wet morning.

Pretty fire. Hubby asked me to build one this morning, but if the temps outside are not cold enough, we end up opening windows to cool down. :0)

Love that you can stop by the ocean on your way to work - that must be wonderful to see.

Wishing you and Batcat a lovely weekend!
Zuzu

I can almost feel the toasty warmth from that fire. There's nothign quite like curling up in front of a roaring fire when it's chilly outside. :)

November has been a dark month. My daughter and I were driving home yesterday from her dance practice around 5:30pm and it was already dark like it was 10pm. It made us feel tired and a little sad because she was just getting home from school/activities and the day seemed over.

We did enjoy our fireplace last night though. That was a very nice relaxing part of the evening. ;-)

What a lovely fire in the fireplace..the best part of winter...hope you get some sun soon! We finally have ours after 2 weeks of cloudy rainy days!
Sandi

its been raining for days...cold and wet...and now i have fire envy! lol. i miss the fireplace we used to have in our house.

Oh, there's nothing like a nice glowing fire. You know what they do here? Make a fire in a metal pot! Not the same, no way!

Don't envy your weather, Zuzanna! Am glad you have a fire place -that really helps! I gave that up moving into the condo this year -we have one where you can only burn a fake log.
BTW I know how hard it is to take very good pics of the fire!!

Your fireplace looks all nice and cozy in that picture. Wish I could come sit by it and warm up!

I really don't like this time of year that much.. i LOVE Christmas shopping etc though :P

But your post makes this time so cozy :D Great pictures!

Wow, that's very little sunlight for the body or soul! It probably has a lot of people rather depressed, figuratively and literally. Hope it shows up soon!
Brenda

but it's getting cold here too. Until January i think. after that it's summer once again for the rest of the year. agh!

It appears to be so nice and warm... But I am not a person suited for cold weather.... I just can not bear a severe winter. I am not even talking about sub zero temperature.
But it looks great to have a fire lit ... like having a campfire every night.
Njoy!

It appears to be so nice and warm... But I am not a person suited for cold weather.... I just can not bear a severe winter. I am not even talking about sub zero temperature.
But it looks great to have a fire lit ... like having a campfire every night.
Njoy!

It is now sunday in the afternoon and the sun is shining a little bit over our island. Hope you will have some too.

So far, our November has been generally more pleasant than October was, which is fitting because our summer only seemed to begin in August. I don't envy the dreary dampness. I know how miserable November usually is.. .but I sure do wish I had a fireplace. Thanks for sharing yours. :)

Of course, Zuzana, I am in the desert here in Phoenix where we are just getting our first bit of cooler temps. Still, I love a nice fire pit to enjoy a drink with friends!:)

=Tina,
glad you enjoyed the fire.;) And it sure would be lovely with a trip to the tropics.;) Hope you had a lovely weekend my friend.;) xo

=Michelle,
I agree, I am not a fan of late autumn nor the winter here, which is dark and rainy.;) xo

=Zuzu,
I wish I could heat up the house to that degree.;) Thank you and I hope you had a lovely weekend as well.;) xo

=Cairo,
I so agree, curling up in front of the fire is one of the best things about winter.;)xo

=Shelly,
my sentiments exactly, the afternoon feels like nights already. Glad you too can enjoy the fire.;) xo

=Brian,
at least you can heat up seeing mine.;) Always happy when you stop by.;)

=gaelikaa,
I understand what you mean, but at least it is a fire after all;) xo

=jeannette,
yes, the benefits of real fire are amazing.;) And so right you are about the pictures.;) xo

=sprinkles,
thank you, you are always so kind in your words.;) xo

=Maria,
thank you so much for stopping by.;) Glad you enjoyed this post.;) xo

=Brenda,
yes, we did get some sun yesterday (Sunday).;) Thank you for your kind comment;)xo

=Denise,
what a wonderful climate you live in.;) Still I am happy you enjoyed the clip.;) xo

=Sumandebray,
I so understand what you mean; if I could choose, I would like to lice in southern Europe where the summer are hot and long and winters short and mild.;) xo

=Elizabeth,
we also did get some sun eventually, just like you.;) Hope your weekend was lovely too.;)xo

=Hilary,
right now the weather is very ad, the worst; damp, cold and rainy. It will be better once we reach December.;) Glad you enjoyed the clip dear friend.;) xo

=Michael,
yes, there is just something infinitely cosy about a fire.;)

Inspiring fire. I was thinking on bringing out my "chimenea" last night. Nights are chilly around here. Of course, NOT even close to what you experience up north, with 3 hours of sun so far (??!!!), but chilly enough for us. I wish I could send you a little of our warmth and sunlight. The weekend was sunny, and a little hot at noon. Nice after the cold and grey days. I will try to explain our bizarre weather to you, and to the world, in a post soon :-)
Have a great day! *hugs*

I love to sit by the fire and stare/daydream about wherever it takes me! SOOOO relaxing!

Yes, you beat me too it. I love a fire in the fireplace. Wish I could share some of our sunshine, we are too warm for a fire today.
Kat

=Claudia,
I to have a chimenea.;) I use it on my terrace in the summer times.;) I look forward to the weather explanation.;)xo

=Jill,
I agree, that is so cosy and relaxing.;) xo

=Kat_RN,
we have very little sun in November and December unfortunately, but we make up for it in May and June.;) xo