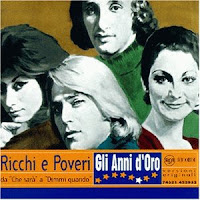 I was fifteen years old. Spending July in the archipelago just outside the city of Gothenburg in Sweden with my aunt, I can very much recall the pristine, but rugged beauty of the northern islands. The sound of "Mamma Maria" could be heard on all the Swedish (and the European) radio stations, while the feel of this melody was in such a contrast to my Scandinavian surroundings. It was one of the greatest hits of the summer in 1982 - catchy, happy, filled with appealing harmonies and the italian language made it sound exotic and sensual. Even though I did not understand a word of it, it sounded so beautiful.

Ricchi e Poveri is one of the most famous Italian pop music groups in Europe and Latin America. Active since the late 1960s, they have sold over 20 million records, recorded in Italian and Spanish. Solely responsible for some of the most popular Italian songs of the 80s and 90s such as "Mamma Maria", "Se m'innamoro", "Made in Italy" and I guess their greatest hit "Sarà perché ti amo", they appear almost iconic today.

Still, despite the multitude of compilations, the below is my favorite one of them all. Every time I hear I am transported back almost thirty years in an instant.

That is the everlasting power of a melody.

Hello. Come to my blog for the award. Your blog deserves it. Hi Radka.

very nice. well our snow has begun...going to be a long weekend beneath the white blanket of snow. hope you have a grood one!

Another Euro-centric group I had never heard of..until now. They make me think of an Italian ABBA.

You have intrigued me with this "rugged, but pristine" northern island where you visited your aunt in Sweden--photos?? More memories?

Have a great day, Zuzana(dancing to "Mamma Maria"?)

Though I was much older that 15 this is one of those songs that reminds me of my life at the time. I'd not heard this version, but it is indeed wonderful!!! Thanks for the memories!!! Cathy

Love the music!
Love all the wonderful posts you share!

Have a wonderful weekend, Zuzana!

I do know that song!!! :-o
Not the exact lyrics that is, but I do remember listening to it while I was very young. The statement of them being popular in Latin America - which at first doubted, as the name does not sound familiar at all, but then I thought I was VERY young at the time, and not aware of much around - is true. The song did travel our way. I guess since Italian and Spanish have a lot in common, it is only natural that many of their artists make it big on this continent (Laura Pausini, Nek, Eros Ramazzotti...)
great song for today!
*hugs*

Music with lyrics from the romance languages always has a certain appeal.
They remind me of ABBA from the ’70. What a difference from the Hip Hop of today that sounds more like grunts and groans.
When I need motivation, either for the gym or projects around the house, upbeat music makes the chore much more pleasurable.
One of the best antidepressants is “music” that gets your toes tapping. Have a great weekend.

That's one of those songs that will get stuck in your head easily and you sing it all day. Very fun. Enjoy your weekend, Zuzana!

This is a very happy song...got my feet tapping : )

The only Italian song I know is the one from Ocean's Eleven. I don't know if I'm spelling it right " i'L appuntamento, By Ornella Vanoni

Sadly I am not that familiar with Italian pop, I know some, but never heard of these guys. Thanks for the look-in. I know the Gothenburg archipelago much better, I spent many summer holidays at Gullholmen. Beautiful area! Take care Zuzana and have a relaxing snowed-in weekend in front of the fire.

You've been to lovely places and have tonnes of memories and experiences in your being. I am glad!!!

I grew up listening to "Mama Mia" as well.

Joy always and a lovely weekend.

When I first read your title, I thought, "No, it's Mama Mia!" Then I read your post and realized you weren't talking about ABBA. LOL

Music has a great way of taking you back to anytime any place.

Always some lovely music on Fridays.

I am getting ready to out and this happy pop music foot-tapper has put me in a good mood already!
Have a great weekend Protege(and Batcat)

That's such a great tune - happy and carefree!

After a misty start it's turning into a really lovely morning - spring is just around the corner for us here I hink - I do hope your snow stops soon and you see the beginnings of spring also ...

Have a wonderful weekend. Jeanne x

Great Song. You keep bringing to us things that we in the USA are unfamilar with. I love it!! It amazing how a simple thing as a song can transport us to wonder memories and we start reliving them as one thing reminds us of another thing of the past. LadyCat and I have a candle chandelier somewhat like yours hanging in your beautiful window.
Have a great weekend. :) The Bach

Great music - I love music that reminds me of a time gone by :)

Radka, Brian, Tina, naveen, Cathy, Margie, Claudia, Scribe816, Betsy, LadyCat, Alex, swenglishexpat, Susan, sprinkles, Lynne, Blogaire, Jeanne, The Bach, Eternally Distracted – thank you all for stopping by and taking the time to listen to this unusual music from my past. I am glad you enjoyed this style, even if it is very different from what most of you listen to.

Your visits are always very much appreciated and your comments make me smile.:)