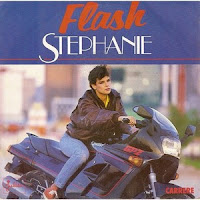 Most of us are familiar with the fairy tale story of Grace Kelly. The stunningly elegant and sophisticated American beauty icon that met and married a prince, becoming princess Grace of Monaco.
When I was a teenager, the youngest daughter of the royal couple, Princess Stéphanie, was in her teens as well. Considered a somewhat rebellious child, often termed the wild princess, she was constantly in the tabloids, in less than flattering stories. We read about her escapades and her relationships and I guess at that time, she truly was a wild child. Although in today's world, I think her behaviour would be considered much less problematic than twenty years ago.

Princess Stéphanie enjoyed also a brief singing carrier. Although dismissed by many, I truly enjoyed her unique music style. Her soft, fragile, almost childlike voice and catchy melodies were very appealing and she did climb the European charts with her big hit "Ouragan" (Hurricane) in 1986.
Taken from her first album entitled Besoin released in the same year is also the compilation below. "Flash" became number one in Sweden, where I grew up. Still a teenager myself when this song was a hit, today I relish in the absolutely familiar eighties feel that envelops me every time I hear it.

I had no idea that she sang.
Mike is really sick of the snow now. There's still a bit in places on high ground and snow is forecast. So let's hope it stays away, although I don't mind it so much.
Hope it disappears for you soon.
Have a great weekend.

very nice...ut definitely has an 80s feel to it...i could hear it on a movie soundtrack as well...

She does have a soft sweet voice.

I had a deja vu moment when listening to it; I was transported back to my huge curly perm, legwarmers, iced champink lipstick from Miss Selfridges and matching jewellery with shoes....my high heeled,cerise pink patent shoes were my favourite. Wow....

I remember when Bad Girl Stephanie(as compared to her better behaved sister Caroline) was in the tabloids all the time! I had forgotten all about her until I read this today.

But, I had no idea she had a singing career or even hit records. This song is so very completely 80's in sound

My mom has been, for some reason, a European royalty fan for as long as I can remember. She follows royal families and people of importance from than continent through magazines (mainly) and now through cable tv channels (from England, Spain, and the such). I became acquainted with Monaco's story at a young age, and remember Stephanie (Estefanía in Spanish) and her wild years. She sang with Luis Miguel as well, you know? A very popular singer still today, and quite the Casanova...I think they had a brief relationship as well...it seems that royalty, or very rich people for that matter, try everything, huh?

I love royal families. It's a fantasy, the kings and queens and princesses. wow! I think apart from the spotlight they are just normal people. Divorces, car accidents, delinquencies, drunk driving and so on. It's just a little hard for them don't you think?

Uh I liked that recording. I did not know she had a singing career either.
I sent you an e-mail about the FSO.
QMM

Oh, I'd forgotten all about Stephanie's foray into pop music! I went and watched "Hurricane", too, and remembered one reason why I liked her: We have the exact same body shape as well as the square jaw. :-) Nice to see someone like me in a video amidst all the oval-faced, curvaceous blondes. Another reason I liked her was that I felt she deserved some sympathy; she survived the crash that killed her mother.

Thanks for the blast from the past!

I vaguely recall her singing career but I don't remember any of her songs. I do remember her tabloid history though!

For some reason, I suddenly can't watch videos online. It just happened within the last couple of days. So I'm disappointed that I won't be able to hear this song.

Hope you're having a fabulous day!

Sprinkles, try reinstalling Flash (from Adobe). That may solve your video problem.

Never had a soft spot for Stephanie's music. For me it belonged to the category radio music. No sweet memories here.

Thanks for stopping by today and I wish you happy ponderings and a lovely weekend. See you soon beautiful lady.

At first I thought, what did I miss, but then it hit me, I was in the States in 1986 with my nose in the books, studying hard. But I can enjoy her music now -you're right -very eighties! Thanks!

My, this does remind me of the 80's, Farrah hair, huge pink glasses, fake nails!
Thanks for stopping by Rustique Gallery. I always love to hear from you. Sherry

Great post here, Zuzana! Love the song, nice beat...Since the Olympics are going going, I think it would be a great song for the skaters. Have a great weekend! :)
The Bach

Lynne, Brian, Nessa, Helen, Tina, Claudia, Denise, QMM, Keera, sprinkles, Elizabeth, jeannette, Sherry and The Bach - how delighted to hear that most of you actually recall Stephanie's wild youth and some of you also her music.
Yes indeed, it is very much the 80's sound through and through. If nothing else, at least a great sentimental walk down the memory lane.

Thank you so much everyone for your kind comments.