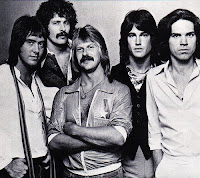 There is something enticing about the soft rock of the seventies. Yes indeed, some of the most beautiful melodies carrying this label, fall under my favorite music styles.

This includes songs by the American band Player. As stated by the famous wikipedia:
"Player gained popularity as a live act during the heyday of the 1970s stadium rock era. They began to develop a distinctive, edgy and melodic rock style. Their biggest hit, "Baby Come Back", rose to No. 1 on the Billboard Hot 100 in 1978 and was a chart success in other countries. Their follow up single "This Time I'm In It For Love" also peaked at No. 10 the same year. Among several notable accolades, Player was named Billboard's Best New Singles Artist of 1978. Eric Clapton became so impressed with Player that he invited them to open for him during his 1978 North American tour."

I became aware of Player first in mid 80's, when I heard their compilations played by the various soft rock radio stations. What intrigued me even more was when I in the early nineties realized that Ronn Moss, who portrays Ridge Forrester on the long running soap opera "The Bold And The Beautiful" was/is actually an active member of the band. I was addicted to that show in the 80's and had a crush on Ridge. How amusing that seems to me now.

All this aside though, "Baby Come Back" is simply magnificent. Instead of describing the timeless appeal of this compilation, I let the music speak for it self.

A lovely song to listen too when I had my cup of tea with my, almost, neighbour.

Have a great weekend with sunshine!!!!

That was a really big song. Haven't heard it in ages. And I never knew about the soap opera.

I didn't recognize the name of the band but I certainly recognize the song. A good one! Funny how a song can evoke so many memories - and this one did for me. Have a terrific weekend. Here comes the sun... that Beatles song is now running through my head. "Little darling, it's been a long, cold, lonely winter..."

nice. i know this one! great song...hope you have an incredible weekend!

I remember this song, but never even knew the name of the group who sang it. Now I do.

Have a wonderful weekend(with no snow shovelling, okay?), Ms. Z.

Wow!! That is the end all of BLASTS FROM THE PAST! Love this song! In fact, I have the 45 sitting right here next to me in a basket of all my old albums and records!!
Have a great weekend my friend! Stay warm!

As soon as I red the title of your entry, I was singing already! :-)) I knew it was a "classic", but never knew it was from the 70's! How did I become acquainted with it then?! My mom did not listed to music in English when I was little, and even so, I was barely 2 years old, going into 3, by then hit year. Hmmm...another curious case.
Have a great weekend ahead!
*hugs*

Protege: Definitely a distinctive period in American music. I'm always intrigued by artists who have one or two hits and then seemingly fade away from view. Have a great day! :)

Zuzana, that was fun to hear again and see the pictures. Do you compile the pictures? Many of them took me back to former vacations, many are future dreams. Very lovely! Sherry

I LOVE this song Zuzana - you have just made my day!

I remember Player very well and indeed this song brings back many memories ...

Talking of Eric Clapton, me and himself saw him in concert at the O2 Arena in London a couple of weeks ago - Jeff Beck was also playing - another stalwart from the 70s!

Off to to have another listen now ...

Have a lovely weekend.

Mmmm, love this song. I remembered the song very well, but should I admit I couldn't remember who sang it? Loved listening to it again, "thanks for the memories."

I haven't heard this song in soooooo long! And I'm so disappointed I still can't hear it. I really gotta figure out why I can't watch videos online anymore!

What a fun flashback Zuzana, thanks!

Hi Everyone.I am Player's Webmistress and they are still out there performing. Go to their websites for more info. They still sound great and look great.

Thank you for writing this blog about Player. There are two original members left, Peter Beckett(the awesome voice) and Ronn Moss on bass.

Hi Zuzana
That was a great song and I really enjoyed hearing it again.
Thank you for sharing it!

Have a wonderful weekend!
Be back here on Sunday as taking a little trip with my husband and will not have internet in the cabin we are staying in.
Look forward to your next post.
And, I thank you so much for the lovely comment you left for me today!
You are a joy!

I love this song too AND this band! I never put together that Ronn Moss was in this band! Cool fact! I too, watched many episodes of The Bold and the Beautiful years ago!

Hello and thanks for visiting me. It's wonderful to meet new folks who stop by.
This post about Player is a wonderful memory. Thanks. Still lovin' Ronn Moss and his beautifully chisled face. IMHO he is one of the most handsome men ever. Hey, a girl has got to Dream!
Later~ ~
Ahrisha

Elizabeth, Nessa, Beverlydru, Brian, Tina, Julie, Claudia, Michael, Sherry, Jeanne, Rosezilla, sprinkles, Laura, Patti, Margie, Jill and Ahrisha – thank you all for your absolutely lovely comments! I am so glad you recall this beautiful, over thirty years old compilation. It simply doesn’t get much better than this. Talented and good looking men.;)

I am always happy when I can bring back sweet memories from your past. Thank you all so much for taking the time to stop by and listen.

A special thanks goes to Patti, who maintains Player's homepage – so glad you found your way over here..;)

I like very much this song,I will keep it.