Anyone who has lived in Scandinavia recognizes the lack of daylight in winter. The dark winter months, when sun is absent for weeks at a time, are indeed difficult to bear, as our winter and summer days differ by about eleven hours of light.

Slowly, as we reach the end of February, the closing winter season signifies the return of the sun. Or rather, the conclusion of the dark winter days.
The sun has by now moved significantly further up in the sky and is setting about three hours later then in December. This means that it has left the hills in my immediate south and has almost reached the natural horizon, as it disappears on the evening sky.

I have mentioned numerous times in the past, how much I love the magnificent sunsets, which I can watch from my windows. This past weekend, for the first time since October, the skies once again offered a true sunset. A sunset over a snowy landscape, a barely just sunset, but a first visible sunset nevertheless.

This is the first significant sign that winter is closing towards its end, despite the final snow fury it keeps bestowing upon us. 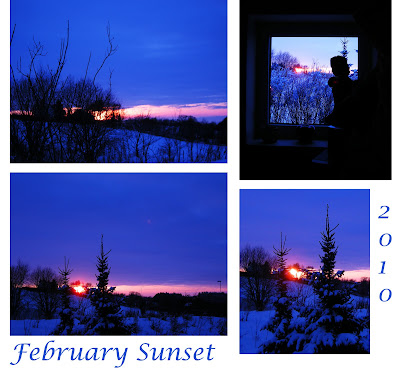 Wow what a view.

My My Zuzana, you live in a place as amazing as you. I can imagine the weeks which are dreary and dark and I am glad that you have the sun now.
Wishing you lots of sunshine and warmth.

Those are lovely photos. I do miss the snowy glitter of Sweden. My husband has decided he doesn't like snow at all. But we both love the cosy interiors of Swedish homes, beautiful, I do miss that!

Thanks for the post of the day heads up, I had no idea!!

beautiful...love watch the sun rise and set and all the colors it puts on display. hope spring is here soon!

February sunsets are some of the best(although I had a look again at a Nov. sunset you shared here as well)and your photos captured it so well!
I miss driving my daughter home from piano lessons(she has stopped lessons for a while) because it was always around sunset in Feb., that we were able to see the magnificent sky over a marsh coming down a hill on the way back.

I noticed the snow-covered lamp with the "Life is an adventure..." quote--a nice visual touch to your blog!

And what a beautiful one...certainly worth waiting all winter for! :)

How beautiful. I know it must be appriciated even more to you. Love the picture with your shadow.
Kat

What a magical sunset. The colors are amazing!! Nature is wonderful, isn't it? and it never stops surprising us.
have a great day!!
*hugs*

Beautiful photos of the sunset. I like how the snow looks blue against the fire of the sun.

It's the very picture of hope.

I love your sunset pictures Zuzana and these are really special. The sky and snow look blue against the bright red orange of the setting sun. It must be reassuring to know that the dark days will soon be over, to be replaced by the wonderful light you enjoy in your Scandinavian summers;)

Gorgeous photos. Brrr, it looks so cold. The sun is low here as well, but not so dramatic as your elusive sun. I like what Julie said, it does capture the essence of hope. Tomorrow will be even brighter.

Your sunsets are spectacular.

Beautiful photos Zuzana - is that the view from your house?
We are starting to see the days lengthen here in the UK too, and the first signs of spring approaching.
Best wishes
Dan
-x-

Such awesome sunset pics, Zuzanna! What is very interesting to see is what what's in the shadow is such deep blue!

The color of the Danish sky is so pretty to me. I love that shade of blue. I'm glad the sun is returning to your sky.

Hi Zuzana
What a truly beautiful sunset!
I just keep staring and staring at the wonderful pictures you have shared!
Thank you!

And thank you for your visits to my blog, I always look forward to them and so appreciate your lovely comments!
You are a loyal visitor and that makes me quite happy!

I do so enjoy my visits to your blog and each time I visit here adds joy to my day!

Have a most wonderful day!

That purplish-blue light is absolutely gorgeous!!!

Woke up this morning to several inches of snow. Yuck! I had thought we got the last of it and that we were slowly moving into spring. Guess not! Still, it's better than where you are. I ran some errands earlier and a lot of the snow had already started to melt. And the roads were all nice and clear. I have no room to complain but I'm hoping it's not here to stay!

just exquisite Zuzana, thank you for sharing your view with all of us!

Wow, you've really captured some of nature's most beautiful scenes!
Again, you are so kind to share these.... we wouldn't have been able to enjoy them otherwise!
:) The Bach

Lovely sunset Zuzana,Isn't it a relief to know that seasons always change...
Lo! and behold! the Sun is here....
;)

Absolutely BREATHTAKING. I love seeing the world through your eyes.

All joys and we're not too far from spring now,

Ocean Girl, Susan, Lynne, Eternally Distracted, Brian, Tina, Betsy, Kat, Claudia, LadyCat, Julie, Jeanne, Richard, Nessa, Dan, jeannette, Stevie, Margie, Hilary, sprinkles, Laura, The Bach, seema and Sharon, thank you all for complimenting my photographic skills (although the camera and nature deserve all the credit) and for finding the sunset beautiful as well.
As the sun is returning, my posts will feature this beautiful part of the day quiet often.

Your kind words and lovely visits are the highlight of my days. Thank you all so much for stopping by.

I always enjoy your views...it is so much fun to peek across the world from the comfort of my home. (I'd rather get on a plane and come see for myself but that takes a bit more planning and money!) I admire your patience with the dark days of winter. That would be a huge adjustment for me.