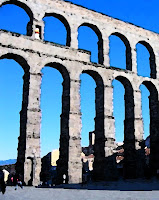 I have always been fascinated by ancient Rome. I guess, foremost by the ancient engineering and the state of the Roman civilization, in regards to the infrastructure and the technology.

One of the most intriguing Roman structures must be the Aqueduct. Although these are very much associated with the Romans, aqueducts were devised much earlier in the Near East and Indian subcontinent. The fact that Romans often get away with the credit is that all across Europe, in the parts of the former Roman Empire, one can find very well preserved remains of these spectacular architectural achievements. Some Roman aqueducts are actually still in use, although I found conflicting information about which ones indeed are. The two millenia old aqueduct in Segovia, Spain was at least still in use fifty years ago, supplying the city with water. And the renowned Fontana di Trevi in Rome does receive today water from a modernized ancient aqueduct called Aqua Virgo.

One of the most beautifully preserved and famous is Pont du Gard in France. It was built circa 19 BC and is today a World Heritage Site. Although it is by now suffering from the tides of time and is unfortunately in a great danger of collapsing in the near future.

Roman aqueducts were extremely sophisticated constructions. They were built to transport water inside the arches, within small channels across the Roman Empire, supplying city fountains and baths with fresh water. The principle is very simple - the aqueduct is constructed in such a way that it is titling or leaning in a very shallow gradient of remarkably fine tolerances. For example, at the Pont du Gard, this gradient accounts of only 34 cm per km, descending only 17 m vertically in its entire length of 50 km (31 miles). This is absolutely incredible, as to the naked eye the structure appears completely horizontal. The challenge of an aqueduct was to get this gradient right, because it would overflow or clot if not. Powered entirely by gravity, it could carry large amounts of water very efficiently. The Pont du Gard could transport up to 20,000 cubic meters — nearly 6 million gallons — a day, and the combined aqueducts of the city of Rome supplied around 1 million cubic meters (300 million gallons) a day.

Considering the absolute simplicity behind the concept of the construction, combined with an impeccable building precision, these structures are to me as astounding as any of the seven wonders of the ancient world.

Your interests and posts are as colourful and deep as your personality. I don't know if its true but it is said that the water supply system in ancient palaces and monuments like the Taj Mahal and others were quite efficient. The Moguls also were very good in their planning of buildings which is sadly lacking in today's town planning.

history fascinates me more than the technological advancement of today...how interesting the solutions they came up with. i guess someday someone may say the same for us, but...

I saw the aqueducts on my visit to Italy to celebrate the 'Big 50.'I was fascinated by their construction.
What surprised me even more was if you got up close there was a faint inscription that said, "Owned and operated by the evian water company." ;-)

Fascinating! They were not only functional, but beautiful. I'm impressed with the precision that was required to make them work. Quite a feat to build!

What a great post!!
It reminded me of a TV documentary on aqueducts and how they built them in Rome. Very interesting indeed!
South to Guatemala city, one can witness the remains of the old aqueduct, that used to provide fresh water back in colonial times. It's not longer in used, as part of it came down with the many eartquakes. But the remainings are untouched and serve as historical and touristic attractions. (I should take pictures of it and share!...you always come up with the best topics!!)
Have a wonderful day! Spirits high on my side, as it is sunny and clear today! :-)
*hugs*

I love reading about history so this post was very welcomed!
Thanks for sharing the video about the Point du Gard, it's truly incredible!

Your varied interests are a delightful addition to my daily blog learning through browsing experience. I had to watch the video with the sound off, so I missed the commentary but enjoyed the scenery a lot. The aqueduct is beautiful as well as functioning.

That IS fascinating, Zuzana. We learned about them in school as kids, but this brought it all back! :)

These acquaducts are amazing. Pretty and functional.

Thanks to you for helping me meet my goal of learning a few wonderful kernels of history every day.

You enrich our lives.

This is really facinating! I'd seen pictures of aqueducts before but had no idea what their purpose was. I honestly just thought it was just because of it's beauty!

Thanks for educating me each and every day. I always look forward to visiting and wondering what I'm going to learn today!

Zuzana,
Thanks for sharing all of the info on these beautiful structures. Just to think of the man hours and energy that was used to work these to completion is amazing. The Bach

Very interesting post Zuzana! It brings home the message that water is a precious commodity, and always was, even in ancient times. I commented recently on how lucky we were in Ireland because water is plentiful and free - how naive I was! The recent "big freeze" caused many old water pipes to burst and millions of gallons of were lost. The authorities had to restrict supplies by cutting it off every night and a Green Party government Minister has promised to introduce metering in the near future. Perhaps the ancient Romans with their fabulous Aqueducts were more advanced than us!

Rome is an amazing place. I've only seen it through pictures and movies, but I've always wanted to go. Sigh.

These are gorgeous and as you say, quite brilliant in their deceptive simplicity.

Very amazing! Thanks for sharing all this info. I would love to travel to Rome!

I hope your having a good week!

Fascinating facts, but have you thought of the size of the spirit levels they must have used to achieve that exact gradient! ;-)

Thanks for this post, Zuzana. I especially love the Pont du Gard. It is elegant, brilliantly situated. I went swimming under the arches years ago.

I love Roman History and have several books on Caesar. I remember my oldest brother had a book when I was a child on the seven wonders of the ancient world and I loved to read it and look at the pictures. Your posts are so interesting.

I a agree with Margie and I do love reading about history too. So, this post is very welcomed to me and I much enjoyed it!

Susan, Brian, Scribe, LadyCat, Claudia, Margie, Stevie, Michael, Nessa, Sharon, Donna, sprinkles, The Bach, healthylife (welcome!), Blogaire, Lizz (welcome!), Rosezilla, Shelly, swenglishexpat, subu (welcome!), Laura, Richard, Mahmud, Sandy and Phillip – what a delight to read your comments, finding that you too share my interest in these beautiful and unique structures from the ancient world. I am infinitely intrigued by historical traces of time and considering some are millennia old, their mystique never ceases to amaze me.

Your kind words and interest makes posts like this one a joy to convey.
Thank you so much for taking the time to stop by and for your kind words.
Always.