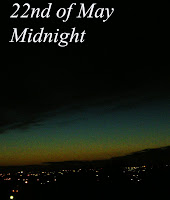 The long winter and extensively delayed spring has so far caused a lack of joy, which I usually feel during this time of the year. I am trying very hard to reinstall it in my consciousness by reminding myself, that although it feels far from it, the best part of the year is indeed here.

The cold temperatures in May and April, with very few heat waves instigate a sensation of literally no spring. I fail to feel its presence, despite the bloom and the green growth. It is similar to ones dreams and desires - when fought for and awaited for too long, once they come true, they do not bring the satisfaction one has hoped for.

The only time I feel that indeed this is the season of magic is when I look at our night sky. The nights are white and almost absent. Before bedtime, when most of the world is already fast asleep and I open my windows to let in fresh breeze from the west, I can see traces of sunset finales, which colour the heavens in yellow, red and purples. Even at midnight, as the city below comes alight, the sky is not dark and the onset of darkness becomes exponentially delayed by each day. We have now gained ten hours of light since winter solstice in December and are one hour short of the longest day which will occur in about a month.

As seem on the two images below, taken at approximately the same time point, about a week apart, the increase in light is close to impossible to comprehend. 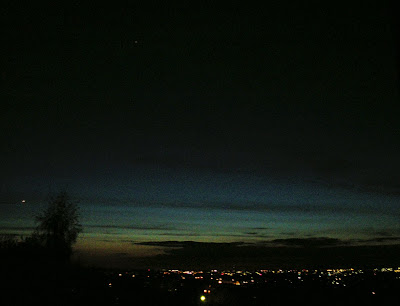 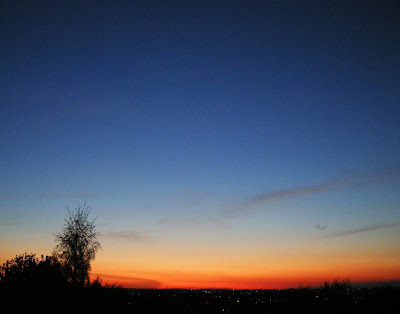 Oh Zuzana you do sound fed up and I am not surprised. I hope it warms up soon and you have a long, warm summer.x

What a beautiful pictures you made.

Today we have a sunny day!!!! I count my blessings.

wow, what a difference...i love sleeping with the windows open, that gentle breeze luling me to sleep...

I love the long days of summer. And so dislike the dark days of winter - only the holidays get me through them. It is going to be light out in Alaska until late at night while we are there. That will be something new for us. I enjoy your comparison photos - what a difference in your sky views. Have a great day Zuzana!

Wow. The sky is so pretty. Breeze in the night is always enjoyable.
Have a good day!:)

Hey there. Thanks for the comment on my blog. I appreciate it. Great post here. I enjoy checking out your blog. Hope you've had a wonderful week. Enjoy the upcoming weekend.

I agree, it is as if spring has been squeezed out of the calendar!

Wow! beautiful takes, and ever amazing phenomenon! :-)
Interesting enough, and while I have heard as of late that it's been pretty crazy weather-wise in the north, it's been rather "normal" here in Guatemala. So far, every month has delivered what it was supposed to this year: wind and cold in the beginning of year (first two months) increasing the heat later, until arriving to our very hot summer in March and April. And though it was rather warm the first days of May, it quickly turn into rain, typically beginning in this month, going on until the end of October. It's been a long while since we had what it's normal and expected, so we are rather pleased. Worried, though, that the excess of each (too much heat caused droughts, too much rain cause another enless list of problems) always causes damages in more ways than one. Oh well...can't have it all, huh?

have a great day!

Lovely, sweet nights of May!

What a huge difference in the amount of light in those two photographs!

I feel like summer will never get here. We didn't have any fall at all last year, it just went directly from hot summer days into cold winter. And it seems winter is determined to stay. In springs past, it seems like they started out chilly but got warmer as the months wore on. This year, we get a tease of a few days of warm weather and then it turns cold again for several more days. And then the snow last Saturday, which is completely out of character, just did more to depress my dampened spirits.

Yesterday late afternoon finally warmed up, hoping it will today too. We're forecasted for thunderstorms today and tomorrow so we'll see.

Thank you for your response. By visiting my blog. I really like your pictures and your blog. happened whenever I see something new. Although not leave any comments you visit. Your pictures are beautiful, ofcourse your land is beautiful.
so still delights with beautiful pictures.
My blog is of general interest put a little of everything. My post today is dedicated to women and the importance of orgasm. ji.
pardon my English.
I look forward to your visits, I continue to come here.
these are my other blog. if you want to visit.
one with my pictures.
http://archivofotograficoahr.blogspot.com

two with my work in Iraq and Palestine ... Palestinian my blog contains a lot of things that are not mine. my thing is better ordered in the bar on the right ...
http://palestinaya.blogspot.com/
http://iraqdiariodeviaje.blogspot.com/

I hope you are smiling Zuzana, you sound so sad that it makes me worry for you...a bout of homesickness, maybe?
hugs
Sandi

Zuzana,
Your skies are totally gorgeous. Thank you.

Zuzana, It will happen, it really will! I know what you mean about joy, though. Until a couple of weeks ago, I didn't know if I would really come alive again like I seem to do every spring. But I feel it now. The roof rack is on the car and I'm hoping to get my kayak on the lake this weekend. Planting flowers has helped!
Happy Weekend!
Sherry

In your part of the world the night sky is spectacular.

Wow! Another great post
as per usual! LOVE your
blog soooo much! Such
an inspiration! Am
definitely bookmarking
you! Hope you can stop
by mine sometime :)
xx

i miss you Zuzana

Our White Nights are very special and always a source of incredible magic to me. They give us back the light we lost in winter and in combination with warm evenings extend our days and lift our spirits.
As I am positioned in the southern most Scandinavia, you can imagine that the just few hundred km north the light effect is much more pronounced and there the nights are completely absent.

I always appreciate your time and kind words,

I always love those late night summer photos of yours. That small one on top looks like the sky is a rainbow. That's an incredible difference between the two lower photos. I'll trade you a bit of our warmth (very hot here this week) for some of your longer days. ;)