Flashback Friday: "In The Waiting Line". 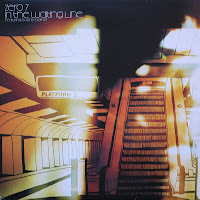 Initially I thought the compilation below does not qualify for a Flashback just yet, as it still feels so very modern and new to me. However, realizing it is almost ten years since its release made me again so very aware of the relativity of time...

Thus may I present the "youngest" Flashback here to date, with its wonderfully escapist and ethereal feel.
Perhaps the name of the artist and the song might escape you, however, once you listen to it, it might be perceived as somewhat familiar. It is performed by Zero 7 , a duo based in the United Kingdom, known for using guest vocalists in their work. Their sound has a very pleasant, jazzy, downtempo style to it.

"In The Waiting Line", from the 2001 album Simple Things has been used in numerous soundtracks, among others for the Sex And The City and House series. It has that certain meditative sound, that makes us want to close our eyes and relax...

Have a wonderful, relaxing Friday everyone.

This was a really pretty song! I've seen a ton of the SATC episodes so I kept thinking I should've recognized it but I didn't.

Wow. This is such a beautiful song. You're right, its very relaxing to listen. Lovely post!:)

I love Zero7… I have a couple of albums of theirs that I’m wearing out. : j
If don't already know him, you might also like bonobo… Try “stay the same” (http://www.youtube.com/watch?v=U3-_gZY7nWA).

I’ll look forward to catching up on your posts when I get back.
Take care Zuzana, read you in a week or so. : D

nice one zuzana...a great mellow feel, and a great beat...10 years, yeah i think it qualifies as music it seems is behind the times after a week...

what a wonderful way to start the weekend, zuzana! yes, i remember/know the song - beautiful! and thanks so much for sharing - it's always such fun dropping by your place - have a wonderful weekend!

I like it! There is a "louge/chill-out" sound to it! though I must confess I never heard of them before...maybe I have heard their relaxing tunes, but never really knew who was behind them.
have an equally lovely Friday! and a good weekend ahead :-)

loved it.
you are such an expert when it comes to music...
Happy Friday!

Zero 7 is one of my favorite band...I love their music so much it's so unique and beautiful.

Something happened with my Firefox and I can't watch Youtube videos...so annoying! Cause I would really love to listening this song now...

Have a great weekend dearest Zuzana!

I LOVE it!!! Thanks for this!! You have fantastic taste! Looks like I've missed several of your recent posts...has been such a busy week...so I'm off to catch up! Love, Janine XO

Ten years is like 100 in music years. I'm glad this one qualifies because I wouldn't have known about it if it wasn't. Thanks! It's wonderful.
Happy weekend,
jj

Sprinkles, Mr. Stupid, Alesa, Brian, Tina, Philip, gypsywoman, Claudia, Jingle, Evi, Janine and Joanna; your words made me smile. I am happy that some of you enjoy these Flashbacks and take time to stop by and listen.
Thank you so much for your kind visit.