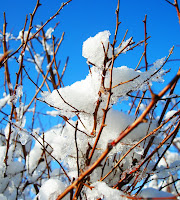 The second month of this year and officially the third (and last) month of winter is closing to its end, bringing the end of the season ever so closer as well. Not that we here in Scandinavia can tell, buried under all the snow.

I guess everyone knows that it is the shortest month of the year. But did you know that February is the most misspelled month? Its name is derived from the Latin word "Februum", which means "purification", via the purification ritual Februa held on February 15 in the old Roman calendar.

Here is a collection of Fun February Facts:

∗Amethyst is the birthstone for February.

∗The flower of February is violet or primrose.

∗February is National Cherry and Chocolate Month (among countless others), which explains all those Valentine's Day gifts of chocolate-covered cherries.

∗And the best fact for me: The day has in my part of the world increased by 3 hours and 30 minutes since the winter solstice.
Posted by Zuzana at Thursday, February 25, 2010

I was interested to know that your days are getting longer, so quickly. It is staying light til about 5.30pm here in England.Have a lovely day!

Ever closer to wonderful Spring. We're all perking up.

Glad your days are getting longer.

Interesting to read the February facts, (hope I've spelt it correctly)! Roll on March with the longer daylight hours.

sonic has an amazing cherry chocolate shake in honor of the month...hard to believe the second month of the year is about to slip away.

Thanks for the meander. I do think most of the world spells Scandinavia WHITE in winter! -J

I've noticed that our days are finally getting lighter longer here too. Even though we have mostly had overcast, gray skies. It's snowing again today - my Merry Maid told me this morning we are suppose to get a foot of snow. The last two snowfalls haven't melted yet. We have daylight saving time coming soon so that will help to extend our light longer in the day. Everyone is longing for spring here. How did you settle in Denmark? You sure have lived all over the world. Do you have a favorite place?

So Spring is getting closer by the day!...good for you!
Interesting facts about February.
Have a great day!

Zuzana, you've missed out Valentine's day. Never mind. All the other facts are as interesting. We learn so much about your landscape through your posts. It is a delight. I am glad that you know so much and impart all that knowledge to us. You have proved that earth is indeed our house and that one should be aware of the landscape where we dwell.

Once again I'm impressed with the color of your sky. Such a crisp, clear cerulean blue, it makes me swoon. Sky watching in Denmark must be a national past time not only for the sun but for its many beautiful hues as well.

Yay!
Your day has increased by 3 hours and 30 mins!
Now that is something to smile about :)
I'm smiling for you, Zuzana :)

Thanks for sharing all those fun facts about Feb.

The old Romans, eeh! They knew, not only to move water slowly for long distances (as in your aqueduct post) but they had their annual bath on 15 Feb. It must have taken a long time to fill the bath. :-O

On a more serious note, your winter picture is beautiful!

My mother was born in February & always loved violets. Now I know why.
Cherry chocolate...amazing combination!

Even though February is the shortest month of the year, I've found it seems to be lasting an eternity this year! Not sure why.

That's wonderful that your day has increased so much in such a small period of time!

Thanks for all the fun facts about the month!

Violets and Primroses are such a perfect flower for February. I wonder what the flower for December is - my birthday month!

I love that the days are getting longer her, too. Today is one more day closer to spring and that means enjoying the garden...

I've always had to double check my spelling of February. :)

Almost spring! It will be there before you know it.

All very interesting facts. I can sure support February being national chocolate and cherry month. I wish that were the same here. I need more reasons to rationalize my mass consumption of chocolate lately. (Yikes!!) :):)

Thanks for sharing all those wonderful facts about February! I love February too because it means Spring is near. Our days have been getting longer and I love that! Our weather is getting better and better, but we still have been getting lots of wind.

I can't wait to see pictures of all your beautiful flowers.

Three hours and 30 minutes... that is an increase in daytime.. you supplied a great deal of February facts..hang in there. we're almost into Spring. :) The Bach xx

Very nice post. You have put together beautiful facts for this month.

Ferbuar... Febura.. Frebru.. Februray .. The month before March sounds pretty darned good after all. Especially that chocolate and cherry part. ;)

Kath, Nessa, gaelikaa, Lynne, Brian, J, Chandrika (welcome), Sandy, Claudia, Susan, Stevie, Margie, swenglishexpat, LadyCat, sprinkles, Jeanne, Rebecca, Rosezilla, Holy, Shelly, The Bach, Rajesh and Hilary – so glad you enjoyed this somewhat boring post about mundane February facts.;)
I love all your kind comments and appreciate your visits at all times.
Thank you for taking the time to stop by.