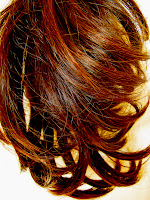 I am returning after almost fourteen days of absence back to the online world. I never envisioned to be away for this long and I would certainly have warned everyone that such was the case, would I have known it myself beforehand.

The best in life is however that which is spontaneous and unplanned and I have simply decided to give into beautiful moments, letting my guard down and forgetting my routines. I have done so with great satisfaction, spending the last two weeks with people that mean the world to me.

I have rewritten this post numerous times as often one lacks words to adequately describe happiness and content.
Thus eventually I decided to announce here only one single piece of news:

I have cut my long hair.

Yes I did. My very long, way below my waste hair, my pride and joy.
And it feels really good. 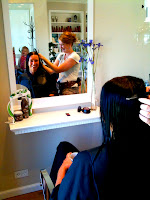 This was an action not initiated by me - yet I surprised myself to have agreed to it, despite the fact that I shun beauty saloons and have not let my hair nowhere near any scissors for almost eight years.

Ultimately I guess that is the allure of life - when we least expect it, change will enter our reality with an unprecedented ease. It will come softly and without effort and we will give into it without fear.

While I watched the hairstylist work her magic, locks of my old hair kept falling silently onto the floor in the beauty parlor. I then realized there was so much symbolism in those discarded strands. I felt in a strange way liberated from lapsed years of my life, those filled with hardships and to a certain degree stagnation. Now they were left forever in the past, where they belonged.
Not forgotten, simply just concluded.

I realized in no uncertain terms that I am about to move on - and the hair cut is only the beginning. 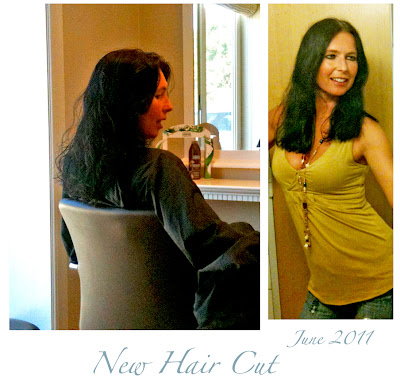 Wow! Good for you! I know the feeling of liberation cutting your hair can give. However, I grew mine again! I guess it's just embedded in me to keep it long. I hope you enjoy it. It will be wonderful for the summer, no doubt :) It looks great!!!!!

You should see my huge grin right now and a little tear. I am so incredibly happy for you and your new haircut is a powerful statement to tell the world that you found the place you want to be.

Have a wonderful day my dear Zuzana and I'll talk to you soon.

Good and brave you! I shaved my head bald for my mom when she was going through chemo. It was indeed liberating. Did you keep it?

Well, it looks good to me. I would think it will be easier to take care of. Of course, not having any hair at all, I find the less you have, the easier it is.

You look like a model Zuzana!
You still have a lovely flowing mane, with which to toss, flirt and bewitch x

How wonderful! It must feel so freeing. I know I always feel great after a haircut. I go back and forth between short and midlength. Right now it is long enough for a little ponytail and that makes me happy since it is so hot. Your new do looks great and will be easy to manage. Enjoy! Best wishes, Tammy

I also agree, that one of the most amazing things about life, is its spontaneity :)

it looks beautiful of course...and it is good to see you...there are a couple things in here that confuse me a bit but will email you. have a wonderful day zuzana

So many people cut their hair at times of change... it really is symbolic often... I love this new symbol of yours - you look utterly gorgeous!

Gorgeous and amazing. You have 'lightened' yourself up...and you know I LOVE that!
I have had the desire to do the same thing lately...how interesting!
You are so pretty. And so very inspirational!

Your hair is still quite long... and soooo beautiful. It suits you and takes years off your looks too! Good for you for a new start. Maybe it's the full moon?

That looks wonderful... must be liberating, and bear in mind, for most people, that's still lovely, long hair!

You look great...love the new cut! I'm so glad that you are having such a wonderful time...you deserve it : )

It looks lovely.. and not much different.. only shorter. :)

Not initiated by you? I'd like to hear the story behind that. ;)

Margaret (Peggy or Peg too) said...

Beautiful! Youthful and gorgeous!
Good for you for letting go.

Welcome back! and...looking good!! I love how your hair looks now. Still long, but just enough of long...does it make sense? and you look so young! Indeed, this one seems to only be the beginning of great and good changes in the future. I'm so happy for you!
have a lovely day!

We've missed you! Your new cut looks great and I know it symbolizes your new life!

Well, Zuzana...as I have said...there is a NEW GLOW to you and it is NOT the hair! The hair is gorgeous and so liberating! You know...I do HATE change and resist it SO VERY MUCH but when you say things like: "change will enter our reality with an unprecedented ease," It seems quite do-able! :) SO HAPPY FOR YOU!

Ohhhhhhhh, the wonderful power of symbolism...

I know what a big step this is. New beginnings await you.

Still, I'm curious about the rest of the happiness - 14 days? Hope you had a blast. I did miss you.

I almost emailed you because you had mentioned being away for a four day weekend and then you were gone for 2 weeks and I got worried. I'm glad all was good though.

Your shorter hair is very pretty! I know it's a big change but it'll be cooler during the summer months and will have time to grow back in winter again. Or who knows, maybe you'll decide you like it short!

How very very exciting!! I am truly happy for you Zuzana!!! You look just downright sexy and empowered in that picture!! :) I really applaud where you are allowing your life to take you right now! LOVE YOU!!
-Holly

I am so happy for you! You are gorgeous, and I am glad this moment is a part of a beautiful odyssey. Awesome!

Wow! You look amazing!! And I'm not just talking about your hair!! You're gorgeous dahling!! :)

Good to see you back online. You look great and happy to know you had good time.

You have beautiful hair. I think the haircut makes it look vibrant and super healthy. Congratulations on being brave and making the change. I believe, like you, that the good changes in our lives gives us the courage and freedom to make other changes. It's an exciting time for you and I'm happy to share your happiness via the blog world.

I am not quite sure what to say without overstepping the mark! You look younger ... and this is where I have to stop! ;-)

I love the analogy of shedding of your hair. Interesting to think about. ♥

wow! I did not know your hair was that long. I bet your neck thanks you. did you have neck and headaches? I like the new do. very nice. another question, did you donate the long strands cut off for cancer patients? I know my sister grew her hair just so she could do that once.

how lovely! how wonderful!
you look fantastic!

i have been slowly taking my hair shorter with each trip to my hairdresser~i hate stranger messing with my hair and all the false primping they do. however i found a girl in the village (who i have known since she was young as her parents live near my mum!) who understands i hate mess and fuss and really am a 'wash and go' girl!

my hair is now above shoulder length, but cut short intot he neck like a boy with the front longer...all a bit mary quant but wild!

Wow, this takes so much courage. You are one brave woman, dear Zuz. You look wonderful!!!

I love it!!!! YOU look gorgeous Zuzana, absolutely radiant!

hey zuzana u really look great in the new look.every letter in ur blog seem to come ot from ur soul.Iguess u live life passionately

As so many of you point out, a change in our lives is often reflected in our own personal change as well. We experience a need from time to time to alter our own looks as well to adapt to the change that is taking place outside and within us.
I have been incredibly lucky to have met a man whose love has made me see myself in a different light and whose gentle guidance has put my life back on track. He simply brings out the best in me.

Thank you all for your very warm words and your understanding about my unannounced absence.;) It is good to be back (albeit for a short while) and I have missed you all.;)