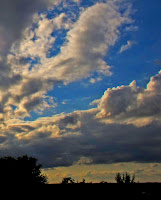 I am summer child and as such I am vivacious and full of life and passion. I also hold a certain sensitivity to natural wonders and thus I will forever stand mesmerized when watching the evening heavens in the sixth month of the year, the annual midpoint.

This year, the longest day of the solstice offered spectacular skies, which came across as endlessly enchanting, almost divine or biblical, full of dramatic thunderheads with shooting sun-ray beams, painting my westerly view in cool azure blue mixed with platinum white and anthracite grey, adding a hint of warm orange.

Trying to eternalize the evening skies with my camera, I was overwhelmed by a plethora of sentimental emotions. Prevailingly a certain soft sadness, bordering on gentle melancholy, as I became aware of one unmistakable fact - once again the threshold of light has been crossed... 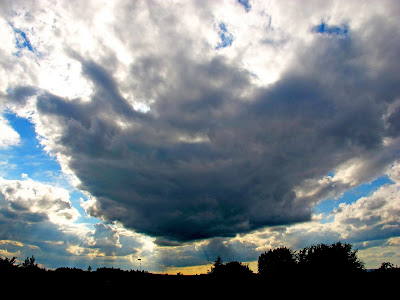 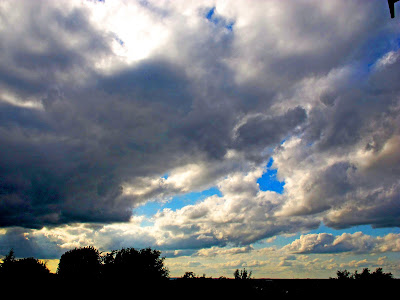 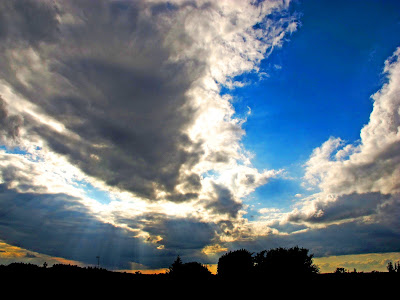 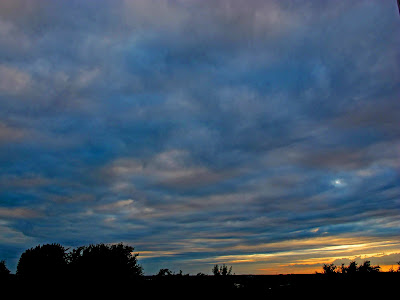 AMAzing photos, Zuzana.
And it's true the month of June has some magic which other months do not. Especially for the light it brings... long days I love.
Shame is for me the heat gets to be unbearable these days at my place, but, what the heck, that is what summer means and is... and this is what we've been longing for ever since October!
;-)

nice...those skies seem to stretch forever...love looking at the clouds....i hope that you have a great time this weekend...big smiles.

Such intrigueing shapes. I love to watch the clouds. Great photos! Have a wonderful weekend my lovely.

The blue skies with the clouds running through are wonderful.

Have a great weekend Zuzana!

Gorgeous skies! We don't get such brilliant colors this time of year. Today the skies are grayish white because of all the dust up there. :/ Have a fabulous Friday. Tammy

And such delicate musings, on the Summer Solstice.

Have another lovely weekend...

Wow - what dramatically gorgeous skies. It was grey and cloudy here with monsoon rains so I didn't manage to get any good shots of the solstice sunset this year...

Thanks for sharing yours!

i am a summer child too. my birthday is july 10 - as a fellow cancerian i am wondering when is yours zuzana?

wonderful pictures! those look either like it's about to rain, or that it just rained here in Guatemala :o) Enjoy the light Zuzana!

Beautiful skies...such an amazing shade of blue. I am a fall person, but do always miss the fun of summer as it wanes.

Those skies are so dramatic! Perfectly captured images as ever Zuzana.

June IS a special month isn't it. I always feel a special infinity with June people. My lovely OH, my best friend, my dear late father and my elder sister all share a June birthday. I wonder if you are a June person too...

Have a lovely midsummer weekend!

Gorgeous skies in your part of Denmark, not that I have anything to complain about in my part. Your pictures are beautiful and full of life.

You always take the most beautiful pictures!

I was taking pix of my boys this weekend and they kept coming out blurry. I realized this was because I didn't have patience to make sure the shot was just right. I just focused the camera and clicked away. I really do need to think about things more before pushing that little button.

I'm in awe of the beauty of these sky pictures!
Just breathtaking!
I'm smiling, Zuzana :)

Extremely lovely skies! love the bursts of deep blue and the golden lines near the horizon! Have a lovely weekend Zuzana!

Such beauty! Your photos are stunning! I too feel the same mixed emotion's of crossing the threshold of light yet celebrating all joys this summer will bring.
Loved it!
Deb

WoW! Zuzana! You Have Some Mighty Strong Skies Above You! Have A Fun Weekend My Friend.

You paint a beautiful picture with your words and back them with your photos. Do you also paint...I seem to sense that about you...I could be wrong.

I have been wrong many times.

These skies are gorgeous--reflections of you!

What a way to paint a landscape with words! I love June and July, but at the end of it I begin to notice the loss of light one minute a day and I can't wait to start again

I love the view of the sky in your place. They are beautiful.

I agree, Zuzana. June is very special. Have a wonderful weekend! lol!:)

I am in complete agreement with you :) I only wish our weather here was cooperating better! Biblical is the perfect description of these skies! Fantastic! :)

gorgeous skies Zuzana...enjoy these days of light and ease.

One look at your photos and it's easy to see why you love June so much-- What beauty!!!!

Hope your weekend is a grand one.

Those are fabulous images. Yes it's hard to think that the days are shortening now, sad too.

Beautiful as always. June is one of my favorite months as well. Thank you so much for sharing the beauty!

Gorgeous shots, Zuzana! Like you, I am a summer child and love every minute I can spend outdoors.
Wishing you much joy,
Zuzu

After reading your blog for a couple of years now, I will always say that Denmark has the most beautiful skies in all the world. I'm always thinking about the quality of light as the say ends because of you.

I take however no credit, it is all the work of my camera and nature itself. The views out of my windows right now are simply breath taking and if/when I leave my house on the hill I will miss them with all my heart and soul.
Thus, the many captures that are housed on my hard drive will bring back recollections of these stunning moments, reminding me of their endless beauty so effortlessly.
And perhaps, new skies with other kind of magic await in my future.;) One should never stop moving.

Thank you all for always finding the time to visit and to leave wonderful comments full of kindness and care.

Your skies are amazing - so filled with light and shadow and so dynamic. And you write lovely prose :)