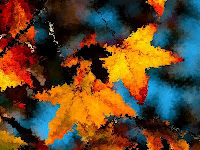 Do you ever pay attention to the numbers in the date? I do. Today is one of those days, when the date is the same, no matter how you read it; a palindrome. Of course this requires you to spell it the short way and it requires that you read the 09 as one:

I like this as it reminds me of symmetry and I like symmetry. But then again, I also like randomness. In some ways I am full of contradictions; I like when everything around me, or in the universe, follows order an functions according to laws; that is the scientist in me. But then again, I also love the mysterious, the curious and the unpredictable; that is the artist in me.

The wikipedia tells me that September 9 is the 252nd day of the year (253rd in leap years) in the Gregorian calendar. There are 113 days remaining until the end of the year.
So what has happened on this day in history? It seems that actually quiet a lot; here are a few events:

1543 – Mary Stuart, at nine months old, is crowned "Queen of Scots" in the central Scottish town of Stirling.
1791 – Washington, D.C., the capital of the United States, is named after President George Washington.
1850 – California is admitted as the thirty-first U.S. state.
1947 – First actual case of a computer bug being found: a moth lodges in a relay of a Harvard Mark II computer at Harvard University.
1956 – Elvis Presley appears on The Ed Sullivan Show for the first time.

If anyone is interested in the full list, including birthdays of famous people, it can be found on the wikipedia page.

Additionally, today is a big day for Beatles fans, as up to fourteen, digitally remastered and sound improved old albums are re-released.
Posted by Zuzana at Wednesday, September 09, 2009

I seriusly think this was an amazing post. It gave me something to think about...

I realised that this was going to be a "9x3" day when I was writing out the date on a cheque at the doctor's yesterday--pretty cool!!

I have always liked the number 9--maybe because my husband was born on a ninth day.

Now, I am going to follow your link to see who's birthday it is today....

Great post. Very interesting. It is always neat when we come around to dates like this. Thanks for sharing the historical info with us.

Curious to learn about the first computer bug!! In Spanish, we known the date number coincidence as CAPICUA, and is something they've been talking about, even on the papers (because of the Beatles remastered music), for a number of days now. For the superstitious, this must be either a positive day, or a really bad one, don't you think?

Just don't turn the numbers upside down..then we're all in hell! :D
Love the new look of your blog!!
Oh, and I am a fan of the Beatles and would love to buy some of the remastered works...but will have to wait till xmas! The recession has hit my purse! :(

How interesting about the history on this day! I do like dates like this, they just seem cool. I notice times on the clock too. For some reason I like 10:01. And I looked up your old post on the Medieval Faire. They are so much fun, aren't they? The weekend thing my son went to was more participation where the faire is more performance. Both are a blast. One of my sons has a full outfit just like a musketeer, with the plumed hat, tall leather boots, rapier, full "blouse-type" shirt under vest and everything. he's tall and thin and looks perfect. Another son has more of a peasant outfit, almost - it was kind of based on the Hobbits at first.

What I love about your blog Protege is your ability to take the simplest notion and make it into an interesting post! I love the fact that something historically important has probably happened on most dates throughout history. Is it also true to say that there is a significance of numbers in nature -I remember seeing a documentary about it some time ago?

Have a great 'almost palindrome' evening!

My hope is that the date is lucky and money will appear from nowhere so I can buy the Beatles albums ;)

=MelRoXx,
thank you so much sweetie, I love your comments.;))xo

=Tina,
I hope you found may people that you liked.;)) What month is your husband birthday?
Hope the 9th was good to you.;)) xo

=Jill,
yes, it is fun, isn't it? I wrote that date all the day yesterday on notes and solutions in the lab.;)) xo

=Phillip,
I really agree with that, good point.;))

=Keith,
I love to pay attention to these odd things in our life, glad you enjoyed this post.;)

=Claudia,
how fun that you have a term for this occurrence! Yes, I agree, it either means good luck or bad luck, perhaps it depends on the numbers.;)) xo

=Lulda,
good point!;)) I know what you mean about the lack of money, I think we all feel it.;) But then at least you have something to look forward to.;))xo

=Rosezilla,
wow, great outfits for both your sons! They must look stunning! Ah, I really love those festivals.;))xo

=Jeanne,
ah, thank you for your very kind words!;) I am so glad (and very flattered) that you enjoy my posts.;)
In regards to the symmetry in nature, you might be thinking of the "Golden Ratio" and the "Fibonacci Numbers". Now you have inspired me to do a post about it!;))xoxo

=Beep,
I am wishing you all the best of luck in finding that wining ticket.;)) xo

I agree with you on this, I love symmetry and yet am quite a random person, quite erratic actually. A huge Beatles fan was really happy to learn about their records getting digital.

Both Leo Tolstoy and Hugh Grant, I found out, have Sept. 9 birthdays. :-)
My hubby's birthday is Dec. 9(same as Kirk Douglas's and they both have cleft chins!)
Yes, yesterday was alright--very busy--but now that you mention it and I look back on it--not a bad day at all.
Let's hope this 10th day of Sept. is equally as good, if not better(and one day closer to Friday!)

That's what I like about you, that you like the scientific and the mysterious. You're a picture of symmetry yourself.

=sujata,
yes, I guess we are all quiet complex.;))I hope you can get hold of some of the Beatles records.;))

=Tina,
your husband is really handsome.;)) I hope you will be having a wonderful weekend.;))

This is a new concept for me.

=gaelikaa,
happy to introduce you to something new.:)) xo