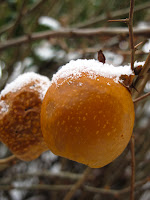 Crossing the vernal equinox this week, we have officially entered the second season. Winter however seems to think otherwise. The Ice Lady never leaves voluntary and fights to the bitter end to remain in reign in my part of the world.
Her wrath is endless and currently absolutely fierce, making this March one for the record books as the coldest ever meassured.

Nature and animals yearn for spring and so do we. Everywhere I look, there is a pristine blanket of spring snow and the easterly winds blow arctic air over us, keeping the temperatures below freezing.

The only vernal sign is the light. The sun is raising earlier and setting later by each passing day. There is something altered about the daylight as well, as it slowly turns platinum instead of golden.

Despite the final fury of the winter, a point of no return has been reached and that universal feeling of an approaching seasonal shift can clearly be perceived - the best time of the year has already begun. 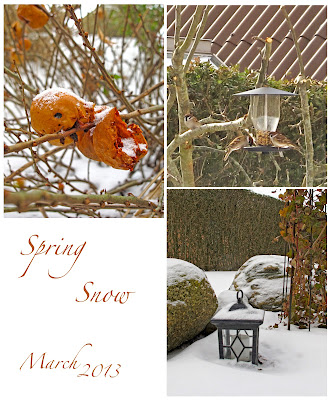 Another very cold week is predicted, let's hope the sun will regain its power and smelt the snow/ice away.

Hope you are doing better Sweety, enjoy your weekend and I'll talk to you soon.

Although it's cold, there is something delicious about the spring sun on the snow that just warms my heart.

ah we are much the same....it was 78 saturday and then an ice storm sunday....this coming weekend they are calling for snow....crazy weather...but def can sense and see the change in the light...

Oh yes... may Spring truly be upon us all soon. Here in Canada sometimes we get a gentle fade in, but often times it's a violent transition from freezing grey conditions, to sweltering humidity. Bizarre! I love spring, especially when accompanied by a week or two of heavy blossoms. Great pictures as usual!

They did say it was going to be a very cold spring. Maybe this means a very hot summer too. But it feels good in the morning to go out into fresh cool air. One misses it and this is why we always look up at the snow capped mountains in summer, wishing for a small change from the heat.
It kinda makes you feel cooler doing that lol

Our spring here in BC is green but also chilly One doesn't know how to dress.I live in the southern part specifically chosen because I don't like shoveling snow lol
Have a great Week Zuzana!!!

Mother Nature has a mind of her own. She sure is beautiful though. Hope her mind turns to spring soon and that you have a wonderful one. I love the way you write about the weather and its changes.

Time to celebrate spring for you.
And out here we see the good weather being driven off by the hot and scorching summer.
Soon temperature will soar to 50 degrees making it difficult daytimes

Seems like no matter where one is in the Northern Hemisphere, March is still a wild and crazy month.

It's similar here.. I'm growing weary of the weather. Last March, we were walking around in t-shirts and sandals. Of course, it snowed sometime afterward.. but still! I'm ready for the weather to cooperate with the calendar.

So lovely to hear from you Zuzana! I've missed blogging, but a break has been necessary--Yes, I see both sides of divorce. What you said is so true! Betrayal hurts so much, but when there is infidelity, domestic abuse--it is necessary. I know that things will work out for the better for my son.
Well, here I've been complaining about our cold, drizzly weather here while you are living in a truly frigid world! I reminded my husband today "March should end as a lamb" --Oh, I do hope so, for I miss puttering in the garden and soaking up the sunshine!
V

Oh, but such beautiful photographs, Zuzana!
We are getting snow this weekend as well. MUCH needed snow, as they say Colorado is in for yet another drought year. So - I cheer the snow on.
Hope you have a lovely, cozy weekend!
Hugs,
Zuzu

Aaahhh indeed Spring will not be denied!! And how I praise God for that! Spring fever has never felt so hot than this year it seems! But soon, very soon, we will all be singing summery tunes and posting springy pictures! Blessings to you and yours my friend! :)

we are to get 5-10 inches of snow on Sunday! Winter is not finished! ha.

Yeah, it is a funny old start to the new year, Two steps forward and then one back ...

That was a nice welcome to the Spring, Zuzana!

zuzana - i'm looking at very similar scenes outside my window right now - we've just had over a foot of snow in the midwestern us!! (so atypical for march). can't tell if that's an apple in that foto, but agree that - underneath all that white - the earth is warming and soon we'll see that altered daylight you speak of.

I'm so happy the days are getting longer. I'm looking forward to the warmth of the sun again.

I really hope that Spring will be there for you soon.
We have had a dry, hot summer that just keeps going, so maybe that might be a good sign for you there.
You will be keen to get out in your garden.

Hope you are having a lovely week
hugs
Carolyn

Wonderful shots from the season.

Spring is fighting a long battle with Winter, to be sure! Thanks for saying it so well.

Hi Sweet friend! I have thought about you so much...since I've found my true love. You were right all along...it just happened. And it is magical, easy, enjoyable, fun and OH so delicious!
Hope all is well with you!

It's been a really cold winter here too! Probably nothing like what you've experienced though. A week ago, we had snow. And today, it's actually really warm out.

Mother Nature can be so funny sometimes!