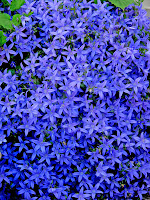 Seven years ago I purchased two plants and planted them together in the same pot. Being still the very inexperienced gardener then, I experimented myself to knowledge and made a few mistakes along the way - as to be expected.

One of the plants completely vanished in the end of the summer, the other kept on going all the way until the first frost in late November. I knew both were perennials, as it said so on the little tags that accompanied the plants. Thus I just let the survivor stand outside during winter, hoping for the best, yet watching it sadly as it slowly dried out, to eventually burn away by subzero temperatures, perishing into only a bundle of yellow stalks. And I said to myself - 'well this was another bad mistake I wont repeat again'.

In the spring the following year, as I was getting ready to toss the seemingly dead plant out, I saw small buds and green shoots appearing here and there, signifying new life. My heart skipped a beat as I became overcome with joy. Trimming away way the perished parts, I watched the plant grow and flourish, blooming with beautiful violet blue star-like flowers during the whole summer.
This continued year after year and I kept wondering how this incredibly resilient flower can come back after tough conditions, such as a few arctic winters with months of deep freeze, renewing itself annually with will and determination in the same pot, with no new soil added ever to nurture its growth...

I must admit that I do use a mild fertilizer during the summer watering, yet it is still astounding that this plant can keep growing stronger as time progresses. I never knew its name and finally now after endless and tedious research I realize it was called campanula (birch hybrid). I simply had to know, as this summer season the plant is the most stunning to date. I have never seen it flowering this magnificently - it truly thrives in our new home.

Covered fully and completely by amethyst coloured stars, it reinforces my belief in the miracle of nature and in the endless beauty of plant life.

It is beautiful, and it reminds me of one of my favorite quotes. "That which does not kill us makes us stronger". by Friedrich Nietzsche

A very beautiful plant. I'm so glad that it not only survived but flourished.

I think it's one of nature's little miracles. Your plant is beautiful and I could imagine your happiness when you saw these tiny buds after a harsh winter.
Happy to read you again Zuzana. I hope you are well my friend.
Take care. Marie

This is truly heavenly experience and has a lesson for us humans too:) When the going gets tough, the tough get going...

oh wow...it has come back and is flourishing....and i love the reminders nature gives us on not giving up...it is beautiful and a survivor..

hope you are having a wonderful week zu

Beautiful plants! Life is surprising in how it comes back sometimes.

you might find it seeds itself now. I have baby plants in cracks in the walls and steps. I love the blue stars.

Wow Zuzana, that must be a warming sight in person. We love the colors of spring and summer.

What a stunning color! I have no green thumb either but I've learned not to pull out what I thought were dead plants - but rather to wait to see if they come back the next season. I've had several that have - they must have had deep roots.

If nature is so resilient, we must be too. Lovely plant Zuzana. Really beautiful.

Hi Zuzane I have been lived a bad time living with people I hate,but I did it and I feel stronger...Wolud you like to exchange with me some seeds for our pots ?If you like I will be glad to share it !

It's very beautiful and plants know when you love them :)

I just discovered campanula this summer too! I haven't bought one yet, but I will, cos it's my ideal plant, tough and beautiful!
Your pictures are gorgeous Zuzana, and I agree with you re the miracle of nature and the beauty of plant life.
Enjoy your weekend!

The miracle of nature never ceases to amaze... perennial plants really do live up to their name. I have only recently discovered the joys of perennial planting as my garden was always a mixture of shrubs, annuals and bulbs.

Have a lovely weekend my friend.

Such an inspiring story of rebirth. The purple is amazing!

Purple is one of my favorite colors, so I love this plant!

I hope you enjoyed your mini-vacation!

Wow.. it blooms so profusely. The colour is beautiful. Clearly, it's happy with its new location.. and the people who share its space.

Good for you and your plant! That's a wonderful surprise. A pretty teacher, that plant.

Beautiful garden. You are a wonderful gardener.

Gorgeous!!! The lesson is...never give up...
Hope all is well with you pretty lady!

Such a lovely plant!

And how like us in its resilience and beauty.