During the summer months in Scandinavia, a very peculiar phenomenon can be observed at times in the night sky. If the conditions are right, the twilight heavens are illuminated by light, shining clouds. Such was the occasion this past week. As I was getting ready to turn in for the night, closing the living room window, a sight of pearlescence in the sky - resembling platinum glowing waves - greeted me.

Called Noctilucent Clouds, these consist of ice crystals and are the highest known clouds in the atmosphere. Positioned in the mesosphere at altitudes of around 76 to 85 kilometers - literally at the edge of space - they are not fully understood and are a recently discovered meteorological phenomenon; there is no evidence that they were observed before 1885.

Noctilucent clouds can be seen by observers at a latitude of 50 to 65 degrees and seldom at lower latitudes. Occurring during summer, from mid-May to mid-August in the northern hemisphere and between mid-November and mid-February in the southern hemisphere, they are very faint and tenuous, and can only be spotted in twilight at sunrise or sunset in the north cardinal direction. At this time the clouds of the lower atmosphere are in shadow and the noctilucent clouds are illuminated by the sun.

This was my second sighting, much better then the one I observed last June, particularly as the position of the clouds occurred in my immediate view to the north-northwest, on the still sunset coloured night sky.

To those who found this subject intriguing; please visit this audio slideshow on BBC page.

(Please click the image below for a larger view) 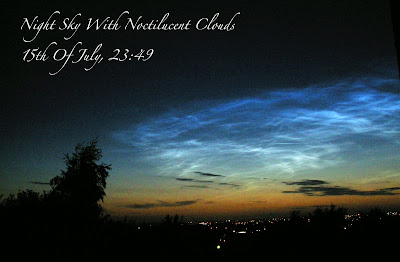 I know nothing of them, but then I'm at the 44th parallel.

I moved here from the 31st parallel and was struck both by how long the days are in summer (here) and how short they are in winter. I find those short days terribly depressing, yet all of Europe north of Bucharest, Romania, is above the 44th latitude. I don't know how you all stand it.

Wow. I have yet to see noctilucent clouds myself and am unlikely to do so in my current location. What an amazing sight.

Another wonder from wonderful Zuzana. I never knew of this phenomenon until now. It's brilliant. How blessed you are to view wonderful sights as these. I am intrigued as I like reading about clouds and watching them.

Have a blissful remainder of the week dear Zuzana.

Oh I would love to see this myself, how wonderful. I have learned a new word too "Noctilucent" thankyou for sharing your beautiful sky.

Zuzana, you're educating me at each visit.
This is fascinating stuff, and your pictures are beautiful. It must be incredible to witness this with your eyes. What a beautiful place you live in.
Thanks for the BBC link, i'll head over there and learn some more.

Interesting! I had never heard of these... Thanks for the introduction (great picture, as usual)!
Headed off to read more about them.

these are gorgeous...have never seen them myself but would surely love to. hope you are well my friend.

You truly are a scientist Zuzana and you have an immense knowledge of the world around you. I often see unusual things but fail to explore further while your inquisitive nature brings you on a expedition of discovery. Well done, great post, the BBC audio visual is super.

I just saw an article on this phenomenon from a news source on-line and here you are sharing your experience with us. I always learn from your posts Zuzana! Lovely photo!

Gorgeous! What a treat it must be to see this!

Happy day to you, Zuzana!

I have read about Noctilucent clouds but never seen them. Great pictures. I am glad you had an opportunity to witness something this beautiful.
Hope you're having an awesome day!:)

How beautiful! I, too, have read about them but of course never seen them in person.

Thank you for sharing it with us!

Beautiful! First picture looks like a huge rainbow. I was interested - and went on to do a little research :-) - about latitudes. Guatemala is around latitude 15, so no chance of witness those beautiful summer phenomena. You are so lucky! Please keep sharing this unseen and rare happenings with the rest of us.
Have a great day!

Clouds so high they have ice crystals...wow..I never knew there was such a thing. The photo is just wonderful!

I've never heard of this fascinating phenomenon. Thanks for introducing me to it. This night sky must be beautiful in person. You photos are amazing. I'm glad you have a camera that is able to catch this type of detail.

No clouds for us these sunny day!! Hugs.

You have amazing skies over there, both in summer and winter!
Dan
-x-

It must be a wonder to see in person!
It seems that there's much more to see in Northern skies anyways:)

Oh WOW! They look downright spectral, don't they? It gives me goosebumps just to see this, and is a reminder that there are still mysteries in the world that are as yet untouched by science. :)

I don't think I've ever seen one in person, they look absolutely captivating! I really need to look up in the sky much more often and see what I've been missing.

That's an incredibly beautiful sky. Thanks for the story behind that beauty!

Love the images! Wow. I am a fan of clouds and I have never seen anything like these.
Kat

I love learning about this! Glorious heavenlies!

Beautiful shot. Good to know about this unique phenomenon.

Fascinating. I have never heard of these, and now I want to go watch the BBC clip you posted. Thanks again for an educational post, Z! xo

Snowbrush, Tom, Susan, Mel, Kath, Mimi, Alesa, Brian, Blogaire, Sandy, Zuzu, Mr. Stupid, Jacki, Claudia, Betsy, Stevie, Michael, Phillip, Dan, jeannette, Tony, sprinkles, Sandy, Kat, V or C, Rajesh and sallymandy – such kind words; glad to hear that you all find these illuminated clouds in the night sky intriguing. They are indeed a sight to behold and these images simply do not do the reality justice.

Thank you for your lovely comments and for finding the time to always stop by; I appreciate this immensely.

Wow... I really would like to go norther to see such meteor... My halos and other rainbows seems so tacky after that... ^^'

A beautiful phenomenon - those clouds make me wanna make paint them but that would do them great injustice!!

Wow.. that's incredibly beautiful! I've never heard of it before either. I learn so much at your beatiful blog, my friend.

What a gorgeous sight to have seen. Stunning skies indeed!

How interesting! These clouds complement your northern lights.

So incredibly interesting and lovely!!

That was educative, great pics too.
Congrats on your well deserved POTW from Hilary!

Tsuki, Keats, Hilary, ladyfi, Paul, Betty and Indrani (welcome); thank you all for taking the time to stop by; your lovely words mean so much to me.;))
xoxo
Zuzana

What a beautiful photograph, Zuzana. Thanks for such a great explanation. Fascinating. I watched the video and was completely mesmerized. You truly earned Hilary's POTW designation!