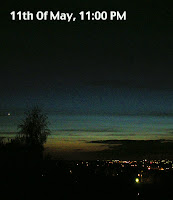 Last week marked the beginning of the Scandinavian White Nights. These are the short nights of the North. A magical time, when the daylight reigns and sun sets late at night.

White Nights, also called Light Nights, last officially in my part of the world from the 5th of May to the 7th of August (5/5-7/8). This is the most beautiful part of the year, peaking in the early summer, when sun sets for hours and never really disappears, only to turn into sunrise on the other side of midnight.
Some of you might recall my short series of images which I shared last year, documenting this enticing phenomenon in yet another installment of my progressive photography.
The culmination of this time of twilight occurs on Midsummer Night at the end of June; thus the countdown to this enchanted night has begun.

Below a collection of April and May sunsets, as seen from my windows. It might be of interest to note the visible difference of the position of the setting sun on the top left and the bottom right picture; the pictures are taken only ten days apart. 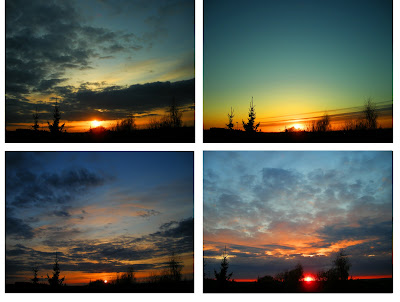 My God! Zuzana. How lovely to be able to view this aspect of nature. I so want to experience it and I am happy that your pictures will enable me to see it.

Thanks Zuzana for this.

It seems somewhat far off--midsummer's eve--at this point, but my daughter is surely counting down until that magical date. It's the last day of school for her. :-)

yeah, id like to see this...i guess i do get to through your lens, smiles.

I would love to experience this a few times.

You enjoy a wonderful vista, and your shots are amazing; it's not easy taking good sunset photos. Thanks for the perspective on Light Nights.

So gorgeous! I didn't realize that the White Nights lasted 3 months! For some reason I was thinking a few weeks, but it makes perfect sense...as long as an annual season, isn't it!

How beautiful to be able to have such long hours of sun in the sky.. particularly low on the horizon like that. Our last streaks of light can still be seen in the otherwise dark sky at around 9 pm these days. That will improve by about an hour by the time June 21 comes about. I LOVE summer and I LOVE your progressive photography. :)

I'm always saying there's not enough hours in the day......this would be perfect for me. lol
It must be something special to witness this. I'd be so tired; I wouldn't want to sleep in case I missed something.

Those pictures are breathtaking!

Beautiful photography as usual, Zuzana. I now I've said this before, but it's always a pleasure to catch some chillout time on your blog. :j

I had no idea that this lasted for 3 months! What glorious, beautiful skies! Thanks for sharing your photos. They are fabulous!

Beautiful! Especially seeing how the sun is moving across the horizon as the days progress.

Living in central Alaska, I found the white nights disturbing to a degree, because I have a hard time sleeping when the sun doesn't really go down. It was also, as you say, enchanting. The birds would tweet all night long.

Isn't there a festival for the Midsummer Night? I've always thought it would be fun to be a part of that.

Gorgeous photos. You must really look forward to this time of year.

It's still chilly and raining here. Not a very nice week, weatherwise.

Zuzana,
You live in such an interesting part of the world that others do not have the opportunity to enjoy. This land of the midnight sun is so beautiful and YOU are so kind to share it with us!! I hope you have a fun weekend! :) The Bach

what a fabulous time that must be! so incredible to be able to witness and experience the fabulous shows of mother nature - and how wonderful of you to share with us - being so close to the atlantic, the sunsets here are magnificent - but oh, the glory of the midnight sun!!!

this must be so fun to experience. Midnight Sun! something we will never see here. beautiful images.

This is the part of year where Mother Nature makes up to you for the cold snowy winter. Enjoy it. I remember when we lived in the UK the summer nights were short too. Ours are shorter, but not that extreme. It will be nice to drive to and from work in daylight though.
Have a great weekend,
Kat

Wow...those photos are breathtaking.
Happy Weekend to you Zuzana!

I really love this time of the year here in Norway...I wanna have a beautiful pictures too, as u have!
Hug for you Zuzana!

These pictures are all so wonderful. Happy Sunday!:)

Fabulous shots Zuzana, especially the one on the bottom right :0)

Zuzana Dear.
you Are So Lucky.You Live In A Magical Part Of The World.x

Susan, Tina, Brian, Realliveman, Paul, Betsy, Hilary, holdingmoments (welcome), sprinkles, Alesa, C or V, Rajesh, sallymandy, The Bach, Kat, Gypsy, Doreen, Kat, Jill, Kata, Mr. Stupid, Eternally and Tony; thank you all for your kind compliments on my sunset photography. Still, I only documented what was taking place around me.
I am happy you enjoyed the short information about our *Light Nights*;, indeed they are the nights of magic.

Always so happy when you stop by,

Dear Jean, thank you; even though my knowledge of French is limited I take it you like my sunsets and I appreciate the visit.;)xo

he said:
"These pictures are marvelous! They're like W. Turner's paintings."

Ah, thank you so much Alesa!;) Proficient in English and French, I can see;) xo

I live in a french speaking country so... no credit there. : j

These sure are gorgeous photos. Just amazing, Zuzana.

Thank you so much dear Sandy.;) xo