Or "Lost In Translation".

I decided to participate in Theme Thursdays this week as I just could not miss the opportunity to share a fun story about a sign.

Posted in an article on the BBC news site, it tells an amusing incident with a road sign that was standing near a supermarket in Swansea, printed in both English and Welsh.

The sign was comissioned by the Swansea Council, that sent an email to its in-house translations service to have this road sign translated into Welsh:

"No entry for heavy goods vehicles. Residential site only."

However, the Welsh translator wasn't in his office at the time, thus an automated "out of office" mail response was sent back to council officials. They were under the impression though that what they recieved was indeed the needed translation, when in fact it stated:

"I am not in the office at the moment. Send any work to be translated."

Unaware of the real meaning of the message, authorities had it printed on the road sign under the English text. The sign was removed as soon as the official became aware of the mistake; however not before a few pictures were taken and news stories were written. 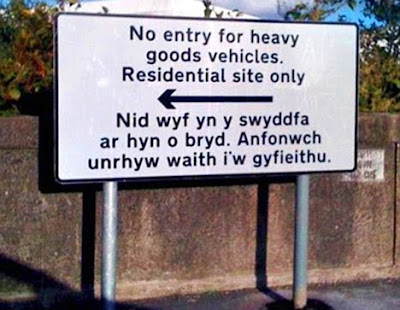 Have a great day.

Wonderful story! I think they should have left it as it was. It would put a smile on every Welsh-speaking Swansean's (? ;-) ) face, and they could laugh secretly at all the clueless only-English-speakers! :-O

I remember when this happened Zuzana - so funny - it was on the morning news! Very embarrassing for the officials in question. Some people were upset about it understandably; the Welsh are justly proud of their wonderful ancient language, but thankfully we all share a great sense of humour and saw the funny side of it all!

Have a lovely day.
Jeanne xx

hahaha. so glad you joined us for TT today...funny tale, cant believe it made it all the way to being put up and no one noticed...

That was so funny. Lost in Translation indeed! We have loads of such things in India.

Shall send something like that to you when I spot one!!!!

That is so funny! I wonder what they did with the misprinted sign. They could have sold it on ebay for a hefty sum. Great take on Theme Thursday : )

That is so funny. Government makes the silliest mistakes.

Its laugh out loud funny:)))) And like What Susan has said, we have a lot of those here in India...

Such a funny story!
Thanks for sharing it, Zuzana!
You gave me a good morning chuckle.
Nice to start my day that way!

And I hope you have a wonderful day full of smiles and joy!

Classic!! And, reason #5000 that you should always have someone proof read your work!!
Have a great day!

I visit many foreign (to me) blogs, and trust that Google Translate does a good job. As I hit the 'Publish Comment' button, my fingers are crossed that the translation shares what I meant it to! :)

Hugs from across the pond,
Zuzu

The funny mistakes of life...probably not as funny to the one in charge of the project though :-) I have a friend precisely in Swansea! :-o I'm sure I'll get her input sometime.
have a lovely day!
*hugs*

Zuzana: This is a fantastic post! I'm so glad you joined us for Theme Thursday!

Hilarious. Shakespeare said it nicely, "There's many a slip twixt cup and lip."

that is so funny...I love signs with ambiguous grammar...they always make me chuckle.

I missed you yesterday, glad you're back!

That sign is pretty hilarious! Thanks for the laugh. There is a website that I used to visit occasionally that has Lost In Translation type things. I haven't gone there in a long time and can't even remember the name of it.

Makes me laugh very early in the morning.Thanks for brightening my day. I have a similar story to tell you. In Sarawak it is the policy to name streets or roads after famous or well-known personalities who have passed away. Therefore we have a lot of streets and roads with no signs or names all over the land because there are too few dead good people around!!:)))

Hi Zuzana
Great post! I've sent a link to one of the ladies at work who is refreshing her Welsh at the moment.
Best wishes
Dan

I hope you are having a WONDERFUL week. ;)

I'm so glad you joined in! Yes, this post is perfect for today's theme! I do agree with Steviewren that Chinese restaurants/menus are perfect for the lost in translation examples!

That is hilarous!! Thank you for sharing.

Zuzana,
This is too funny! Thanks for sharing the translation. I can't believe somebody didn't notice before it went to production.. hee hee.. :) The Bach

Wonderful!
This is really funny.

I love laughing at "lost in translation" signs....some are pretty darn funny!

Have a great weekend...

Yes indeed, it is amusing the mistake we can make and the best is to see it with amusement as an honest mistake than anything else.
Thank you all so much for your visits, your kind comments make me smile in return.

What a funny story! Guess the translator should have left a translation of his "out of office" message on the recording too.

Hilarious, then only the Welsh would know the difference and well, we all know they don't really matter. (Relax, I'm Welsh!)

Fun story about the wrongly translated sign! I love these sorts of things(I'll have to follow your link, too)

I always wonder..."how on earth does one pronounce those Welsh words?", whenever I see it written. ;-)

Patti (welcome), Baino (welcome) and Tina; thank you for your great comments, glad you enjoyed this "Lost in translation" story.;)
xo

Too, too funny!!! Congrats on your POTW
Hugs
SueAnn

Oh my goodness, that's hilarious! Also, that's easily the best theme post I've seen in ages. What a delightful laugh you've given me.

Last week, my son and I were headed to our local Target -- as his socks were in shocking condition, truly, you'd think at nineteen he'd at least be able to be in charge of his feet, but no -- and as we were driving in we saw a speed limit sign that listed the speed limit as 17 mph ...which is a weird and arbitrary number...then as we got closer to the store, we saw another listing the speed as 12 1/2 milles per hour.

So clearly Target was having a bit of fun, but the funniest sign we saw that day was actually the bumper sticker on the Jeep next to us as we parked:

It depicted, with the use of stick figures, a family unit. Mom, Dad, what appeared to be two little girls and a son, as well as two dogs. But the stick figure of the dad was far to the left, with one of the crudely drawn dogs pointed in his direction, seemingly barking at the Dad stick figure as he stood apart from the family.

And the Dad stick figure had a large, Red X over him.

My son and I nearly fell down laughing in the parking lot. Whatever daddy did to get himself shown the door in that family, it was bad enough that mom evidently felt the need to advertise it to the entire world!

We called it the, "Daddy ran away with his administrative assistant." bumper sticker.

Congrats on POTW mention from Hilary

Congratulations on the POTW mention. Funny the things that happen when translating one language to another!

Congrats on POTD mention at Hilary's.
Well deserved- this is v. v. funny!

Hilarious. Well, as the great JFK once said: I am a jelly doughnut! Congratulations on the potw and thanks for the laugh.

Nancy, slomler, Land Of Shimp, Daryl, TSannie, Mimi, Cricket and Daine - thank you all for stopping by prompted by Hilary's nomination. I truly appreciate your time an kind words,
xo
Zuzana

You would have thought that the speed with which the "translation" came through would be the first clue that something was up. There can't be many translation agencies out there are that'll get the text back to you in a matter of seconds.

Bit of a comedy of errors, to be sure.