Nature never stops surprising me. What a difference two days can make. As we begin a new month and the first month of spring, I am very happy to announce that when I looked out of my bedroom window yesterday, the large icicle that used to hang there for almost three months was gone.
As if by magic, over night it disappeared. The landscape was foggy and when I opened the window, the sound of dripping and running water could be heard.

This was our first thaw.
It arrived unexpectedly and lasted two days, bringing the first plus degrees of the year - and actually even the first rain since early December. I never remember welcoming rain with such a joy.
It caused some snow to vanish, turning into a brown slush. Most of it is still around though, as the ground is still frozen and it will take more than a couple of days of thaw to make it disappear all together.

I decided to look for spring signs on the few, small uncovered areas around my house. My heart literally skipped a beat when I did find signs of life.
Just next to the house, on a small grassy area below the bushes lining my terrace, a tiny flower was almost in bloom. It is the first early flower to bloom in Scandinavia (besides Snowdrop) and it is called Eranthis. It is yellow, cup-shaped and appears so fragile, yet this is an incredibly resilient plant, so significant of the early spring in my part of the world.
Even the stalks of Crocuses were clearly visible in the vicinity and on my back terrace, on a shielded area under a window, Daffodil stalks were shooting through the ground.
And finally, the long, brown, lonely branches of my Caprifolium (Honeysuckle) displayed visible buds.

I can not describe in words the joy that I felt gazing at these small miracles of nature. It felt as if it was trying to comfort us, telling us that winter will eventually end. Even though the weather has now turned for the worst again, with threat of snow in the air and the temperature has dipped below freezing, this clearly was the first unmistakable sign signifying that spring is imminent. 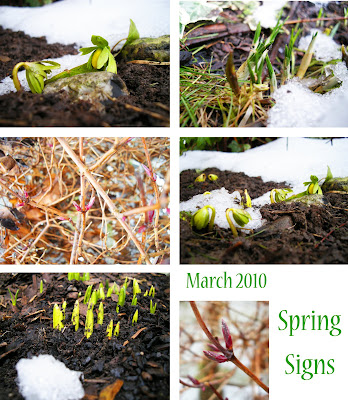 Just like you, we were over the moon over the fact that the temperature was above freezing point and that it rained. I even biked to the shops, joepie.
This morning we woke up and another white blanket was spread out. So while walking to school we just reminiced about the summer sun.

Have a lovely start of your week.

It must be the one time you are excited to be woken by the sound of dripping!

Look at your wonderful shoots and buds! This is why I love spring so much and look forward to it with so much impatience!

You must be relieved to see the back of that lethal icicle Zuzana - I really hope the thaw continues.

We have a bright sunny day here as well!

Have a lovely start to your week.

Oh, Spring will be so welcome this year!

here where I live, the only sign of spring so far is sunshine which wakes me up since few days, and a freshness in the air. but Im afraid for real spring we will be waiting till end of March;/

nice. guess this means batcat can move out of the window. smiles. i do hope it is here to stay soon. hear we may have one more big one on the way...

Oh, that makes me so happy for you! I love that nature is SO very faithful and that under all that snow, there are signs of Spring just waiting to be sprung.
Inspiration from you this morning--thank you, as always!

WOW! Feelin' your joy! I just KNOW spring is almost here...I can FEEL it!
HAPPY MARCH!

It never ceases to amaze us, the fact that those shoots DO come up, after all that cold and even if they have been covered by a foot of snow and ice!
I, too, discovered some green shoots in my back garden yesterday and I have that "we are almost out of this" feeling now. Even if it snows once(or twice..or more), I know we are near the end.

What a great posts, and I'm pleased you have found such lovely signs of spring. I sometimes wonder if nature knows when February turns to March, as buds and flowers seems to appear overnight! My beautiful crimson hellebore is still stubbornly refusing to unwrap its petals though!
best wishes
Dan
-x-

So lovely for you. I remember now the drip dripping of the water as it thaws. I've never heard it like that before. I hope the thaw continues for you.

Congratulations and Happy Spring to you.

I can only imagine the great feeling of seeing some color other than white and grey on the groud! Nature is awesome indeed, and will never cease to amaze us.
Have a great day!
*hugs*

How very lovely to see those beautiful signs of spring!
Loved the pictures!
Thank you for sharing them!
I share in your joy, Zuzana.

Wishing you a wonderful day full of much joy!

How exciting! It won't be long now. We haven't had any green sprouts yet, but hopefully will soon. Happy first day of March!

Your picture of the flower bud and the stalks are a welcome sight. The forecast here is for snow flurries tonight.

Oh, wow! Imagine that - there is an end to this! I hope that terrible storm that has killed people in France doesn't hit you.

Loved reading through your post .. could fee lthe excitement...
But are you a bit sad that the joy of waiting for the spring to come is over .... or did you have a strong enough attachemnt with that icicle that you will miss it.....
these strange questions popped into my mind...
Congratulations.. enjoy the spring

What beautiful signs of spring, Zuzana! I know just how you feel seeing those little shoots and flowers.
Our weather has been on and off...warm for a few days and then cold. Tomorrow a chance of snow and freezing rain. Ugh.
Enjoy!
Hugs,
Donna

Well that explains why you didn't post yesterday, you were too busy enjoying the big thaw! :) Good for you!

I have to run some errands this afternoon and when I come back, I'm going to wander around to see if I can can see any green signs of life! If there are sprouts there, there HAS to be some here!

I am happy for you, Zuzana!
Hugs,
Zuzu

What a beautiful post, Zuzana! I felt all warm just reading it. A beautiful sunny day here today. You could almost feel spring in the air, but it'll be a while yet for us. I love snowdrops!

I could hear the trickling of the water and the THUNK as the big icicle let go and fell to the ground to melt and replenish the earth and your blooming yellow flower, which looks like the aconite in my garden.

I've tagged you for a Photo Tag. Please stop by my blog for details!

Isn't new growth soooo exciting. I love it on my plants. Hopefully, the thaw will continue and we'll have an early Spring. March did come in like a lamb here in Indiana
Have a great day tomorrow!
:) The Bach

Beautiful shots. After seeing snow for long your wish has finally come true. Happy spring to you.

I can remember your first posting about the gloom of winter and now spring is at your doorstep. I guess this one wasn't so bad after all.

Such good, welcome news! I cannot even begin to imagine such a deep freeze! Spring is so lovely and will be welcomed by many especially this year!

Ahhh beginnings...buddings, birthings...not green here yet, just the pine trees, but I saw a chipmunk yesterday (and so did one of our kitties) from our window...surely spring is a breath away.

So pretty. Lucky you. i searched my grounds and nothing has popped through yet.

Elizabeth, Kath, Jeanne, Shrinky, maja, Brian, Eternally Distracted, Julie, Betsy, Jill, Tina, Dan, Lynne, Susan, Claudia, Margie, LadyCat, Stevie, Keera, Sumandebray, Donna, sprinkles, Zuzu, BPG, Sharon, The Bach, Rajesh, Scribe816, C&V, Laura and Nessa, thank you so much for your kind, positive comments.! This year most of us experienced very cold and very snowy winter and are looking forward to spring like never before.
As most of you reinforce here - nature is a miracle maker.

Thank you everyone for your very kind comments and visits that always make me smile.

Yay -I'm happy for you! Finally the end of the tunnel!