The Dark side of the Moon. 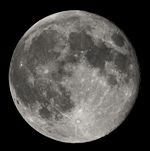 The moon mesmerizes me. My sun sign is "cancer" and according to astrology books, I am suppose to be influenced by this celestial object. And the gem of my sign is the moonstone.  Already as a little girl I used to gaze at the white disk in the night sky until I fell asleep under its magical, cool glow. As an adult I became more intrigued by the existence of "The Dark side of the Moon". No, I am not talking about the Pink Floyd album. Well, the term is incorrect, although it is frequently used to describe what is called as "The Far side of the Moon". It is actually the other lunar hemisphere, which is never fully seen from the Earth. It was photographed first by a Russian space probe in 1959 and was later observed by astronauts aboard the Apollo 8, which orbited the moon in 1968. Interestingly, the far side looks quiet differently from "The Near side" we recognize. While the lunar image we are familiar with is full of white "deserts" and dark "seas", the other is smooth and almost entirely void of the dark areas. The moon, or rather its origin, is still an enigma. There are at least three different theories explaining its formation. The prevailing one is based on the theory of an impact between Earth and a small celestial body, causing a piece of the Earth being torn away and thrown into its orbit. Apart from all the scientific facts, the moon is source of enthrallment that has allured mankind for millennia and likely will do so until the end of time.
Posted by Zuzana at Thursday, September 04, 2008

Mmmmm! I love the moon in the way it representst the female, in its waxing and waning, for its wonderful colour and for its friendly face in the sky. Whenever I am far from a beloved one and I look up at the moon, I think "He's looking at the same moon." I never think that about the sun for some reason.

Did you ever see "Kaos", the film by the Taviani brothers? It was made in 1984 and one of the segments was called "Mal di Luna", about the lifelong effect of the moon on a man. It's a wonderful film.

I'm so enjoying your blog!

Thank you for stopping by G!:) And for all the lovely comments and compliments. I have not seen the movie but will for sure look for it now.:)