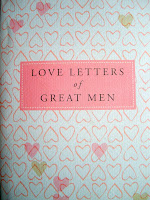 Love, that foolish, yet transcending emotion, that makes us feel invincible and so endlessly fragile, simultaneously.

Love is such a universal feeling, one that connects us all, as we are all familiar with its bittersweet allure, one that leaves us with the sense of flight as well as fall...

This powerful emotion has been described so many times, in so many ways, with enticing words on paper, creating unforgettable works of art.
I am sure I speak for many of us, when I claim to posses at least one manifestation of emotions, written by a lovers hand in a letter, to be forever immortalized and revisited by the eyes they were meant for.

Not long ago, I stumbled upon a delightful little collection of love letters at a flea market. They are bound into a book, entitled "Love Letters Of Great Men", compiled by Ursula Doyle. Almost every evening, I get lost in a sea of affection, as expressed by great minds of the past, reading through the candid lines of their desire, learning about their inner most emotions of often unrequited love, aimed at Ladies that won their hearts. 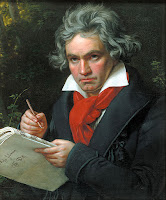 The ones that captured my senses more than any other are letters by Ludwig Van Beethoven, the talented composer, written to his "Immortal Beloved". Three such passionate letters were found after his death and the identity of the recipient was never conclusively established. This adds greatly to the uncanny enchantment that envelops every reader of the emotionally charged sentences, as the passion is so very palpable in every word...

Excerpts from "To Immortal Beloved, Good Morning, on 7 July"

O God, why must one go away from what one loves so... You made me the happiest and unhappiest at the same time.

What longing in tears for you - You - my Life - my All - farewell. Oh, go on loving me - never doubt the faithfullest heart
Of your beloved
L
Ever Thine
Ever Mine
Ever Ours. 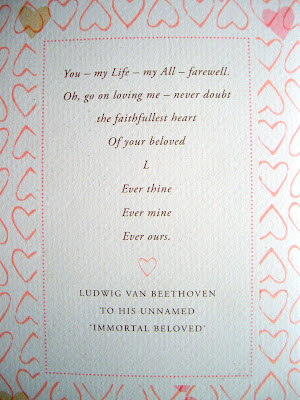 Note: I was not the only one enthralled by the passion hidden within the love letters. Indeed, Bernard Rose directed a film entitled "Immortal Beloved" in the 90's. Filmed in Prague and in the Czech country side, it is deliciously melancholic, as the plot circles around the pursuit of unveiling the identity of the secret love of Beethoven... A beautiful piece of cinematography in vision and sound, highly recommended for all the fellow hopeless romantics out there...

Love and its hues never fail to amaze me. I always say to my friends: "I have never been out of love. The times when I was not in love, I was quite restless." Lol.

Zuzana, what treasures you dig and reveal to us in your blog! Thanks for sharing this lovely episode from a musician whom I love and cherish.

Oh, I must see this movie. Not only Beethoven's music speaks to me, but also his life - still composing when he became deaf. Overcoming such odds!

this sounds like an incredible book...must look to see if i can find it...us hopeful romatics probably keep it in publication...smiles.

People don't write letters like that anymore, or do they?
What a great little find--your book of love letters, Zuzana. I have a few books with collections of letters(letters from American women, letters between mothers and daughters, etc.)and find them fascinating and moving to read.

That was a good movie, I might have to watch it again. Email is great for keeping in touch, but not so much for long romantic letters. My sweet Husband still sends snail mail once in a while, or leaves me notes around the house, just so there is something tangible. Hope your Irishman does too.
Kat

Hey there. I always enjoy your posts so much. Thanks for your comment on my last blog post. It was great hearing from you. I hope all is well with you. I'm looking for a new job, plus I'm thinking about going back to college. Take care. Have a wonderful week ahead!

I don't know if I'm a romantic. Maybe. But I do know that I try not to be. You know story in that department (non existent!) and hence I try to stay away from the overly romantic things. I like the romantic "comedies", where humor and happy endings are the inevitable ending. Probably not always the case, but maybe that's why I like them, and imagine it can too happen to me one day. *sigh*
have a great day!!

Great stuff. Love has no boundaries.

How lovely. I have just 3 love letters from my Irishman and they are very precious.

i love that movie. the whole story is so passionate.

I've only felt fleeting moments of love in my life. I try to avoid these kinds of books or movies as they just remind me that I'm alone. But I do like to think that true love exists. I just think it doesn't exist for me.

Oh, the passion and romance in those words. What beautiful insights into these men. Thanks for the excerpt.

What a wonderful treasure to have found at the flea market. I have NOT seen this movie...I have added it to my list of movies to watch as cold weather comes to us!
Thanks Zuzana.

Such romance and mystery which surrounds his words.. lovely.

Zuzana,
You found a treasure for sure. I have the cd movie and it is one of my favs. Have a great day!
:) The Bach

Love, the eternal topic. Interesting that you happened (?) to choose Beethoven, whom most people would consider a "serious" and dark composer, but absolutely passionate!

People used to be able to express themselves so beautifully. Sometimes I wonder if we will forget the art of written communication completely in the coming years.

I never knew that about Beethoven! How very interesting! And the lovely lady never got to receive them? sad.

Guess this waterfalls location!!!
Style while roaming in Manori Beach

Sometimes the 'foolish' transcending emotion, are the best! :)

Beautifully written post Zuzana - so apt for the subject matter.

I will look out for this film and what a treasure you found that day ...

After reading your post I simply must see this movie!! Artists and composers are such interesting people--Beethoven's music was so strong and passionate, why should I be surprised that it reflected his personal life! Thanks for a most interesting post!

Oh, this is incredibly beautiful!!! And now I must see the movie!!! You write such fabulous posts, dear Zuzana!! You have the heart not only of an artist, but also of a poet!! And I think the book of letters is a treasure!! Loved this!! ~Janine XO

Zuzana: Your site is so well written that it is no surprise at the sheer number of comments I see from wonderful readers. I Always enjoy my visit here and Beethoven's 7th with Bernstein (released in 1992) was my favorite!

Susan, jeannette, Brian, Tina, Philip, Kat, Keith, Claudia, Rajesh, Kath, Nessa, sprinkles, Sandy, Jill, Hilary, The Bach, swenglishexpat, Stevie, Betsy, Bhushavali, Tony, Jeanne, V or C, Janine and Michael – as a completely hopeless romantic, which I will stay till the end of my days, I am glad to have found many kindred spirits in so many of you, who enjoyed this post about the passion of one great man.

To those who feel that love has not knocked on the door yet, do not despair – in my experience it comes when you least expect it. Then do not hesitate and give yourself to it fully, no matter the outcome or how ever long it may or may not last…

Thank you all as always for your very kind words and visits.

Wonderful post. I'm going to have to find that movie. Beethoven's music has always moved my soul and I think the movie might too. Thanks for Sharing
Johnina :^A

I'm heading over to Amazon to search for this book...How utterly and beautifully romantic...

Johnina and Rebecca, so glad you too find enticement in the passion of a great composer. Thank you for stopping by,
xo