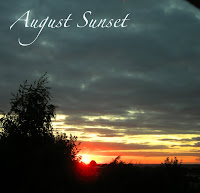 Sadly, the illumination of the Scandinavian summer night sky is ending. The 7th of August marks the last day of the so called Light Nights and in its turn the end of the most beautiful period in the annual cycle of the North.

From now on, our skies will grow darker by each passing day. Already, the night has stolen two hours away from the daylight and compared to June, our sunrises and sunsets occur one hour later. This shift will increase exponentially and before long - twilight will rule my world once more. 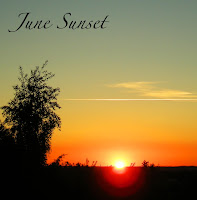 There is a certain melancholy that fills my heart as I make my peace with the notion, that summer is closing towards its end. Warm days will still follow for a few weeks more, but warm nights and evenings will begin to subside drastically. The sun is turning slowly golden and my surroundings grow dark green, as the seed-bearing parachutes of dandelions and thistles fill the air. The late summer sunsets are now traveling back from northwest towards the west, where the setting disc will soon meet this cardinal direction around the fall equinox.

This is the beginning of the end of my love affair with Mr. Summer. Every year, as we say farewell to White Nights, I know he is slowly preparing for his departure. 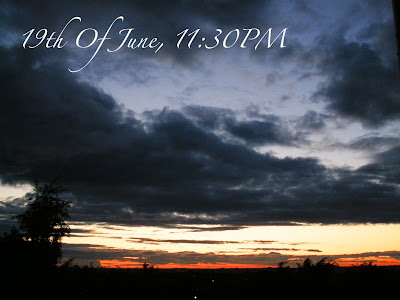 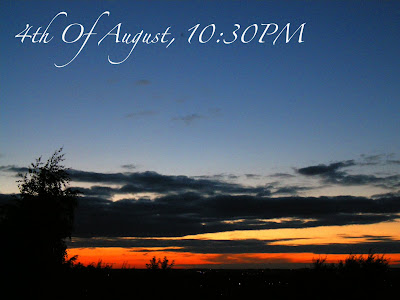 I know what you mean.

even though they looked more darker, but still beautiful on your shot, Zuzana!!
I love the August sunset!!

I peeked outside and was surprised to see that it is DARK here in Valdez, Alaska at 1:30 AM. I had become so use to the light nights I forgot what a dark night was like. And then I opened your post about your White Nights ending. Alaskans call it the Midnight Sun here.

sorry your love affair is ending...mine is about to begin with lady autumn, she is my favorite....smiles.

Like Brian, I am looking forward to autumn. It has been so hot this summer that cooler days and nights will be welcome.

As to the light going away, like you, that would make me melancholy as well. I love brightly lit days. They energize me.

I have a long mental list of chores I want to get done around the yard this fall. Just waiting on some cool breezes to get started.

Your loss is our gain, Zuzana.

I note the increased stretch of our daylight, only now because the cold continues,cold for us, by our standards.

Winter is still with us, but spring is on its way and I look forward to welcoming summer.

It's good that these things come and go in cycles. We get to take it in turns.

Beautiful pictures. I feel the sadness in your words. All I can do is wish you more beautiful twilight days! Cathy

Zuzana...you KNOW I am with you on this...I get a feeling of anxiety just thinking that our wonderful summer is coming to a close. I am going to revel in it for just a few more days...I love it so.

Oh wow... so it's a true "twilight" world that you'll soon be entering into then, Zuzana? I can't even begin to imagine what that must be like for most of the year 'round.

I feel the same way. The wildflowers are fading and signs of the end of summer are everywhere. Fall will be glorious, but Summer alwalys seems to leave much too soon!

But what a beautiful departure he makes. We could not see the recent night lights here... too far south I suppose. Glad I can enjoy it through your photos! They're lovely.

Gorgeous pictures! Love your thoughts about summer. I don't want to say goodbye either....

There is a sad inevitability about the turning of the seasons. This year spring seems to have only recently turned into summer, yet it's already on it's way out. Lovely photos.

Beautiful pictures. The difference in light is amazing.

Magnificent sunsets Zuzana. Our Summer is also drifting slowly away which is always a time tinged with a little sadness. But other gifts will be bestowed on our senses - like golden Autumn landscapes, warm fires to sit around, postcard-like snow covered lands ... and dreams of far off Summer days. C'est la vie!
Hope you are having a lovely weekend Zuzana. xx

Zuzanna,
I noticed with some sadness(almost alarm, actually!) how completely dark it already was shortly after 8:00 at night just a few days ago. The summer always flies by too quickly.

He is probably preparing to comeback. Sametime sameplace next year

He is probably preparing to comeback. Sametime sameplace next year

It certainly is a sign that summer is ending! I really hate it when we switch to Daylight Saving's Time and it becomes dark a whole hour earlier in just one day! It takes me a couple of months to reset my internal clock!

The sky photos are beautiful.

I always love your side by side comparison photos. Today's are a bit shocking, I wouldn't have beleived it if I hadn't seen it.

I'm sad that summer is ending. It's my favorite time of year. Fall is nice too but it brings cold weather which brings winter which I DESPISE. I'm going to miss summer!

beautiful post Zuzana!! love your writing. I hope summer sticks around here as long as possible. nights have been cooler a bit lately though. sorry I haven't been around much lately. life has been keeping sort of busy.

It's a different, enchanting, world!

Zuzana: It is fascinating to me how different parts of the world respond to nature's realm. Quite a dramatic shift from the U.S.A. right now. Summer is still on here. lol! :)

Mr.Summer Is Only Going On Holiday! He Will Be Back !

So true about waning summer. And, yet, there is a little more colour in the flowers, the garden needs a little less water. Good thing summer makes way to a gentle fall.

Beautiful photos, Zuzana. I don't like to say goodbye to summer either.

oh, yes, the drifting away of dear summer, always taking a little piece of my heart with it into the chilly autumn and frigid winter - here, too, one can see the difference in the setting sun daily - and a shifting of the moon in the night sky as well - as a true leo i am always more than a little melancholy to suffer the absence of my sun sister - thanks so much for coming by my place of late - i'm so sorry to have been absent a bit myself - it seems there has been one situation after another now that has taken me away from blogland and most recently a family medical situation - so please forgive my having been a bit remiss - it has been due only to lack of time and energy for anything above the absolute most necessary things here - but, light always comes at the end of the tunnel - so could not wait to come by and say hello! have a glorious remainder of your gorgeous day!

The change comes early for you folks. The skies are gorgeous. Thanks for sharing these thoughts and images.

Snowbrush, Nensa, Sandy, Brian, Stevie, Elizabeth, Cathy, Jill, Tony, Zuzu, Di, Betty, Marianne, Nessa, Blogaire, Tina, Sumandebray, Bessy, sprinkles, Doreen, Cosmo, Michael, tony, Paul, Donna, Gypsywoman and Sandy - yes indeed, summer is closing towards the end almost everywhere, except on the southern hemisphere. I envy you guys as the best time lies just ahead of you. Even though in my adult years I have started to appreciate the beauty of lady Autumn, Mister Summer is still my favorite season.;)

Thank you all for your kind visits and for your interesting and substantial comments.

Mister summer will go out, for some months, but Mister autum have lot of charms too. I'm sure he will seduce you too ;-) and you will share such beautiful pics of your romance with Mister autumn ;)
Lovely pics , and wonderful words.