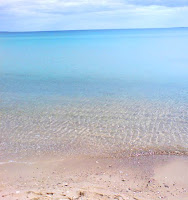 The 8th of June was in 2009 declared as the official World Oceans Day, even though it was proposed as such already in 1992. As this past Tuesday marked the first (official) anniversary of this splendid concept, the collage below is my own tribute to the body of water that will forever hold my outermost admiration and appreciation; it is a combination of all the images of this beautiful blue in all its variations; from steel grey to turquoise green, which I have shared here with you in the past.

To me the ocean is an undying symbol of freedom and power, a source of life and hope, inspiration and serenity. It is ever changing, encompassing the variety of human moods, anything from stillness to motion.
Yet, there is nothing more tranquil and purifying than letting one's gaze lean against the surface of the azure blue water, following its curved outline until it meets the horizon, while letting our minds wander and our perception become as clear and deep as the sea itself... 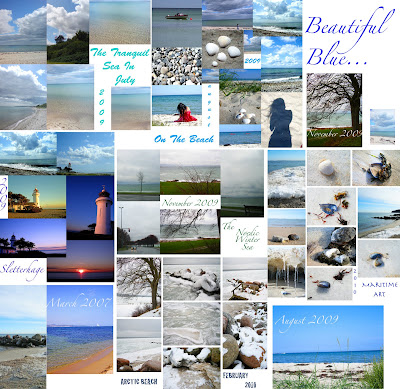 Zuzana: A very nice thought and beautifully expressed, as always! I will now look at the ocean and ponder it further thanks to this post!

beautiful blue.
here on my island around me blue.
the sky, the sea, the doors of the houses near the sea.
you have beautiful day

I love the ocean, especially in Winter, when few people are around.

i am always amazed at how clear the water is elsewhere...now ours is oily too...sad.

Lovely images in your collage. I think the ocean is calling me - my sis in law has a beach house facing the Pacific.

This is a fantastic collage Zuzanna. Ofcourse Sletterhage Fyr is there!!!!

Have a fantastic day while it is raining cats and dogs.

World Oceans Day...a timely annual reminder in light of recent news. We thought for so long that we can take the seas for granted.

Living near the ocean seems so magical to me Zuzana...the sound of it, the pure beauty of it...sigh...I love it so. We are having our holiday this summer at the ocean...I am counting down the days.

This is the first that I have heard of World Oceans Day and I think that is a shame. It should have been all over the media and the internet.

Thank you so much for bringing this to my attention. I'm going to go ahead and note it on next year's calendar.

The colour blue is a very soothing one. I absolutely adored the collage. Zuzana, I love your verve for colour and energy. Keep it going. You are my inspiration!!!!

I always love your posts. I adore the ocean. I don't live that far from the Atlantic so it's nice to head down to the beach.

Zuzana, that is a fantastic collage. I appreciate the staggering variety of blues very much! :)

Whenever I'm on a beach, I love to just stand there looking out at the sea's horizon. It kind of puts in mind of eternity... it feels that limitless to me.

I lived in California for 15 years and spent many wonderful days at the beach there and in Mexico.
Your mosaic & words say it all so beautifully, Zuzana! And I love the shot of your shadow on the sand. :)
Have a lovely day, dear friend!
Zuzu

Happy - belated - ocean's day!! what a great idea!, especially to those of us who are madly in love with that blue body. When I read your entry and saw your amazing collages, I immediately was taken to my visits to our Pacific coast and its sometimes mad ocean. The smell, the sound, the texture...it is so beautiful! I wish I could live near it; it would make me the happiest person on earth.
have a great day!!
*hugs*

I must've drowned in a previous life or something because I have a great fear of large bodies of water. I love your pictures though, so beautiful!

That was a lovely post Zuzana. Your collage is amazing. And you know what, BLUE is my most favorite color :) So I was more interested to read your post just because of its title :)

Have a great day Zuzana.

Amazing collections and a beautiful collage.
Thank you for sharing

Lovely ...it's no wonder why blue is my favorite color!

As always, simply a beautiful pairing of words and images...yes...water brings such peace and refreshment...and your photos have captured it's aesthetic essence so beautifully! Your posts buoy my spirits...thank you, dear friend! Love, Janine XO

The slice of the ocean has a very tropical color to it...tropical with a serving of ice cubes. What temperature is it in the summer? Do people swim much?

Both you collage photo and your ocean photo are so beautiful.

What's going on in the Gulf of Mexico by the BP oil spill breaks my heart. Those waters will never be the same again. :-(

Thanks for reminding me of beautiful, clean waters :-)
jj

Such pristine and beautiful images in your collage.

I think every day, since the news of the monstrous oil leak in the Gulf of Mexico, how our oceans are all connected, and how long before all the waters are tainted because of humans. Hopefully, this is not possible ever, but I worry.

As a SCUBA diver I’ve seen the beauty both above and below the sea.
-
The oceans gave us the beginning of our existence, yet we treat it as a garbage dump.
-
This saddens me especially as I watch millions of gallons of oil destroy its delicate ecosystem on a daily basis.
-
Have a great weekend and may your view of this incredible body of water never be diminished.

Beautiful college. Yes it is definitely symbol of freedom, power an infinity.

I have always wanted to live next to the ocean. The Blue always brings a smile. Awesome pictures. Loved them.
Have a good day...:)

Zuzana! Where Did This Week Go? It's Friday Already! I hope your week has been kind to You?
The Ocean Is The Ultimate Solution!

very well expressed.
Liked the collage and not to mention the images within

Hello Zuzana, Thanks for your sweet comments today. My garden is small, but I love it too. Just catching up on your last few postings--Your photos are stunning. I especially loved the ocean collage and the birch tree progression. You have a lovely way with words, too.

Hopefully your Laurel bushes will recover by next year. Do your beaches fill up with bathers? Does the water get warm enough for swimming? It is so beautiful there, I have dreams of floating around dreaming...Beaches here are mobbed in the summer. Have a beautiful weekend! Hugs-Sherry

wow,that was really beautiful blue on the 1st picture.I have seen like that maybe in Maldive.
In Hungary we don't have Ocean...here in Norway it's so cold,and not so blue :(
Have a supper weekend Zuzana!

gorgeous collage Zuzana...I am looking forward to my vacation at the ocean in a few weeks...it is both powerful and peaceful as you say...I hope to take photo memories home with me. Have a lovely weekend.

Such a lovely post, Zuzana! And your photo collage is marvelous! I also love the turquoise sea--especially in the Carribean! How sad to think of it being polluted and the sea life being affected in such a terrible way.

I totally agree with your feelings about the ocean, I spent the day at sea yesterday and feel so happy and refreshed today :)

I haven't seen an ocean for a long time, now.. not since the early 80s. I think I'm due! Beautiful photos and lovely description of the vast, watery expanse.

Michael, Alberto, Nessa, Ola (welcome), Brian, Keats, Elizabeth, Paul, Jill, so NOT cool (welcome), Susan, Keith, Tony, Zuzu, Claudia, sprinkles, Sukanya, Regina, Betsy, Janine, Dan, Stevie, Sandy, Joanna, Tina, Scribe, Rajesh, Mr. Stupid, Mel, tony, Sumandebray, Sherry, Kata, Laura, C or V, Eternally, and Hilary, sorry for my very belated reply to your wonderful comments.
You shared some very nice sentiments about this big beautiful blue and the importance of the oceans of the world. I think we all watch painfully the news and the ever growing ordeal in the Gulf of Mexico.

Thank you also for your very kind compliments about the collage. For those who can find this interesting, I would like to add that all of the pictures in it depict the Danish sea shore, which can indeed look anything from tropical to arctic like. Scandinavia harbours the most beautiful natural wonders.

I love all your visits and cherish the fact that you always take the time to stop by.

you never ease to amaze reads with your 100% quality writing or reflections...