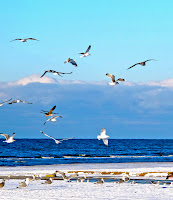 As Lady Winter steps into mid reign, she tightens her icy grip and throws us into deep freeze.
Yet this fourth season is simply enchanting in its raw beauty - the sights appear so fragile yet the conditions are so unyielding.

Setting out on a short walk along the pristine shores of the North Sea, we were greeted by snow-covered alabaster beach, clear baby-blue skies, frozen ochre colored surf and lazy indigo waters. The waves were hitting the coastline so very softly - a rather unusual sight in these parts.
The arctic air streams to us from Siberia in the far northeast, leaving the usually raging westerly beaches atypically docile, sheltered by the sandy dunes.

We savored the assembly of three elements - frigid air, icy cold waters and frozen earth - while the brave seagulls took to flight, completing an unforgettable, natural sight that left us almost breathless... 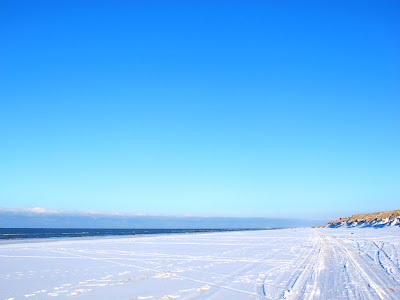 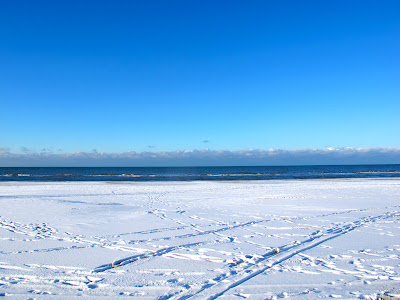 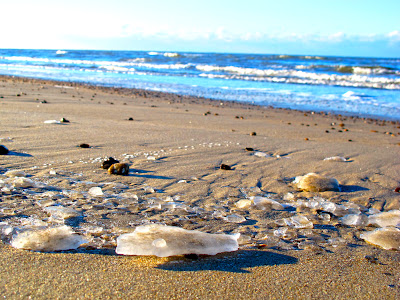 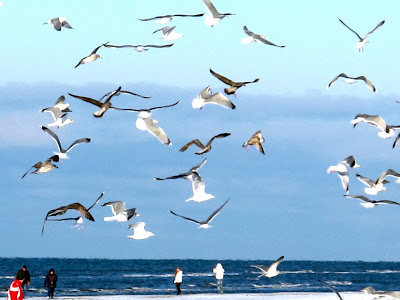 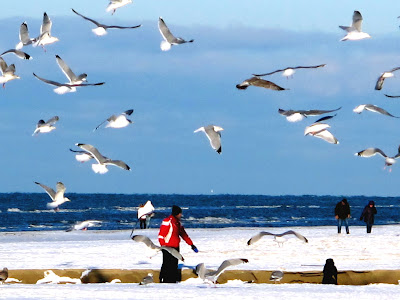 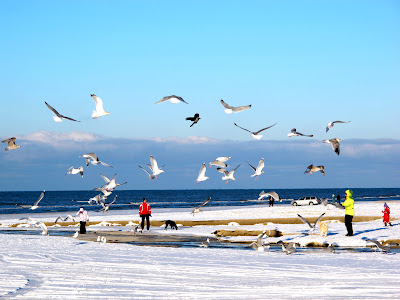 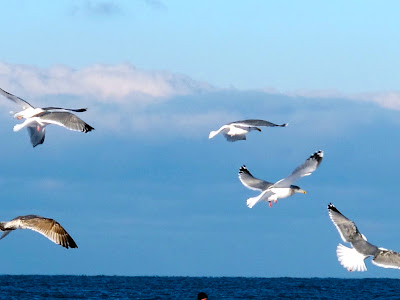 smiles....a lovely scene....i love the coast...no matter the season...we just got snow here this week ourselves so it finally feels like winter....and a cold front this week that will keep it in the teens this week...after 74 last week, its frigid...smiles....hope you are doing well friend...

I have never before seen snow on a beach, how my 2 dogs would have loved that!
It's a balmy -1'c here, with night temps down to -4'C. the tor looks magestic with it's covering of snow.
Stay warm lovely girl x

Amazing captures of the coast in winter, Zuzana:)

Snow and the sea! What fantastic photos Zuzana. It looks COLD! We have no snow but it is chilly here. We've been having a fire in our fireplace every night. Nice and cosy and warm. How is your house hunt going? Before we know it spring will be here.

The photos are beautiful Zuzana and the way you describe the season almost makes me want to enjoy the frigid weather. Still, I don't like cold,so I'm happy to enjoy it through your photos. Thanks for posting and hope all is well with you.

I can't get over that blue! It's amazing! Happy winter...stay warm! xo

Whoa! It looks as cold as it is beautiful.

Beautiful photos Zuzana!
I've only once seen snow on a beach here, it is majestic!
It's nice that people go to a snowy beach, though you may not agree!
Keep warm!

Wow ... what beautiful scenery! The blue sky and frigid water are such a vibrant shade of blue.

Most that know me understand that I am not much of a beach person. But your snow covered beaches may just change my mind.

"Hey Jerry. You wanna' go to the beach?"

"Yep. As long as it is that snow covered beach in Denmark that is buffeted by that Siberian wind graced by the extraordinarily beautiful Zuzana strolling by."

Wonderful set of images. I liked each one of them.

Thanks for sharing with us the beauty there Zuzana. I live in a land-locked state, so even beach scenes with snow are a welcome sight for me.

So many people wish they could completely skip over winter. But some, like you dear Zuzana, understand it's beauty and gifts! Enjoy!!!
Hugs,
Zuzu

What a stunningly beautiful place! Winter does indeed have many beautiful sights to offer.

OOOh looks very cold lol You captured it well.
Here in BC its not so bad Of course we are in the southern part I am sure going further north is much colder. We have no snow.
The other day I tried to look at the trees and saw little balls of water on the tips of the branches and tried picturing them frozen.
Have to see if the bunnies are still around.

Such a beautiful post and I loved seeing your gorgeous photographs.
the blue of the sea and sky with the seagulls soaring around is amazing.
Love all the wonderful white snow too.
Do stay warm and enjoy the week
hugs
Carolyn

I love the way you describe winter. With respect and joy. Winter at the beach is a wonderful experience. Thank you, my friend.

What stunning shots of this amazing scene. A perfect winter's day and quite unusual to see snow on the beach.

Fantastically beautiful pictures! The colours are just perfect, like a dream of winter.

The birds add a relaxing and magical element, Zuzana. Thanks for sharing. xoxo! :)

Brrrrr! So much beauty and such a cold day! Yikes. Stay warm.
xo jj

These images make me think that maybe I would like winter better with an ocean view? Probably not, but this beauty you've captured certainly makes me wonder :)