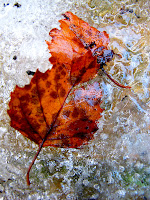 Lady Winter took a small intermission this week. Perhaps her reign has been so intense in the past two months, that she needed an interlude to catch her breath, thus causing her to slightly loosen her icy grip.

Warm, humid air, almost alien at this time of the year, streamed for days over southern Scandinavia, prompting almost all the snow to vanish, as if it never been there at all. The bare ground - so unusual to our eyes, which are used to the white cover - exposed two simultaneous seasons.

Broken twigs and putrefied leaves and remains of flowers from our past autumn emerged through the melting ice. Silent symbols of the moving time, moments of the past locked in frozen water and preserved under snow.
The retreating snow cover however also disclosed signs of renewal as well. Fresh buds and the stalks of crocuses, pushing upwards through the temporarily soft ground, bearing witness to the imminence of spring.

The seasonal change is still far removed from our reality and winter is far from done yet. Still, this short interlude was a beautiful reminder of one unmistakable fact; despite us still being in depths of the cold season, the preparation for spring in nature has already begun. 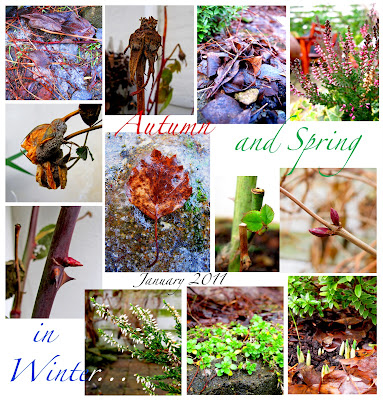 The preparation has indeed begun! we can see it here too.
When I began reading about the snow melting, I was thinking it revealed lots of necessary repair work on roads etc, but your beautiful words were so much nicer than that.
Love the autumn/spring collage too Zuzana, the colours of nature, whatever season, always blend so well.
Hope you're having a beautiful weekend.

I wish you a wonderful Sunday Morning, Dear!

That´s what we have a few weeks before. The whole snow was gone and in the first moment it is dark- grey and the grass don´t looks very inviting. It´s Tiffy´s first winter and after those weeks full of snow she was so afrait about that dark garden, that she wasn´t able to go into the garden. She run back immediately to the door- really funny...

Enjoy the knowledge, that mother nature is working hard to enjoy us in spring again.

I hate snow and when it´s cold outside- but on the other hand it´s really wonderful to have the time in the house without any work in the garden :-))

Now I will have another cup of coffee and then I have to finish my fairypainting...

That was written beautifully :)

What a beautiful and poignant illustration of life and time.

Warmer says in Scandinavia and snow days in Hawaii, weather is so interesting and unpredictable. I still love the fact that no matter how smart and clever we humans are we cannot control or perfectly predict some things and weather is most definitely one of them.

We haven't had much snow yet this winter. This may not bode well for our spring. Winter moisture is a good thing so I'm hoping we will still have a couple of snowstorms before winter is over.

"Silent symbols of the moving time, moments of the past locked in frozen water and preserved under snow." Oh Zuzana I love this line!!!! And the photo as well of course....you may think of yourself as a scientist, but my dear you are equal parts and artist:)

Interludes as these are always welcome, aren't they? I hope you are enjoying this interlude. But Zuzana are you sure it is just an interlude or will it stay? Time will answer.

I miss the changing of the seasons. Around here, everything looks the same. It is only when temperatures are mild and pots are filled with flowers that we know a sense of spring time temps are at hand. Summer temps are way too high for much plant life. I did see the full moon exactly opposite the rising sun this morning. Such a lovely site. Best wishes and blessings, Tammy

I'm sure you've enjoyed the warmth while you've been able to do so. It's nice to be reminded that spring is just around the corner.

At the moment we have a little bit of sunshine after a foggy day.

Lovely shots. We had a warm spell last week - but back to good old cold and sun.. today was magical with ice and snow and sun and finally - we could go on the ice on the lake as it is now thick enough due to the melting of the snow covering it.

So many very beautiful images in your collage.

Beautiful pictures!
It's nice to have those interludes in winter, isn't it?
I'm dreaming of spring and warmth but still want to savor the season we are in, even though some days are sooo COLD!

How wonderful to have a brief reprieve from a bitter winter! You have probably have guessed by now that winter is NOT my favorite season. It has been colder than usual here with a couple of little snows--mild in comparison to what you are used to. I'm such a cold weather wimp!!! lol
Seriously, I do not care for winter at all. Reading about the mother dog and three puppies who froze to death here recently epitomizes the cruelty of winter(and neglectful people to me. I am anxiously awaiting the budding of trees and flowers and singing of birds--the promise of Spring and even better--Summer! V

Welcome the goddess of the moon and the night,
Bless us with wisdom, bless us with might.
Give us tonight, the power to heal,
The power to release the magick so real.

Posting on a Sunday, I'm not used to that! I just finished up the last of my overwhelming load of homework and was perusing my blogger dashboard when I saw your post.

It's actually getting a bit warmer here too. Still not warm enough to walk around out there without a jacket but just enough to remind me that spring is just around the bend if I just hold on a little bit longer.

It's still early in the year though so I keep thinking it's the calm before the storm. Hope not!

Lovely post...I am hoping Lady Spring
visits soon and stays around for a season...

the same seems to be happening on my side of the planet.
can't wait for it to just be WARM
- Sy

Your words have me relaxing at the thought of this. Mother Nature is putting us through our paces. Oh, for the relief, for a gentle and light-hearted embrace.

It's nice that you had a little break in your weather. That makes things a bit more bearable. Your photos are all so lovely : )

Wonderful collection of images. I am glad the warm days are back, even for a short span.

Waiting forthe preparation of the spring for my heart yet..very nice write Zuzana

Winter seems to be put slightly on hold in my part of the world, but then again this might signal an early spring being in store for us.

Always enjoy all your visits and wonderful words, thank you dear friends.

Wow.. beautiful and lucky you. We're in a really cold snap at the moment but you're right, it won't be TOO long until we head for spring. Hopefully.

Beautiful pictures! Our "heat wave" of 20 degrees is starting this week... Hope you have a great week!! :)

Hilary and adrielle, thank you ladies for your lovely comments - now lets hope spring is arriving early as we all three live in areas where winters can be severe - and it seems we all three are not too fond of winter either.;))
xoxo

Crocuses seen pushing up??!!!
What a joyful sight that must be, but I can't imagine seeing that here for at least another month or so....
I am glad to read you have gotten a little respite from the truly wintry weather where you are, Zuzana.