In August the plants in my garden are in the end of their growing season. The most abundant of them at this point is the lovely Caprifolium that is blooming with hundreds of flowers. It is as if it knows that the days are getting shorter and tries eagerly to capture whatever remains of the warm August sun.

Usually, during this last month of the summer, I trim all my evergreens. The bushes lining both my terraces have by now ceased to grow and need to be prepared for winter. They can still be trimmed all the way until October, but before the arrival of the first frost.

I also have two Boxwood plants. This is also an evergreen, very common plant/bush in Scandinavia, as it is very sturdy and grows without trouble in our temperate climate. It can withstand the long winters and is often used in parks, where it can be formed into shapes for decoration.
One of the Boxwoods I own was given to me by my parents. It was initially growing in their own garden, while they still lived in Sweden. A few years back they uprooted it and brought it here and planted it on my terrace as a gift . It was very small at that point and has grown a lot over the years. I have cut it back each season, but have always been a bit unsure about how to trim it. My other Boxwood has a naturally round shape and has been trimmed into a form of a ball every August. But I never knew how to trim my parents plant.

This year I drastically cut it back a lot. I decided to form it in to a shape of a cube. At first I was a bit worried that I cut it way to much, but now I think the trimming was definitely an improvement. 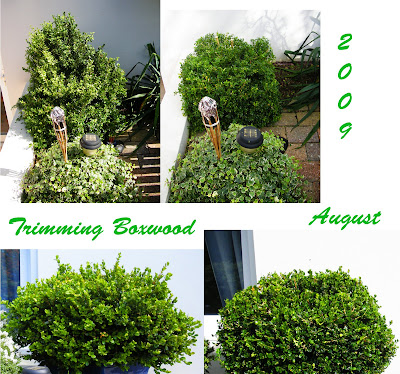 How wonderful to have something brought from Sweden to grow in your own yard. When I was young, my dad brought a few trees up from Cape Breton to our house in Ontario. It was nice for my mother to have something to remind her of home.

You've done a great job on the boxwood, Protege.

Your boxwood is very well travelled! I think it looks good with a haircut!

Your advise is very useful! Love it! x

How great to have the boxwood come from Sweden to grow in your garden. They both look very nice.

We have two boxwood on either side of the walk in the front of the house. I trim them in the shape of a ball. They look so nice in the winter when not much else is green.

My father in law says keep a garden and you will never be bored. How right he is....

I get the feeling of *Breakfast At Tiffany's* meets *Sex In The City* from these shots.;)) That is the loveliest comment to receive, wow thanks, Honey! ;)

The trim definitely improved the shape of your boxwood. I have a couple of boxwood as well. Funny to think that this plant does well in two such diverse habitats. We are enjoying a rare mild day in August. Humidity is low. We have a nice breeze and the temperature is in the low 80s. I'm going to an outdoor party tonight. It should be just right to spend a few hours outside.

It's so nice to have plants and bushes passed on from other people and places. Have a lovely weekend.

What a sweet thing for them to do. And I agree that it looks great with its trim.

beautiful.
i love these green plants.

i don't have the green thumb. (sad)

Even though your parents are now back at their home, at least you can think of them every time you see(and trim) your boxwood plant. Both of the plants look healthy--especially since it's now August and here, at least, some plants in the garden look exhausted and worn out.
Why don't I have such a plant yet? I love their glossy little leaves and compactness.
Hmmmmm...you may have inspired me to find one soon...

I think it looks great after your trimming job.
For stand alone trees round is perhaps the most acceptable as well as neutral shape.
It was a nice gesture to get a tree all way from Sweden.
Have a great weekend

=Kat,
what a wonderful sentiment to bring back trees. I so understand that... Thank you for a lovely comment.;)) xo

=Jeanne,
thank you, glad you like the haircut.;)) xo

=MelRoXx,
thank you so much; glad I could offer some words of comfort.;)) Hope you feel better.;)) xo

=Donna,
that is it; I love the evergreens as they stay green in winter. Always love your visits.;)) xo

=gaelikaa,
yes, he is right indeed; thank you for all your generous comments.;))
xo

=Erika,
ah, glad that you liked that.;))) The pictures of you are always stunning.;) xo

=stevie,
yes, some plants do very well in a diverse climate.;)) I hope you had a wonderful evening at the party and are enjoying a nice laid back Sunday, still with low humidity.;)) xo

=Joanne,
I agree; likewise wishing you a lovely weekend; or what is left of it.;)) xo

=Hilary,
yes, my parents are sweet.;)) Glad you like the haircut.;)) Always appreciate your visits dear friend.;) xo

=Tina,
so good to see you back.;))) Let me know if you get Boxwood, it is such a great plant and I love that it is an evergreen.;))
Have a great Sunday.;) xo

=Sumandebray,
thank you; I agree on the appeal of round shapes, or at least geometrical shapes.;))
Likewise have a lovely Sunday.;))

We have that plant here in Guatemala, and as in Scandinavia, it's usually used in parks and front large gardens in decorative shapes. I came to prune my plants some weeks ago, not to get them ready for winter, but to save them from horrible plagues due, in my opinion, to the lack of regular rain.
I think it's a wonderful thing that you have a piece of the past in your present in the shape of a pretty plant.

=Claudia,
how interesting that this plant grows in both our countries. Sorry about the lack of rain, I hope your Boxwood will survive.;)